An Ellipsis Experiencing Phantom Excitement In a Sentence Limb

First, a problem of definition. This latest catch-all of Amy Gerstler’s, Ghost Girl, is really less a “book of poems” as such than it is a bringing together, a propulsive gleaning of all the notions of a poetic nature that happened to pass her way since Medicine, her last such collection and the eleventh to appear before the one under review. Gerstler’s notions are caught on the fly, like threads trailing from the muse’s hem. Though elaborate in their conceit, they may not toil much, but they more than make up for it in the amount of spinning that they do, and what they spin is the essence of the spinmeister’s art whereby blogrolling is loomed into poetry and surpassing cuteness into a macramé version of profundity. As any peruser of the Gerstler string of pot-pourris knows, she is adept at the kind of evocative miscellany that preens and postures like the “poetry” it is, rather than trying to measure up to the thing uncoseted by scare quotes. For example, efforts like “Circus Poster” never quite shed the skin of you-know-who’s Flying Circus: 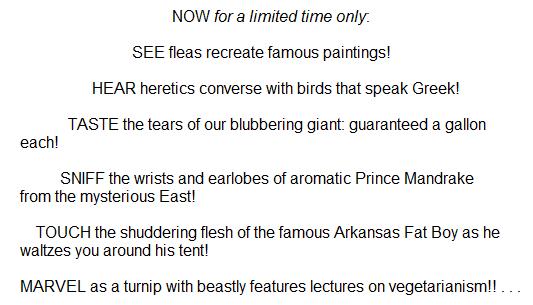 Or offer the constituency for such blague-ridden music hall-isms the Full Monty of dickwad it paid for.

At any rate, the notion floating this return of the return-of-the-repressed in Gerstler ends by reducing itself to whatever “lock and load” translates out to among urban neurotics driven to the edge by a surfeit of Sex in the City and Six Feet Under. The final resting place of such revenants (in the literal French sense of that which returns again) in the mindspace of the ideal reader as imagined by Gerstler is, no doubt, life whittled down to cineplex fantasies and their bemused flipside, mall-mom “wish I had’s.” (In that post-Lacanian Wonderland where revenants is duly italicized and which we now longer hold converse with, the whole phenomenon is quite sensibly chalked up to nostalgie de la boutique.) Clearly, Gerstler is hip-deep in that zipless outback safari tours were once given the run of in the salad days of Erica Jong, when women’s liberation was more than a Cloud Nine waltzable down memory lane on The Jane Pauley Show. If she harbors a mall mom’s nostalgia for hip huggers and miniskirts, it’s a higher octane mix of raunch than is perhaps fitting for a laureate of Gerstler’s standing. Not for her the dizzying indecisions of an earth mother unsure of how to prompt the dousing rods to sink. If demonstrations are needed, check out this praying mantis’s invitation to a beheading, “Buddha Sonnet 3”:

He had so much dirt under his nails
I had to lay aside his rake and fuck him
right there, beside the zinnias he’d been
planting, our heads full of the scent
of turned earth and the worms’
choreography. Soil’s made of death
mixed with perpetual foreplay, like a pond’s
dark, teeming surface. If the buddha keeps
his back to you, seduce him. Kiss his rough
stone face, worn lips, calm nose. Make him
go five days without sleep, till his mind’s
a bleary mess, till his thoughts are sticky beads
of moisture clinging to a rotting leaf, destined
to live again and again, despite its misgivings.

What of the well advertised preoccupation of this collection that gave it its suggestive title, Ghost Girl? On the basis of the impression conveyed by its jacket illustration, of a blindfolded young girl with her hand on a moveable armature fitted with a writing implement, one really shouldn’t judge a cover by its book. Skimming Ghost Girl, anyone would think it was Gerstler’s considered opinion that spooks, spectres, phantasms, apparitions, phantoms, poltergeists and other haunters doubling up from deep in our unconscious not only play a role in our creative effusions but dominate them through the agencies, faculties, interventions, or what have you, of chance, coincidence, Ouija-board semiotics and even (perish the thought if you’re a established poet and PEN member) automatic writing. She picks her way through the ‘brakes and undergrowths of Ghost Girl’’s hardly occult thematics with the aplomb of a pro sorting through cons. Little appertaining to séances or the like bubbles to the surface of poems such as “Buddha Sonnet 3,” but then, poems like it are all surface to begin with and so there are no depths from which anything can bubble up. Still, there remains enough sap or ichor in “Buddha Sonnet 3” to give an enlivening turn of the screw to what is plainly for Gerstler the dry run of a reasonably vivid wet dream. And the same is true for the absence of anything spectral in those earthly delights that come calling (and vice versa) in the piss-elegant, if X-rated, “Ode to Semen”:

Like a divining rod, Gerstler is drawn to things that gush, pour, course and flow. Which perhaps explains why she harbors a taste for poems that, as she puts it, “spill off the page.” One poem is actually called that and perlocutes what its title lays claim to. Purporting to supply “A List of Answers to the Question: ‘And what, pray tell, were you wearing?’”, it flims and flams its way through a labored parody of Q & A, but not before all but drowning the reader in the sardonic effluent for which the Gerstler poem is justly famous or infamous (feel free to check either), and which in this instance consists of “Satyr horns,” “Sackcloth and ashes,” “My heart on my sleeve,” “My spleen on my garter,” “A crown of pink cactus flowers,” “A cape made of a huge potato pancake,” all the way down to “A surly Marxist’s tight-lipped rendition of lamentable events” and the item that actually runs off the page, “My hair done up in the Spanish manner. A lilypad hat. The feel of your long absent hand o”. . . Let no one say that Amy Gerstler is not a woman of her word, even when it’s no more than an ellipsis experiencing phantom excitement in a sentence limb that is there only in so far as it exists in the dirty mind of Gerstler’s reader.

By this time it shouldn’t be hard to predict what is likeliest to send this poet’s Ouija board hurtling into overdrive. Yet we should refrain from rushing to judgment about what makes Gerstler’s innermost clock tick over like the trusty Timex it is. Sex undoubtedly figures prominently in her calculations as to what propels a poem into full energetic orbit, but it isn’t everything. Or at least not quite everything. In the verse world over which she ranges like a raunchy apartment complex’s concièrge, the persona-in-chief admits to being prey to Vendettas of the Phobic (prose-poemed in “The New Dog”); to the agenbite of mother wit (paraded in “The Floating Woman”); to Assaults Launched by the U.S. Postal Service (as described in “An Offer Received in This Morning’s Mail”); and is especially susceptible to the Siren Calls (of male voices) Liquified By Pure Yearning. “Falsetto” limns the last of these with an etcher’s trenching tool:

A guy with a heavenly singing voice like Al Green’s
can make you believe he’s being melted alive, liquified
by pure yearning. The result is a kind of bee-less sung
honey. The singer I’m listening to this hot summer noon—
Dean, or is it Gene—sounds like he’s auditioning to be
female. No, it’s more like he swallowed a woman whole,
without even mussing her lovely hair. Now their duets,
entwined laments, spill from his lips, reveries of what
each has embraced, squandered, fucked, drunk up. . . .

Gerstler clearly has a talent for baring—albeit in verse not always firmly sutured to its poetic means—the inadequately scrubbed underside of bardic pretentions. She has a fine eye for the short-lined passe-partout and can twirl whole rings of them with the flair of a Greek Anthology chickenhawk crying his lost lays to dactylic heaven. One of the best of her amiable debunkings outs itself “In the Aspirin Orchard,” where a laconic lilt rights rather than subverts the ironies of a world deprived of pain and all its pedagogies:

disguised as religion, robed in blessed
caresses that address every last malady.
Reckoned rightly, all suffices. . . .

On balance, Gerstler holds her own in a crowd—ever thickening—of glibsters who give every indication of believing that the game they’re participating in is the final round of Last Poet Standing. At least, her model for such competitions isn’t Jay London, a comic whose rough-cut jib seems determined to prove the Loch Ness monster actually exists and whose delivery in two-and-a-half-minute bursts (all the bit-time the show’s contestants are allowed) adds a new, utterly unintended meaning to “gag.” Like recent Ashbery and its clones, the poetic line she favors is flung so far outwardly that it defies all efforts to rein or reel it in, but unlike Ashbery, Gerstler lacks the wherewithal to dredge music from what is not much more than ear wax. Occasionally, her ear is more sure and, even if the occasion is itself salted with false flame, the glitter of fool’s gold glows almost as rivetingly as the real thing, which these confectioner’s parings from “The Pastry Chef’s Daughter” mouthwateringly demonstrate:

. . . Papa once
presented his nuns with a pumpkin mousse
Tower of Babel in a shallow lake of vanilla
crème anglaise, adorned with chocolate shavings.
What an offering. I’d like to believe all our efforts
in the world, however humble or exalted, are forms
of prayer, like Pap’s worshipful, spirit-raising
pastries. Who’s to say celestial insight can’t ride
into the mind on a forkful of cherry pie?
Those who have kissed a thousand sugary mouths
or gloried in brioche glazed with apricot jam know
the tongue can serve as the soul’s welcome mat. . . .

More depressingly, other moments reveal the dipping range of Gerstler’s imagination to be as deep as that of a Valley Girl plumbing Bullfinch’s Mythology for “high points” (“The Oracle at Delphi, Reincarnated as a Contemporary Adolescent Girl”); or a Disney Studio flack for fresh ideas (“The Ogre’s Turbulent Adolescence”); or of a get-even chick nursing bedsores from too little rather than too much attention (“Fuck You Poem #45”).

Beyond the multilogue “in five visitations,” (“On Wanting to See Ghosts”) the subject zone nodded at by Gerstler’s title is really only pursued once in any depth. Nothing spectacular, as it were, may be observed rearing its head or clanking its chains, which again raises the issue of why so many poets today believe that a catchy title offsets any multitude of sins indulged between book covers. Some of us would like to see a return to that state of affairs when “New Poems” (or something equally spartan) sufficed to reinflate a reputation having temporarily fallen on times out of mind. That said, it seems safe to predict that Ghost Girl will succeed in levitating its author into the limelight, even if only for the brief time it takes for the eyeball of fame to wink its Warholian wink.

James Rother studied at McGill University and the University of California at Santa Barbara. His critical work has appeared in Contemporary Literature and the American Book Review. He is a professor of literature at San Diego State University.
View all posts by James Rother →
Bookmark the permalink.