Of Phonographs and Oily Birds

As Reviewed By: Jan Schreiber

There are poets who tell it straight and those who are oblique. The Scottish poet Don Paterson is oblique— and you might as well get used to that at the start. Whether you like your poems oblique or not is a matter of taste, but if you don’t, you close yourself off from a lot, and in this case there are some rewards. Here is a poem called “Bedfellows”: 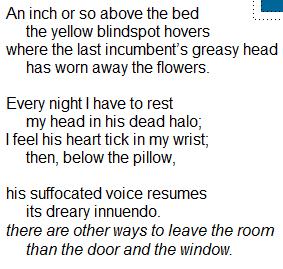 Is the scene literal or metaphorical? Is the last incumbent oneself or someone else? Are we thinking of leaving the room by imagination or by death? What does the room represent, after all? To ask these questions is the suggest the complex workings of the poem—its depth, its mystery, and from some viewpoints its frustrating irresolution.

The quotation also illustrates Paterson’s formal dexterity. The meter is not rigid but it is always perceptible. The poems usually are rhymed, but the rhymes are inexact, the degree of precision varying with mood and need. Half (or slant) rhymes are more common than full rhyme.[private]

The book evidently includes poems written over a considerable period, and many in the first half are clearly a young man’s production. By that I mean that they contain a high quotient of sex, anger, and self-obsession. Here is the last part of a poem called “Buggery”:

as if the faces of the drowned
might turn up in the harrow:
hold me when I hold you down
and plough the lonely furrow.

But there is control here, too. It may not be a great poem, but it’s a good one.

For anger, consider “The Elliptical Stylus.” The poem narrates an attempt by the poet’s father and uncle (and the poet himself, presumably as a boy) to buy an elliptical stylus for the father’s record player. They were aware that such a stylus afforded superior sound reproduction, but not that it could be used only with certain tone arms and turntables. The poem (this one is not oblique in the least) says that the clerk in the stereo equipment store was contemptuous and smirking as he sent them on their way with a handful of old-fashioned phonograph needles—all that would fit their outmoded equipment. To protect and defend his father, the poet is ready to lash out at everyone, including the reader: 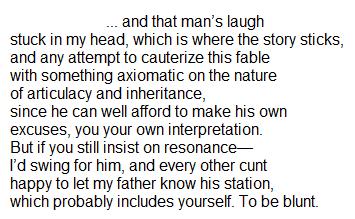 Well, it’s a strong rhyme, to be sure. Missing are the reasoned, thoughtful, generous and inclusive perspectives of a Seamus Heaney. Present instead is a young man’s readiness to pick a fight: a filial loyalty and a short fuse.

Yet there’s a further ground for speculation. This unusually concrete poem is about an elliptical stylus, which is Paterson’s usual style, or manner. “If I want an elliptical style,” he seems to be saying, “you have no right to deny it to me.” Have readers or reviewers needled this man, telling him he must upgrade his equipment before he can lay such a claim? If so, he reacts in this book with a vengeance: Who are you, reader, to tie the poet to your outmoded grammar phone?

Another illustration of the egocentric poem is “Filter”:

How much interest will a reader generate in the poet’s urination? Or in the fate of the black hue of the stout he drank? Or in the metaphorical meaning (if any) of its disappearance?

Similarly, in “Morning Prayer (after Rimbaud),” Paterson constructs the sestet of his mostly unrhymed sonnet thus:

Having stomached my thoughts like a horrible linctus
—swilled down with, oh, fifteen, twenty pints—
I am roused only by the most bitter necessities:

then, the air high with the smell of opened cedar,
I pish gloriously into the dawn skies
while below me the spattered ferns nod their assent.

So, it seems, bitter thoughts turn clear and glorious when filtered by the poet’s noble kidneys. Are you impressed or amused? (These are not the only options.)

In spite of lapses into trivia (those cited are not the only ones), the collection has energy, wit, and at times a kind of metaphysical ingenuity. Paterson has the faculty, not uncommon in contemplative people, of imagining himself in other realities, or imagining that the reality acknowledged by his peers is only one arbitrary one among many possibles. He introduces a long poem called “The Alexandria Library: Part II” with this epigraph from François Aussermain:

Before I set pen to paper, a preparative: I close my eyes and imagine myself in another library, where I am sitting with my eyes closed, imagining myself in this one. Being, like most men, far more impressed by the simulacral than the procession of shabby realia with which we are daily confronted (it being only in the former that we ever truly rejoice in the hand of the creator), upon opening my eyes again I affect a genuine astonishment at the pathologically detailed universe my imagination has brought into being. Of course I have done nothing more than return the world to the world again, which is the same as rendering it to God, or whatever deranged Caesar happens to be holding the reins today ….

and you will never know, since you cannot remember
whether you’d sat in the train or the library,
if it was the page, or your hand shaking.

There is an extensive literature of double vision, layered consciousness, to which this poem contributes. When the envoi says, “Someone appears to be using your mouth / to scream through,” are we to see the writer as the gods’ amanuensis or a spaced-out kid? Is there a difference? I note in passing that this poem is dedicated to one M.D., called “the bigger fibber,” an epithet no doubt intended to recall Eliot’s reference to Pound as “il miglior fabbro.”

There are several references in this book, and a whole poem, to the candlebird, a “generic name,” the author’s note says, “for several species of seabird, the flesh of which is so saturated in oil the whole bird can be threaded with a wick and burnt entire.” The idea of being consumed as one gives light has great romantic appeal. The motivating figure is from Abbas Ibn Al-Almaf, an eighth-century poet who imagines another lover saying his verse to the poet’s beloved, then asking, “Now tell me: flesh or tallow? / Which I am tonight, I leave to you.” And dropping the quotation marks, the poet addresses the same question to the reader. So we see our reflections in endless mirrors.

And indeed the candlebird image is mirrored among the new poems in this collection, in a poem called “St. Brides: Sea-Mail”:

The poem tells of a place where oil is harvested from seabirds, then the birds are dried and later, in a kind of ceremony or game, flung out from cliffs over the harbor. The narration is grave and pensive in recollection, hovering deftly between personal history and allegory, but leaning slightly leftward. A nicely managed rhyme scheme; an easy meter, and a slightly mysterious surface combine to create a poem of intrigue that rewards persistence. We remember Yeats’s wild swans at Coole. This would not be the first time a bird had been likened to a poem. The last stanza:

Why parliament? Remember Chaucer’s Parliament of Fowls. The great gathering. But we’ve been burning our birds, or killing and drying them. They are scarce. The wind is weak. Take note, the poem says, for the future is in doubt.

But to see how great a compliment is the appellation “the bigger fibber” we should turn to the title poem, which is the last poem in the book and evidently one of the newest. It is, I would say, an unqualified success, and it makes me, at any rate, ready to forgive the excesses and divagations of many earlier poems. In a series of four-line stanzas, each consisting of two rhymed, loosely pentameter couplets, Paterson propounds a metaphysical problem in the manner of Donne: our way of seeing makes things what they are for us; therefore detachment from the world of things and of human relationships is an offense against love itself.

He means the opacity that can stop sunlight and thus cause an object to stand out as an individual. Transparency is the supreme withdrawal.

But consider this: that when we leave the room
the chair, the bookend or the picture-frame
we had frozen by desire or spent desire
is reconsumed in its estranging fire …

and therefore we lose touch—and when we choose to re-enter the world, it may be quite a different place:

But it is impossible to be in touch with everything: the attempt to do so dooms us to insensitivity, the numbing of individual response. Therefore we must have recourse to speech:

Only by this—this shrewd obliquity
of speech, the broken word and the white lie,
do we check ourselves, as we might halt the sun
one degree from the meridian …

where it will still cast a shadow and thus show us our reality. It is our very imperfection— of language and of humanity—that, by individualizing us, makes real intimacy possible

… then wedge it by the thickness of the book
that everything might keep the blackedged look
of things, and that there might be time enough
to die in, dark to read by, distance to love.

And yet a final paradox: this poem, Paterson’s most thoughtful, inclusive, and truly selfless achievement in this book, is also his most humane and genuinely affecting. We look for more like it.