The Critic’s Pleasure:  To Say What One Frankly Thinks

The Return of Pleasure by Martha Elizabeth. Roth Publishing, 1996.

As Reviewed By: Devesh Patel

I have never read Martha Elizabeth’s poetry before, but on the back cover of the collection The Return of Pleasure, one reviewer notes that “[r]arely does one read a book of poetry that gives such easy delight… ” I disagree. While clever, most of her poetry seems unfinished. The poems are short and do have a certain charm but most are ultimately unsatisfying.

The collection is divided into three sections of roughly eight poems each: “Close Enough,” “Stirred and Exhausted,” and “The Return of Pleasure.” A wonderful triptych, but the poems do not follow the pattern. Ostensibly, the bulk of her poems regard memory’s relation to time and feeling. I like her subject, especially for poetry. However, all poetry is selection and arrangement. Ms. Elizabeth has problems doing either well. To borrow a line from “Basics of the Dance,” her ambitious poem, “I remember the tone but not the words…” More to the point, her verse usually contains one or the other, but rarely both. Consider fully the poem “Old New Year’s,” which starts with an epigraph:[private] 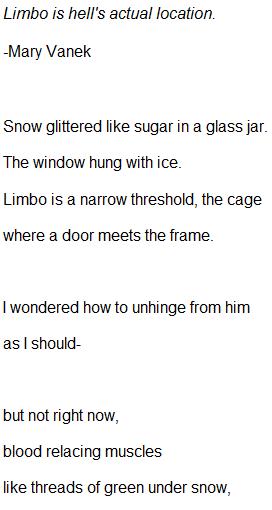 While this is one of the better poems in the collection, it has problems. “Old New Year’s” what was my first reaction. What is the relationship between the poem and its title? Or for that matter, between the epigraph and the poem? Ms. Elizabeth does not say.

More importantly, I am not sure why these images are put together in the order they are or to what effect. As poetry goes, the first stanza provides an intriguing distance and perspective. But later in the poem, where are we? The images jump back and forth from perspectives of being cold (I presume outside) to being warm (I presume inside) without ever concretely expressing what is at stake. I love symbolism but the relation of the nature imagery to that of the lovers’ bodies can be said to hang rather loosely–not to mention the door. The icicles may be well hung, and the door hinges might be unhinged, but is the object of her thought–that is, her lover–even there?

Important details are left poorly sketched, which might have served as graphic counterpoint to her thoughts. As a result, the poem is full of interesting ambiguities (confusions), but none derive from careful economy, as much as loose and clumsy design. I have come up with a complex theory, the brilliance of which rests on the cantilevered line regarding a “lens”, but I am sure it is more the voyeur in me than it is the Limbo of Hell. Either way, if I am wrong, I hope not to suffer for it.

I believe Ms. Elizabeth’s imaginative powers strain to say too much regarding images not worth much. She recreates the most general human emotions in a fashion similar to a propagandist. These realistic poems–they have real details and objects–mostly relate a blandness, usually the dull occurrences and thoughts of everyday life exaggerated for melodrama. (And I even like dullness, when properly treated.) In addition, she digresses pointlessly far too much. Though I cherish this trait in prose, it is anathema in poetry.
“O rose thou art sick” is a lot different and better, I think, than the over-board exaggeration (one which I have constructed for the reader’s benefit and my own), “O crimson rose you have a malady– a withering illness, which reticulates your petals and blunts your thorns and makes you look kind of unappealing and…speaking of unappealing, my lover who makes me think sometimes, but more often makes me remember, but never lets me forget and is never far from my thoughts and does this thing with…” Well, perhaps, Ms. Elizabeth might not have used the word crimson. Such poetry requires an unusually strong anchor to prevent the words from floating away like so much flotsam and jetsam. If not, then both reader and writer alike will be at sea. Somehow, one is expected to accept these problems and feel the kinetic (static?) energy which her poems generate. Unfortunately, I could not ignore them and am left wondering where the reader’s pleasure exists. It may be petty to note the most egregious lines, but they best illustrate feelings improperly and laboriously formed. These are from “Basics of the Dance:”

I’m not the Empire State Building
you can’t climb all over me
waving the other woman in my face.

Nothing destroys mood more than a contemporary cliché. I wonder who is King Kong to whose Fay Wray or who really goes anywhere in the Empire State Building except the observatory? Besides, doesn’t everyone want to be a phallus, or so I’ve heard? Well, maybe those few dissenters join Ms. Elizabeth, and observe instead. And to what end? Observe what? Love mostly.

I had parmesan on mine,
and we kissed over the wineglasses, cabernet sauvignon
a bad year. We hardly tasted it.

Well maybe love lost or remembered. It doesn’t matter. For a wine barely tasted there is a great deal of explication. (It sounds good, it must be good. Poetic gibberish.) Am I to infer that the wine is remembered long after the lover? Or should I consider her lucky in having tasted (barely tasted) only one bad wine in her life? In any case, I recommend romano– more robust. Or consider the “The Days of Plenty”:

Auntie fried my egg to a rubber raft,
the way that I liked it, even after
I didn’t. I still ate it.

Lines so dense with meaning, they balk interpretation. As far as I can tell, food plays an important part in the poet’s life. Much like my child shoes, which fit me before, but, alas, now do not. This child’s point of view is common in her poetry, though never fully engaged. The perspective usually switches over to an adult one within a line or two, causing nothing but confusion. Perhaps it is an interesting side note (from two separate poems) that “–the word, (she) now know(s), is palate,” or how the child realizes “(f)or the first time, the word separate,” but I fail to see their poetic relevance. It might be “signs” and “signifiers,” but hardly poetry.

This topic can be interesting given convincing treatment. For example, Robert Graves’s poem “The Cool Web” does a marvelous job of incorporating poetically the themes Ms. Elizabeth seems interested in, and without muddling up perspective. In any case, I have never understood why adults enjoy writing about their childhood experiences from Junior’s perspective. What insight is there? Continuity? Warmth? How wombful. Or later:

and saw fat in my foot,
a little pale slab of it under the blood
like the rim on a slice of ham.

Ms. Elizabeth’s poetic impulse is in high gear here— so much so that it veers into a cul-de-sac. What’s next? How her skin is actually butcher paper? I could never tell whether I am supposed to find her comparison humorous, childish, profound, or just plain ridiculous. Pudgy feet in poetry, mind you, is always a bad sign. All this is very emotional and does contain some sort of insight I suppose, although I cannot fathom what it might be.

Undoubtedly, Ms. Elizabeth has a problem finding the right tone for her subject matter, and the obverse. (As I stated previously, she pretty much confesses this.) The more complex her imagery becomes, the more her tone falters. Or when her tone is steady, many of her images operate only on the denotative level, as objects. Her poetry seems to lack this required balance, and the reader is dropped–along with any aesthetic concerns–for private confessions which gaily echo in an empty auditorium. Of course, this seems to be the general trend in modern poetry. Poets confess things that no one but they are particularly interested in. I submit, if their confessions are not interesting, at least their language should be. But then again, how can a poet write interestingly about subjects that are uninteresting, or a reader read writing, that cannot be made interesting, by the interested if uninteresting, writer? (I might have drawn blood from my own foot here.)

“Recognition” is, by far, the most abysmal poem of the collection, or should I say the one I least liked? It is a “what if” game taken to outlandish (out of body?) proportions. What would a shaman be if he were an animal, a plant, or a tool? (Bear, mesquite, ax.) And what would a clown be? (A horse, a rose, and a knife.) Furthermore, we are told that all men are divided into these two groups. All of this could have been very interesting if the poet had gone as far as Baudelaire did in his essay, “Caricature in Painting,” which lengthily describes the attributes of philosopher and fool…

Ms. Elizabeth, however, seems only to caricature poetry. The effect of this concerted mess is paltry. The images, the names, and the insights are rather dubious, lacking any worthwhile imagination. Then again, maybe I am mistaken. This Rosetta stone of a poem may be deciphered by me yet. Perhaps these images are the beginning of a new set of Tarot cards. Is this an update of Chuang-tzu’s transformation of things? Is Robert Bly presently sitting on a bearskin by the fire, wielding a knife in his right hand while playing the drum with his left? Or better yet, clowns on the right, shamans on the left. A new Men’s Movement could be at hand. If in the beginning there is the Word, than here we are well before the Big Bang.

I have been harsh in my criticism and, so far, neglected the finer points of the collection. There are decent poems here. In her best poetry, Ms. Elizabeth advantageously uses her sensitivity to objects and language. The superfluous and over-extended images, which spoil much of her poetry, become a method of genuine expression. Those few, finely written poems give not just objects, but how they function in the world she participates in.

“Ode to Knees,” for instance, delightfully exhausts the humor and characteristics of an anatomical part which plays (plies?) such an important role in our movement and bodily gestures. Knees are given some depth; they even carry a detailed imprint of what that naughty first couple (not the Clintons) took with them, after being thrown out of Paradise: “and so they took part of everything with them, grass-juice, leaf-pulp, snake scales, bugs.” (I am reminded, sadly, of Homer’s description of the Trojan War having “unstrung the knees of so many.”) Clearly, Ms. Elizabeth understands knees, and that Yahweh had no choice but to exile us, just to get the bugs out too.

“Seeing the Elephant,” another decent poem, shows the impact of a young girl’s ride on an elephant at “[a] scruffy summer country fair”. Her poetry is quite effective when focused. And her diction matches the tone. Here are the middle two stanzas:

My legs stuck out straight
on the back of the elephant-
skin the leather of work gloves broken in
heart bigger than my whole head.

The large slow lope moved my hips
in a figure eight. The man said,
“You like that, yes?”
I nodded, holding on–I was afraid

Each line rhythmically develops the exhilarating experience. (The slow lope and figure eight are well observed.) The poem maintains a single point of view which preserves past memory and its long-term effect. Only when she is sure of herself, as in “Seeing the Elephant”, “Ode to Knees”, “Elbow Notes”, “Les Fleurs de Mal”, and “Barton Creek, Alone” does her poetry seem remotely delightful. They have the interesting humor–and occasionally startling images–which, perhaps, will be the future strength and trademark of her work.[/private]

Devesh Patel is currently writing a novel and lives in Chicago. ﻿
View all posts by Devesh Patel →
Bookmark the permalink.