When A. R. Ammons died in 2001, he left after him an oeuvre whose size and nature present difficulties both to his readers and his publisher. Norton, it would seem, has decided not to publish a Collected Poems that would span his whole career, preferring to reissue volumes that have gone out of print. Hence the clutch of books here, one of which was first published in 1972. The reason for this, I imagine, is that a single volume (or three volumes, in all likelihood) that gathered all Ammons’s works would simply be too intimidating for most readers and wouldn’t sell. Moreover, one feels that a full Collected would not endear Ammons to a younger generation of readers who did not encounter the collections singly, as readers of the preceding generation did, and find themselves confronted with a vast oeuvre all at once. Even so, it will have to be done at some stage, as Ammons’s reputation shows no sign of decline at the moment.

Ammons’s final book, Glare (1997), presents the main difficulty in extremis. It is a 300-page poem in two parts and it follows the days of Ammons’s retirement in a diaristic way. The material is completely familiar from previous books: Ammons talks about the weather, and his garden; he meditates on death, sex, desire, and the good life. Other people rarely make incursions in his world—he is alone with America. He is by times mordantly humorous and outright grumpy; he is now breathtakingly egotistic and now sweetly modest the next; he is an American patriot and cent-squeezing pensioner; he daydreams outrageously and eirenically; as is often said about him, and as he said about himself, he contains multitudes. As has also been said on many occasions, what makes Ammons interesting is the surprising way he segues from one mood or theme to the next. The reader laughs with amazement at arriving in unexpected places at unexpected times. The baroque boutades of harangue and imagery are deployed with dexterous speed; they give little indication of how one got there, but they do give pleasure.[private]

However, and puzzlingly, Ammons can also bore for long stretches, nowhere more so than in Glare. Allen Ginsberg viewed his own Collected Poems as a series of high points interspersed through many pages where he merely kept his hand in. The problem is that a sub-standard Ginsberg poem will at least relate an interesting story, whereas Ammons only has suburban life; also, there is so much more of Ammons than of Ginsberg. Clearly, the Elizabeth Bishop-model of poetic production is not applicable (a slim volume every ten years or so), but it is a widespread standard of poetry reading and Ammons, to some readers’ minds, cannot stand comparison to the less-productive and more polished poets. But for other readers, and I count myself among them, the boredom is a small price to pay for Ammons at his best. The life of the imagination that he recorded at Ithaca in upstate New York is one of the great poetic testaments of the twentieth century.

The books which his poetry gravitates towards are not then Bishop’s or Richard Wilbur’s, but rather Moby-Dick or Emerson’s journals. These latter also, on occasion, outlast the reader’s attention, but they also amaze with their meditations and mercurial speed. I doubt there are many non-academics who have re-read the whole of Moby-Dick—most likely, they construct their own selection of crucial chapters which they return to again and again. Similarly, with Emerson one wonders where one would be without Joel Porte’s selection from the journals. Ammons also cries out for an imaginative selector; the poet himself clearly despaired of the task, as judged by the guiding principle of a book like The Really Short Poems (1991). Of course, there was a selected poems that was later expanded (1987), but that did not provide a good idea of the freewheeling scope of longer poems, such as Sphere (1974). What is needed is an edition of about 500 pages that will include large swathes of some of the long poems. One principle that suggests itself is to treat the whole oeuvre as a journal and disregard the integrity of the long poems and indeed some of the mid-length poems also. This could be done not to construct a narrative, or thematic sections, but merely to demonstrate what Ammons’s outstanding works and days were like.

Such an idea raises questions about Ammons’s use of poetic form. What, for example, is the integrity of individual poems based upon? Ammons was scathing about traditional form: in Glare he says: “tell me what you think of // a sonnet or some fucking cookie-cutter”. (One response to this outburst might be to ask “how good is a cake that’s made without tins?”) In truth, Ammons was not shy of cookie-cutters himself. After all, he wrote Tape for the Turn of the Year (1965) on a roll of paper from a cash register inserted into his typewriter, and the length of the lines is replicated exactly and anorexically on the printed pages of the book. If that’s not a cookie-cutter, then I don’t know what is.

More generally, his lines and stanzas, whether the protracted lines in tercets in Sphere, or in the short takes of Worldly Hopes (1982) have little integrity. By which I mean that many of the poems could be re-lineated in several ways without affecting their quality; the corollary of this is that “only a person with an eidetic memory could learn one of Ammons’s poems by heart” (Helen Vendler). The point is a serious one. How serious is demonstrated by an exchange in Thumbscrew in 1999. Carol Rumens reviewing a book by Anne Carson suggested that the poetry was very close to prose and by way of demonstration she set one passage as prose (albeit with the line-breaks marked). Carson responded thus in the next issue: “To print verse as prose is an act of contempt that verges on falsification”.

I am not suggesting that Ammons’s poetry should be re-set as diaristic prose, but rather that there is a large difference between re-lineating a poem by, say, George Herbert, and one by Ammons. One of the main pleasures provided by Herbert’s poems comes from the skill with which he fits expression to his intricate verse forms, with their regularly varying line-lengths and rhyme schemes. Herbert’s negotiation of these difficulties is not just bravura performance, but connects with the themes of the poems themselves. So, to lose the lineation would be to lose a lot of what the poems are about and how they express it.

More generally, we invest a great deal in the idea of the line in poetry, especially as it has long been acceptable that poetry does not have to rhyme or scan properly. Carson’s over-reaction suggests an anxiety on this score. For some readers even now, free verse is not poetry. This is wrong-headed, but the free-versifiers also have to inquire about the border between their work and prose. The matter is complex, and I have no intention of resolving it here. Instead I wish to conduct an experiment in the relineation of some lines by Ammons to see what it can tell us about precisely this border in his work.

One of my favorite passages in Sphere goes like this: 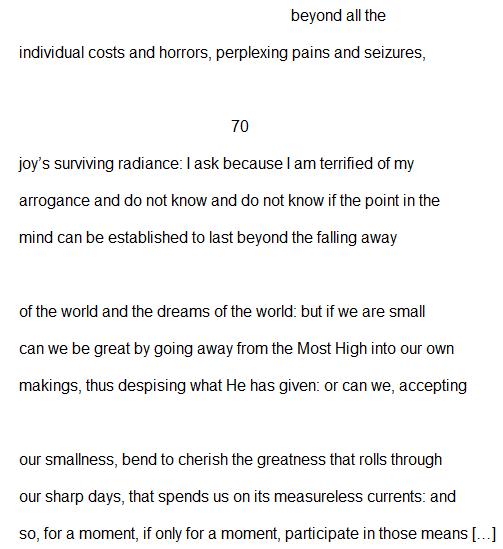 Which I have recast into: 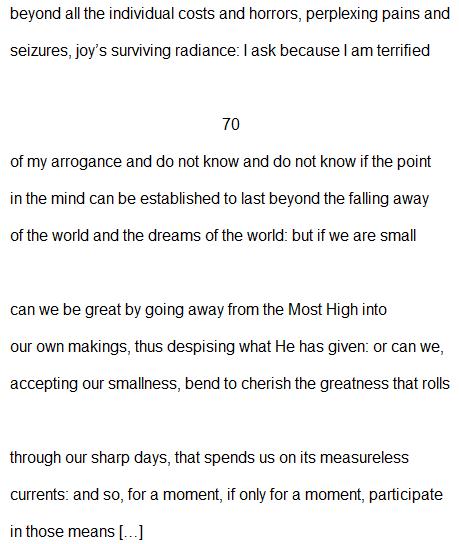 There is the small toll of not having the phrase “joy’s surviving radiance” at the beginning of the new section, but otherwise I cannot see that anything has been lost. This is not falsification and it is not contempt. Apart from lineation, the tercets and section numbers, as far as I can see, have the sole function of breaking up the text on the page so that it is more legible. That Ammons disregards those breaks when beginning a new thought proves the point. Of course, it could also be argued that this disregard reflects the theme of boundary and extravagance that animates Sphere. Perhaps it is a combination of both these factors. However, even the second factor does not invalidate my point: Ammons’s lines and stanzas are disposable cartons.

Having written with such energy and affection about garbage, Ammons might have relished this idea. Possibilities open up: imagine an Ammons selected that re-lineates all the poems like Sphere as one continuous poem, or that breaks them up into short takes; hypertext is a potential medium. Certainly, it seems to me that there is no reason to recoil from such an idea: if it comes to nothing at least there is the possibility that we might reach a clearer idea of what makes the original lineation important, beyond its existence as a kind of manuscript artifact. One thinks of other poets whose work would be amenable to such a method—for instance, John Ashbery and William Carlos Williams.

Where would such a selected leave Ammons in the pantheon? He has rarely pleased the kind of reader who considers Richard Wilbur’s exquisite compression as the height of recent poetic achievement, and the book I imagine would not go any way towards propitiating him or her. Other readers who remain fascinated by various routes that have been taken by the Romantic imagination in the United States are more likely to entertain the idea of such a book. Such readers are interested in the episodes where poetry explores its own boundaries, and occasionally spills over into diary, commentary and meditation.

As it stands, some of Ammons’s attempts are failures, such as Glare, as I remarked above, or all the short poems of Worldly Hopes, and (with two exceptions) A Coast of Trees. Brink Road is perhaps the best collection of the late period, but to my mind Garbage does not surpass the earlier Sphere. Like Emerson, Ammons is more interested in the possibilities that America offers the individual imagination than in the production of a narrowly defined and decorous discourse called “literature” or “poetry”. I want to have both Wilbur and Ammons on my shelf, as examples of two ways that the twentieth century discovered of deftly wielding a cookie-cutter[/private]