Farther South Than This

Jack and Other New Poems by Maxine Kumin. Norton, 2005.

There is a kind of poem that tastemakers and status jockeys tend to ignore: one neither difficult (because highly figurative, allusive, multilayered) nor terse and formal (with every syllable required to justify itself). Such seemingly less self-conscious verse shares many qualities with prose. It is often casual in tone, conversational, even chatty, full of events and descriptions of human quirks and quiddities. It resembles a newspaper column rather than the more academic work of a Richard Wilbur or a Jorie Graham (to take two ends of a completely different spectrum). Though written in lines, it does not sound like poetry: there’s often no discernible meter, and if an occasional rhyme pops up, it’s there for decoration, not structure, and doesn’t distract you from the matter at hand. This is the sort of poem that appears frequently in Maxine Kumin’s Jack and Other New Poems.

It’s as if this old hand at formal verse had contemplated the recent ascendancy of Billy Collins or Mary Oliver and decided theirs was a success (and a technique) worth emulating. A reader of Jack frequently encounters lines like these describing two of Kumin’s highschool classmates who got married : 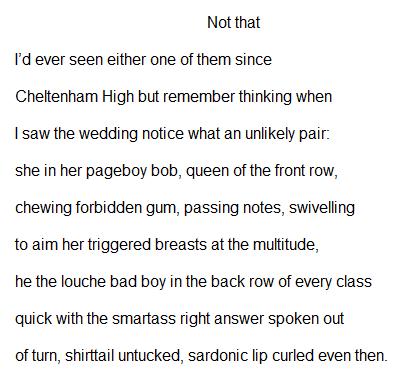 But it’s not quite a walk in the park. The scene quoted is recalled from sixty years ago, evoked by a phone call from the “louche bad boy,” now in an assisted living facility in Castine, Maine. His wife has refused to leave Philadelphia. Kumin recalls their mutual Latin class, where they studied lines from Virgil—after an “excess of love,” Dido mourns Aeneas’ departure and says, “I have lived, I have run to finish the course / that fortune gave me. I go to the dark, go gladly.” And Kumin sums up, “Let him yearn, in Castine, Maine. No mercy on his head.”

The ideas in this poem do not really snap into place. They rattle around and knock against each other. The juxtaposition of the historical and literary archetypes beside the one-time highschool sweethearts is fanciful but not really convincing. Certainly there’s more here than casual reminiscence and gossip, yet it’s not clear how the old classmates should be regarded—are they tragic figures, as the reference implies, or just ordinary people who never understood themselves? Do Virgil’s words really have relevance here or are they merely an association triggered by recollection of the shared Latin class?

Conversational as they may be, poems like this are not quite straightforward, but neither are they exactly beguiling. The reader looking through Jack for something comfortable and inspiring may be brought up short by a plethora of deaths (of animals and people), fornicating insects, sickness of many kinds, people eating babies, horse entrails, puppies sealed in a bag with duct tape, kittens flung from a moving car, impenitent confessions of a rapist, and the mind of a demented man who murdered his children. It is as if Kumin were forcing herself—and the reader—to gaze at the ghastliest details of life in order to ward off any sentimental affection for our lot. Can there be a kitsch of horror? Some readers may not be quite as shocked by the bare statement of these grotesqueries as she wants them to be; they may respond, “Yes, but what do you make of this?”

Take the poem called “Inge, in Rehab,” about a young woman afflicted with bulimia. The first-person narrative starts with an echo (or parody) of Sylvia Plath—“Vomiting’s an art”—and goes on to catalogue other components of the syndrome: cessation of menstruation, an urge to shoplift. Then, having rejected the advice of a social worker (that most abused of professionals), the speaker declares, “I will puke. / I will barf like a dog . . . / who heaves it, then goes / back to the same old carcass.” Some self-knowledge, perhaps still obscure to the speaker, is implied here: some suggestion that the “same old carcass” stands for something both horrible and endlessly fascinating. But the poem really gives us nothing to go on, and we’re left feeling pity, helplessness, and perplexity. Which is pretty much the way most of us start out when our attention is drawn to such an unhappy individual. In short, the poem brings us neither wit nor grace nor illumination, only a hand on the lapel shaking us and saying: “Look—isn’t this awful, isn’t this sad?” Yes, yes it is.

Yet by throttling back just a little, Kumin sometimes achieves a paradoxical increase in power. In a poem called “Historic Blacksburg, Virginia” she focuses on a seemingly minor detail: a reversible lavatory sign in an old railroad caboose, reading “White” on one side and “Colored” on the other. Making effective use of both full rhyme and half rhyme, the poem toys with the irony that both sides of the sign applied to the same mobile privy:

Whoever entered had to flip

his designation right side up

then brace against the track before

unbuttoning back to the door

and pissing down the same foul hole.

The language is colloquial but without extra words. With such economy the poem manages to capture both the absurdity and the vileness of the Jim Crow south.

More often the poems in this book waver between assurance and mere assertion, between insight and coincidence, as if they were notes for other poems yet to be written. In “Summer Meditation” Kumin speaks with notable frankness:

I want to sing

I want to prepare

I want to be

the will, the organ donation,

the power of attorney—

but when my old

I take it back.

She is saying life has too strong a hold on her, even in dream, especially in dream. It is a sentiment nearly everyone can recognize and subscribe to. Whether this poem advances our understanding of our mortal plight or crystalizes it in definitive form—that is the question each reader must ask; but many may feel the language has not attained permanence, the thought has not moved beyond a diary entry to reach some insight that will stay with a reader.

Kumin is at an age when many friends and family, as well as dogs and horses, have gone on ahead into the “undiscovered country,” and both animals and humans reappear in dreams and meditations. Others are even now waiting their turn. She visits by phone with an old friend “as the morphine haze / retreats” and notes, 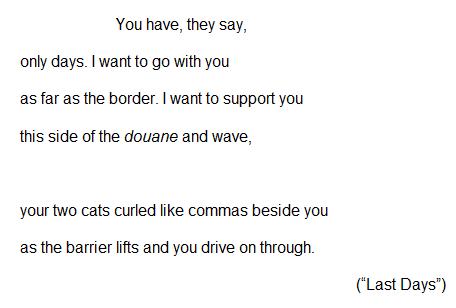 In spite of the rhyme (which is seen rather than heard, because some of the would-be rhyme words are unstressed syllables in the sentence), and in spite of the metaphors, the phrasing of this passage, like that of the poem as a whole, is not chiseled and definitive, but casual. It is like a letter from a humane and sympathetic friend, to be read with a wistful smile, then put away in a drawer.

Whether or not artfully crafted, the poems are imbued with a generosity of spirit that can hardly fail to endear Kumin to her readers. Her title poem, “Jack,” about one of her favorite horses, is written in loping loosely metered tercets that create an atmosphere suitable to the invocation of memory:

How pleasant the yellow butter

melting on white kernels, the meniscus

of red wine that coats the insides of our goblets

where we sit with sturdy friends as old as we are

and setting husks and stalks aside for the horses . . .

She thinks of her two remaining horses and reminisces about their predecessors, especially the “big-nosed roan gelding, calm as a president’s portrait,” whom she “let . . . go / to a neighbor I thought was a friend,” who “sold him down the river.” Did Kumin sell the horse, give him away, or merely pasture him out on loan—she doesn’t say, but somehow she knows herself to be complicit in this loss:

. . . my guilt is ghosting the candles that pale us to skeletons

the ones we must all become in an as yet unspecified order.

did you remember that one good winter?

So human and equine loneliness and mortality are wrapped up in this elegy and made vivid. It is not that the poem itself, as a formal statement, becomes memorable and incisive, but rather that Kumin’s own feelings are so strong and clear that we cannot and would not withhold sympathy.

The value of a book like this is that it forces us—critics and casual readers alike—to ask what we seek in a book of poems. The broadminded, generous, and permissive answer is that different people seek different things at different times, and therefore every style of poetry has its place and its proper audience. But that is unsatisfactory and insufficient. Poetry can achieve much more than Kumin gives us with many poems in this book, and therefore both readers and critics are entitled to object to the weaker pieces, especially because she has demonstrated, and continues to demonstrate, considerably higher powers.

Sometimes these shine through—just often enough to remind readers why they were drawn to her in the first place. In “Key West” she reverts to her casual meter, roughly iambic, the line-length varying unpredictably, the rhymes catching up just when you think they won’t, to describe the seamy underside of the city, as far removed as possible from the high contemplative mode in which Wallace Stevens treated the same place. A mangy performing dog, a wino seeking drink money, inept street musicians, and a woman, “an all-but-brain-dead soul, once beautiful,” offering to sell kittens in a baseball cap. They all seem equally without malice and without hope. But the poem is a low-key indictment of a society in which people, whatever their faults or their desserts, must live like this. And by extension, those of us who allow this scene to exist are complicit:

They get by any way they can,

panhandling up and down Duval.

You can’t go any farther south than this

and still claim you’re an American.

The last lines are not a geographical truism but a statement that Americans have “gone south,” have failed, in allowing such squalor to persist. It’s not a great poem, but it is well constructed, earnest, indignant, and worth a hearing. This is, in a way, an indignant book, exhaling muted fury at the passing of fine things.