Poetry at One Remove: Essays by John Koethe. University of Michigan Press, 2000.

The Constructor by John Koethe. HarperFlamingo, 2000.

John Koethe is one of the small number of prominent American poets who does not make a living by teaching creative writing. A philosopher by profession, he has written a book on Ludwig Wittgenstein. However, his output as a poet has been more substantial: The Constructor is his fifth collection of poems since 1968, and his book of essays, Poetry at One Remove, is first and foremost for those whose primary interest is poetry not philosophy. He is preoccupied most of all, both in his poetry and his critical prose, with the American romantic tradition of Stevens, Ashbery, and, hovering behind them unmentioned, Emerson. His work explores the implications of this poetry for the relations between the self and the world. He is suspicious of ethnic and social demands upon poets, considering that such engagements “can be an evasion of one’s basic practical identity as a member of the party of humanity”. Poetry, emptied of such matters, is for Koethe “an enactment of pure subjectivity”, an unwavering attention to the actions of “self-reflective consciousness”. He inveighs against “an overly narrow view of [poetry’s] range and possibilities, one that insists on the concrete and particular and proscribes the abstract and discursive”.[private]

What this leaves us with is then hard to say, but this very question becomes an animating force in the poetry, one that is woven into a somewhat etiolated autobiography, and by times contested and asserted. Thus the latter: 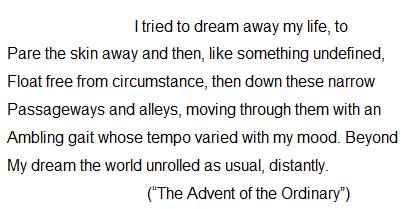 And then the former:

Even as he longs, as in the first passage, for some realm away from mundane life, he registers its faint hum in the distance, and such a tension is articulated in his prose: “Romanticism, as I have tried to understand it, is similarly torn between a vision of subjectivity as completely other than the world and a vision of subjectivity as invested with and constituted by subjectivity”. That is, the world unrolled without being informed by his own subjectivity. This tension rarely finds dramatic form in Koethe’s poetry but rather is expressed by statements of various realisations that occurred to the subject in the past.

This subject does not do much in the line of physical action (the most strenuous operation is sipping coffee), but rather thinks, remembers, recalls, resolves, feels, and “sees now”–all, one supposes, while sitting quite still in a well-appointed house. One exception to this is “Threnody for Two Voices” in which the speaker of the poems is directly challenged by his wife for his endless havering:

Your maddening inability to see; your breathless concentration
And these rambling explanations filled with a grandiose
Self-pity and a sadness on the scale of the universe.
What’s missing is the dailiness, the commonplace
Engagements that could make this formal universe a home.

Well, yes, but the wife here does not really move beyond Koethe’s own parameters when criticising the speaker. For if anything is missing from this volume of poems it is not “dailiness”–the tone of The Constructor is suffused by the ennui of the everyday, of the bland eventless afternoons of middle-class existence. What is missing is a conception of the poetry that is beyond the narrow tradition of American romanticism.

By this I mean that in Koethe’s conception, the fundamental opposition is between the individual self and world–sometimes there is détente, sometimes not. The world is conceived of as the realm of the social which threatens the creating self. Discussing the role of poets as teachers of creative writing, he becomes dogmatic on the point:

It is essential that the relation between the poet and his work be an internal one between a freely adopted authorial self and a poetry that enacts that self’s subjective consciousness–for only in that that way can conformity to the obligations that relation engenders manifest the sense of freedom that lies at the heart of the romantic imagination of the self. But if one’s poetic identity is in part a matter of an institutional role one occupies, there is always a danger that one will come to see it as externally imposed–in which case the relation between the authorial self and the work that flows from it will be altered. The work will no longer seem to be created in conformity to a self-imposed obligation but in conformity to a duty imposed from the outside. (“Poetry at One Remove”)

This Emersonian opposition between the creating self and the entanglements of society glosses over the ways in which Koethe’s “self-reflective consciousness” itself is formed by one particular historico-cultural tradition. The tone here suggests that “conformity to a duty imposed from the outside” will somehow contaminate the poetry of “the romantic imagination of self”, but refuses to entertain the idea that the contamination might have been there from the start. After all, selves are in part created by particular parents, particular educational institutions, and so forth. Koethe qualifies this position later in the same essay (“The problem is that there is really no such thing as a self that is simply a locus of pure subjectivity simpliciter; yet there is a poetry that is animated [by] the idea of this kind of self”), but essentially it informs the whole book. Koethe’s critical frame cannot account for poetry that acknowledges and then actively rejects the poetry of “self-reflective consciousness” in order to conform to the demands of history. And here I do not mean the type of poetry that falls under the rubric of multiculturalism, but rather of, for instance, Geoffrey Hill.

The poetry snags against nothing but the speaker’s own small realisations: he leaves the mundane world or he returns to it, happy or sad, and that is more or less the extent of the subject matter. In itself that would be more than enough to occupy a poet of rich rhetorical talents, but these Koethe signally lacks. For the most part he employs a seven-stress line that drifts into prose: insert a few simpliciters and semi-colons and The Constructor could be smoothly cut-&-pasted into Poetry at One Remove (though I should note that there might be a problem due to the slapdash copy-editing the book of essays received). The names of Ashbery and Stevens, so often mentioned in the pages of Poetry at One Remove, mark the height to which Koethe comes nowhere near.[/private]