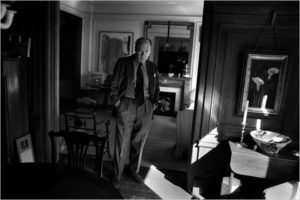 Glamour-fueled magazines, like New York, do not characteristically devote much ink to poets. Poets tend to be too shabby, don’t own much “stuff,” and typically don’t have much of interest to impart. It is usually the case that a poet must come with a twist, so to speak-some sensational hook, to warrant appearance in the glossy newsstand ranks. Frederick Seidel, a poet revered and perhaps loathed in equal measure, was given lavish treatment in a recent New York article titled, inappropriately, “The Motorcycle Diarist.” The largely misleading title refers not to the revolutionary leanings of a young Ernesto Guevara but to one of Seidel’s chief subjects, his beloved hand-built Italian Ducati motorcycles. The article makes much of Seidel’s luxurious life, what is assumed to be his great wealth, sartorial finery, and globetrotter status. Seidel’s intimate friends include designer Diane Von Furstenberg and Italian film director Bernardo Bertolucci. The poetry, almost an afterthought, is assumed to surge spontaneously from the life.

Seidel is therefore a triumphant outsider in American poetry. He does not give readings (he “loathes” them), though one may hear excellent recordings of poems from his new book Ooga-Booga at www.frederickseidel.com. Writing in the New York Sun, Adam Kirsch suggested that Seidel “may be” the best American poet writing today; though hedged, this is a strong bet. Seidel’s most successful techniques, according to Kirsch, are “mystification and outrage.” Kirsch earlier wrote in a 2003New Republic review that Seidel is “transgressive, not in the fashionable way of the seminar but in the disturbing way of the nightmare.” Writing in the Boston Review, Calvin Bedient, editor of avant-garde magazine Volt, depicted Seidel as “the most frightening American poet ever,” and Philip Connors wrote in the young magazinen+1 that Seidel is “willing to say the unsayable.” Richard Poirier, critic and editor ofRaritan, remarked in the late 1990s that Seidel’s poetry contains “complications of a sort that I don’t feel are exhibited in any other of the contemporary poets.” Seidel’s own editor at Farrar, Straus & Giroux, Jonathan Galassi, admits that the poetry is “uncompromising to the point of cruelty.”

Those assessments conjure the image of a monstrous, manipulative poet concerned primarily with contravention of polite standards. One is advised to hearken back to Lord Byron or even e.e. cummings to find such a creature. Seidel’s poetry is more complex and authoritative than the old-hat academic term “transgressive” might imply. Consider these lines from “Kill Poem,” the opening poem of Oooga-Booga:

A beast whose nature is to run and stink.

I am civilized in my pink but

Civilized is about having stuff.

The poem ambiguously praises but only vaguely laments the trappings, achievements, and cruelties of a “civilized” man behaving in a “civilized” manner, riding his motorcycles as if riding down a fox, hunting and consuming his quarry. The poem constantly swerves down nightmarish paths:

John F. Kennedy is mounted weeping on the wall.

His weeping brother Robert weeps nearby.

One should not be fooled into supposing that such lines teem with imperial sentiment; the poem concludes: “The American trophies covered in tears that deck the American halls.” He seems to imply that violence is endemic not only to civilized life but particularly to the American strain of it. He does not, however, summon any alternative utopias. The Iraq War vexes the poems and bursts forth in peculiar, associative lines such as “Winter, spring, Baghdad, fall” and “the huntsman’s heraldic horn sounded the hallali. / The tune that cuts off the head. L’hallali!” Although Seidel may seem at first to hail from another era altogether-he interviewed Robert Lowell for the Paris Review in 1961-Robyn Creswell calls his poetry “uniquely contemporary.” As new and awful as it may seem, something like “Kill Poem” may be easily traced to notable ancestors, such as English poet Keith Douglas’s classic poem “Aristocrats,” which buoys the brutal weight of war on a cushion of irony:

I saw him crawling on the sand, he said
It’s most unfair, they’ve shot my foot off.

How can I live among this gentle
obsolescent breed of heroes, and not weep?
Unicorns, almost,
for they are fading into two legends
in which their stupidity and chivalry
are celebrated.

The cool, menacing irony allows Douglas to throw the ancient privilege of aristocrats into harsh relief against the shocks of modern, mechanized warfare (one of Douglas’s poems is titled “How to Kill”). The closing lines of Douglas’s poem, particularly if recast in the first person, could be slotted into Seidel’s without seeming terribly out of place, as “They dispose themselves, / I think with their famous unconcern. / It is not gunfire I hear, but a hunting horn.”

Douglas’s poem was inspired by a European war in North Africa (Douglas served with Montgomery’s 8th Army against Rommel’s Afrika Korps at the Second Battle of El Alamein) just as Seidel’s is clearly distressed by the American war in Iraq. Lament for a passing aristocratic way of life is prevalent in both poems, though Seidel examines the ruin and absurdity of the terms of aristocracy in a modern America that prides itself on merit and classlessness (to be clear, he is not actually an aristocrat in the European sense; he was born in St. Louis, the son of a Jewish mine-owner). It is not unusual for Midwestern Americans of literary persuasions to cultivate a patina of aristocratic bearing. T. S. Eliot, also born in St. Louis, described himself as “royalist in politics” in the preface of For Lancelot Andrewes. Although Robert Frost, the hard-bitten poet of New England winters, might seem an odd forerunner, he too can be sited in Seidel’s poetic family tree. Passages from Frost’s recently published notebooks (Notebooks of Robert Frost, Belknap Press) correspond almost precisely in both language and attitude with Seidel’s poetry. Frost writes, “Civilization is the opposite of Utopia” and “I hate the poor don’t you Yes and I hate the rich.” Perhaps the best maneuver for the privileged poet in America is to come right out with it rather than dissembling. Seidel insists, “Everything in the poems is true. You should take them at face value,” while also defensively declaring: “The man behind the poems just wants his privacy.”

In Seidel’s poetry, privilege and wealth do not effectively insulate the speaker from third-world genocide, terrorism, and starvation; quite the opposite-those horrors are amplified. One could read many thriving American poets and not know that there is a world outside the daily suburban routine of the poet, much less one in which war and deprivation define the lives of whole populations. In this respect, Seidel, as glib as he might seem in any given line, is more engaged with the state of the world than most American poets. Further, the excesses outlined in the poems cannot truly be considered remarkable in a nation where obesity is epidemic and pornography a multi-billion dollar industry.

Like that of Robinson Jeffers, another American poet with a private income, Seidel’s poetry shows signs of being a bit antisocial. Just as Jeffers wrote icy verse from the battlements of his granite Hawk Tower in Carmel, Seidel casts down provocative bolts from his home on Manhattan’s elite upper west side. Seidel loosely echoes lines from Ezra Pound (“what thou lovest well remains”) and Robert Lowell (“the spiders marching through the rain”), and ersatz native geographies from Walt Whitman (“Manahatta”) and Henry Wadsworth Longfellow (“Gitche Gumee”). He has a Whitman-like proclivity for self-contradiction and the blending of lofty and common diction in a single stanza. He replicates nearly whole poems in variation, as a baroque composer might retool a sonata. Identical lines materialize throughout the collection. What seems at first a daring, if not dangerous, egotism threatens, at times, to dissolve in a vapor of private facts, ominous lullabies, and a maddening welter of associative psychological prattle. Lines of unpredictable length are held together with rhymes that enter and disappear with unnerving irregularity; chauvinist escapades liquefy into cries of helplessness.

On the positive side of the ledger, he takes risks utterly unthinkable, even as merely mutinous provocation, in an academic workshop. The effect is gratifying but somehow out of proportion. Why is this man so obsessed with visions of violent death? Why the bloody tirades interpolated by evenings at the Hotel Carlyle? The resulting poetry is by turns as exciting and exquisitely crafted as one of Seidel’s beloved Ducati Superbikes and as vulgar and crass as the accompanying impulse to boast incessantly of owning one. He scores victories, such as the rambunctious first stanza of “Drinking in the Daytime”:

Anything is better than this

Nursing on a long-stemmed bubble made of crystal.

I’m sucking on the barrel of a crystal pistol

To get a bullet to my brain.

I’m gobbling a breast, drinking myself down the drain.

At other times, he suffers clear defeats, and his internal rhymes begin to sound clotted and finally cloying-again, what Frost referred to as “death by jingle”: “I use myself up being fine while I dine.” He seems to owe as much to the flamboyant spontaneity of Frank O’Hara as to the sinister cadences of Dr. Seuss. Still, his coarseness is regal, more convincing than August Kleinzahler’s, less polished than Henri Cole’s.

Although I will not say, “I, too, dislike it,” I will confess to a slight sensation of nausea and disorientation, perhaps intoxication, when reading Seidel’s poetry. Alex Halberstadt, who met with Seidel for the New York magazine piece, wrote: “While I can think of a more likable book of poems, I can scarcely imagine a better one.” Seidel seems to anticipate this when he writes “I sense your disdain, darling. / I share it.” He is clearly not interested in behaving politely on the page, or being liked-“Get rid of poetry. Kill poetry,” he taunts-and his readers, which Halberstadt likens to a “cult,” would probably not want it otherwise.

In serious art, particularly serious literary art, there is no great value attached to likeability. In the case of a poet like Billy Collins, it lends itself to commercial success. His readers like him. This is not always the case. At the height of the James Frey debacle, as his fledgling career detonated into a million little pieces, I asked a woman who spoke excitedly about Frey’s childish, fraudulent memoir what exactly she liked about it. She returned a puzzled look and said, “Oh, I don’t think it’s a book anyone could like.” It is hard not to be impressed by a man who manages to sell over three and a half million copies of a book no one likes, but it also shows that being disliked is no impediment to gaining a position on the best-seller lists. Whether Seidel’s hostile style (he teases, “I find the poetry I write incomprehensible”) will suffice when it comes to his longer legacy-that is another question. Just now, he may arouse hostility and admiration among readers and cognoscenti, but the poems must stand on their own, even if before a firing squad. Seidel is not unduly concerned with posterity. Astride his Ducati, clothed in bespoke suits, settled in a surfeit of luxury, the poet can write, with barbed tongue in cheek: “I spend most of my time not dying. / That’s what living is for” while also forecasting: “Have pity on me a thousand years from now when we meet. / Open the mummy case of this text respectfully. / You find no one inside.”[/private]