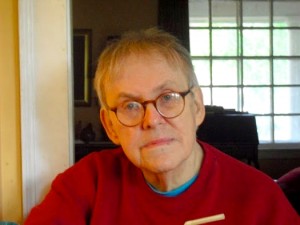 I didn’t know, when the Contemporary Poetry Review published my essay review on Daryl Hine this January, that the poet was in ill health, and certainly couldn’t guess that he would die within a year of that piece appearing. At the time I was cheered by the fact that he had found a new publisher in his native Canada, Fitzhenry and Whiteside (which had released a selected, Recollected Poems,  and brought out a new, book-length poem, &: A Serial Poem). If the latter wasn’t particularly to my liking, I was looking forward to future books, and was grateful for the chance to introduce new readers to the work of this perennially underrated poet.

And now he’s gone, having passed away on August 20th in Evanston, Illinois, where he had lived for decades. I had no personal acquaintance with Hine, but the loss feels personal. For one thing I’ve read and reread his two memoirs in verse over the years and feel I knew him a bit, or knew him as well as he wanted his readers to. For another, I suspect that my own habits as a reader and writer owe something to my exposure to Hine’s work. I discovered Hine just as I was beginning to write poetry seriously (a different thing, obviously, from writing serious poetry), and he was one of the people I read most obsessively.

There was something both addictive and addicted about Hine’s poetry, something at once daring and desperate in his refusal to back away from the very considerable technical challenges he set himself.  I may not have found & successful on the whole, but bits of it are marvelous, and one of my favorites concerns the habit forming aspect of the creative process:

I smoke my cigarettes in segments as
I waste my life, one installment at a time,
As if smoking had become a reprehensible crime,
As in fact it practically has ,
Along with drinking & kinky sex & all that jazz,
Not to mention the obsolete intervals of rhyme.
Yet a day seldom passes without invoking
The god of tobacco and his dazzling razzmatazz
With its verbal paraphernalia. Apparently I’m
Addicted to this serial poem as to serial smoking.

Addicts are notoriously not the best judges of their own actions, and Hine could be blind, in the majority of &, and in a number of his lyric poems, to his own excesses. I dwelt on this at greater length in my earlier piece on his work, and I don’t want to do so here, especially not now. That same craving for linguistic and prosodic thrills also informed his best work, including “Epistle to Theocritus,” a verse letter in dactylic hexameter appended to Theocritus: Idylls and Epigrams, one of his masterful volumes of translations.

Truly aesthetic
Freedom consists in a struggle against the creative constraints that
Artists impose on themselves. It is obvious surely that games
Really no fun without rules, whether tennis or flower arrangement.
Rules are implicit in everything, even in aleatory
Music. Submission to chance is a basic condition of order.
Glibly we speak of the sinister forces that shape our existence
When, were it not for their influence, most of our lives would be shapeless.

The allusion to Frost’s famous line about writing free verse being like playing tennis with the net down is obvious enough. But Frost also said, “There are only two meters in English, strict iambic and loose iambic,” a ruling to which the above passage itself is a rebuttal.  Nor did Hine limit himself to reviving classical meters. He invented his own. The two memoirs I mentioned earlier, Academic Festival Overtures and In and Out, were long poems in, respectively, syllabic alexandrines (rhymed abcb), and running anapestic trimester. I don’t think anyone had written an English poem in either meter prior to Hine, and certainly no one had used either for a book-length work. (Nor has anyone done so since, to the best of my knowledge, though James Merrill did borrow In and Out’s meter for the fourth section of his poem “Bronze.”)

For a young poet writing in meter, this was exciting stuff, something like a budding guitarist learning there’s more than one way to tune his instrument, or that there are notes between the ones recognized by western music. The most obvious thing that poets can take from Hine, aside from the specific meters he developed and revived, is a willingness to renew and expand the metrical tradition. Dana Gioia was on the money when he said a few years back that the New Formalists might more accurately be called the New Iambicists.

When the editors at CPR asked for a few words on Hine’s passing they suggested, among other things, that I might speculate about Hine’s place in the canon. Every indication is that Hine’s readership during his lifetime was relatively small, but that in itself may not be an obstacle, given how little popular readership has to do with canon building these days, at least as far as poetry is concerned. I have no doubt myself that Hine deserves to be remembered and read. Others, influential others, agree: as Jason Guriel pointed out in a review of Recollected Poems a few years ago, Hine is one of only eight Canadians on Harold Bloom’s list of essential authors. The most important thing now will be to move beyond the relatively general appreciations of Hine’s work, my own included, that have so far appeared.

And I do cherish a hope, however faint, that Hine’s readership will grow with time. The most obvious step toward this would be to reissue Academic Festival Overtures and In and Out.  Versification aside, these are immensely engaging narratives about coming of age (and coming out, to the extent that the times permitted),  and given the current vogue for memoirs, I think they have the potential to interest some who typically steer clear of poetry. From early on, Hine’s reputation was that of a poet’s poet (a reputation reinforced, I realize, by somewhat geeky technique-besotted appreciations like the present one). It would be a nice irony — and one the poet, from his new perspective in Elysium, would no doubt enjoy — if his work were to win back to poetry some of its common readership.

Bill Coyle's poems have appeared widely in magazines and anthologies, including the Hudson Review, The New Criterion, the New Republic, and Poetry. He is a translator from the Swedish, and his versions of the poet Håkan Sandell have appeared in PN Review and Ars Interpres and are forthcoming in the anthology The Other Side of Landscape. Mr. Coyle teaches in the English Department at Salem State College in Salem, Massachusetts. He lives in Somerville, Massachusetts.
View all posts by Bill Coyle →
Bookmark the permalink.