As Reviewed By: Ben Downing 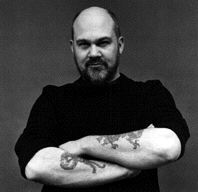 It was his sonnet “A Bookmark” that first caught my attention. “Four years ago I started reading Proust,” the poem begins, and goes on to skewer Remembrance of Things Past and its mincing narrator-“Oh, what a slimy sort he must have been- / So weak, so sweetly poisonous, so fey!”-with seemingly effortless panache. Like any sensible person, I love and revere Proust, but this Disch had a point: there are Bataan-like longueurs in the novels, and the narrator really is insufferable at moments. I made a mental note of his name. Then, a few months later, I came across “At the Grave of Amy Clampitt,” with its air of somber homage-an air mischievously vitiated, however, by the fact that Clampitt was still alive at the time. Who in the world, I began to wonder, was Tom Disch, with his wicked pre-emptive elegies and deflationary sonnets?

[private]A few years later I got the chance to find out. I began working at the journal Parnassus, to which he often contributed reviews and essays that had all the wit, polish, and irreverence of his poems, and he seemed to find my editing-always light in his case, since he turned in such clean copy-congenial. An invitation to lunch followed. I’d pictured a stereotypical New York literatus, slight, bespectacled, and tweedy, but the guy who opened the door bore more resemblance to an ex-jarhead from Texas or the Deep South; with his massive build, thick tattooed forearms, beard, glinting sardonic smile, and dirty T-shirt, he looked like he’d just come from chasing away trespassers with his shotgun. (As I learned, he actually hailed from Minnesota.) Though slightly bewildered, I managed to make myself at home, and soon found myself mesmerized by a charisma as gargantuan as the frame that projected it. What a voice! Deep and resonant, as one would expect from a man of his size, it also had an enchantingly silken quality and a light, jesting mock-plumminess; it was like listening to the love child of Falstaff and Orson Welles. And no less hypnotic was the content of the flawless long sentences the man so casually unspooled. I have a bottomless appetite for political incorrectness, and here was a master of it. One after another the sacred cows were lined up and, with the deftest of pushes, tipped. He was completely and splendidly outrageous.

We got together a few times after that before losing touch. Then, about two and a half years ago, he called me out of the blue, clearly drunk (which came as a surprise, since he’d long been on the wagon). Charlie, his partner of thirty years, had recently died-slowly and horribly, of colon cancer. He asked me to stop by. When I did so, I learned that, along with his bereavement, he’d endured a hellish series of real estate disasters, with eviction looming. His arthritis and sciatica seemed worse than ever-even using a cane, he now walked with difficulty-and he’d developed diabetes. All these misfortunes made, of course, for a bleaker outlook, and he repeatedly wept. But then suddenly the clouds would part, and his satiric joie de vivre would reassert itself, and he’d break me up laughing; he had an almost tender regard for human folly, his own included, that I found endlessly funny. When I looked at my watch, it was 4 a.m.-I’d stayed for nine hours.

Thereafter I went to see him almost every week, sometimes bringing a friend or two. (David Yezzi, whose contribution follows, often joined me.) Sitting in dilapidated chairs that always threatened to collapse, and with Tom usually wearing, for comfort, a preposterous, shapeless garment like a muumuu or dashiki, we’d knock back plonk from one of those supersize wine boxes-Château Merde, we dubbed it-and carry on for hour after hour. Sometimes I was content simply to listen, to drink in, with my awful wine, his rare and exquisitely modulated cadences, used to such devastating comic effect; there were certain stories I could never get enough of, such as the one about how his supposed friend Philip K. Dick denounced him to the FBI (Tom saw the file). Yet when I did choose to talk, I found him not only the most attentive but non-judgmental of listeners. No subject was off limits; it was impossible to put his back up; and to be able to hold boozily forth in my worst manner-bitchy, snobbish, pedantic, vulgar- without fear of giving offense produced a wonderful feeling of tolerance and freedom.

While we spent much of our time bantering, bullshitting, and being wonkishly literary, there were always serious interludes when we’d talk frankly about whatever pained or demoralized us. Tom had far more to lament than I, and not infrequently he’d speak of suicide. This was never in the nature of a threat or attention-getting ploy; he was very matter-of-fact about it, calmly vowing to off himself if things got too rough, and especially if he were evicted. Over time, though, he seemed to slowly improve, his spirits lifting somewhat as he came to terms with Charlie’s death; the specter of suicide, while never entirely vanishing, seemed to have receded, and I didn’t worry much about it anymore. Then, last month, he abruptly stopped answering his phone. Since he almost never went out, he’d always been easy to reach, and after a few days of incessant calling I became concerned. On July 5, using the spare set of keys he’d asked me to keep for him, I let myself into his apartment and found him lying in bed, a .22 rifle by his side and a pool of blood on the mattress under his head.

In the days that followed, his friends shared, along with their shock and grief, a sense of bafflement-“Why now?” we all asked. There’d been no order of eviction, no final insult to push him over the edge, or at least none we knew of. His timing remains a mystery. When it was concluded that he’d shot himself on the Fourth of July, I couldn’t help speculating on the possible symbolism. A middle finger raised to brainless American patriotism? A last assertion, from this proudest and most stubbornly autonomous of men, of his own independence? We’ll never know.

In his poem “The Art of Dying” (another of those that made me cherish him before I ever knew him), Tom assigns hilariously improbable deaths to a raft of poets: “The execution of Marianne Moore,” “Pope disappearing like a barge into a twilight of drugs,” and so on. That his own style of departure was so perfectly in keeping with his life gives me some comfort-many things slipped out of his control during his difficult final years, but not this one.

In his writing, as in his person, Tom was larger than life. As has often been remarked, he really was something of a genius, in the true typological sense: one of those pure, prolific, self-realizing talents who come out of nowhere. The author of dozens of works in every conceivable genre-horror, historical fiction, plays, libretti, criticism, children’s books, and above all science fiction-he enjoyed a confidence and protean facility that were almost Michelangesque. Just so, he belonged to that minute company of estimable writers who could bang out poems as fine as their prose; Thomas Hardy and Kingsley Amis are the only others who come to mind (in my view, D.H. Lawrence bombed at both). It is mostly Tom’s poetry that this issue of Contemporary Poetry Review commemorates, but I would have you keep in mind, as you read the following appreciations, that he was a bona fide man of letters, his verse fed not just by the pinched stream of contemporary poetry but innumerable broad tributaries of culture, knowledge, and literary technique. Even more, I would have you know that behind the poems is one of the great characters who ever lived. It is, of course, impossible to conjure up, to more than indicate the force, uniqueness, and magnetic quality of Tom in person. But perhaps if you take my word for these you’ll find them glimmering through on the page.

With some hesitation, I’d like to conclude by appending a poem of my own. For a few days last year, Tom’s blogsite went down. It seemed a minor nuisance, but he’d become emotionally dependent on the site, and its crash provoked a crack-up in Tom himself-it was one of the few times I feared he might be at imminent risk of suicide. Afterwards, struck by the randomness and relative triviality of the triggering incident, I wrote a poem about it. Though I used only Tom’s first initial and altered several details, I fretted for months before deciding to publish it in a magazine I didn’t think he followed; while I could imagine him being pleased or touched by the poem, I could also picture him being, for once, furious with me-he hated anything in the way of pity. Now that he’s gone, I feel more comfortable putting the poem forward, not as anything special in itself but as a testament to the deep affection his friends feel for him, and to their distress at seeing such a kindly giant felled by successive unearned blows of fate. If he’s reading this from beyond the grave-I wouldn’t put it past him: in his last book he facetiously proclaimed himself God, and he did uncannily resemble our conventional image of Him-I hope he’ll forgive me. At any rate, I raise a glass of Château Merde in his everlasting honor.

The kind that break the camel’s back,

the kind at which we clutch:

they can be one and the same.

Item: my poor friend T., in such

a panic over the one he’d grabbed

attempting to escape his grief:

his own blogsite, of all things,

providing outlet for his rage

and some solution to his loneliness,

but then, as straws do, snapped,

or rather briefly crashed; and this

it was that put him round the bend.

Recently widowed, a martyr to gout,

his house consumed by mold,

he’d every reason to want out,

yet had hung tough despite it all-

until, that is, his cyberloss

(so slight, so soon repaired)

sent him thirstily back to the sauce

and made of him a broken reed:

He didn’t say as much, but I suspect

what had him reaching for the rope

in some small part was that hopeless sense

of vulnerability to everything,

of himself as weakened to the point

where any bit of chaff could bring

his whole life toppling down-

humiliating to be crushed by straw.

No wonder of it, though:

to modify another old saw,

when one can no longer make hay,

the sun having ceased to shine,

one grasps at random stalks,

and these can break the strongest spine.

Ben Downing is a poet and the Managing Editor of Parnassus: Poetry in Review. He is writing a biography of the Anglo-Florentine society figure Janet Ross.
View all posts by Ben Downing →
Bookmark the permalink.