As Reviewed By: Jan Schreiber

A hardy strain of poets in America feels that the craft of poetry is often too crafty, that the verse line need be nothing more than a space in which to say something striking, and that elevated diction will cut the poet off from his readers, who are in fact his peers. Spurning many traditional resources of poetry, these writers rely on their ingenuity in selecting the right details, and the right words, to convey strong sensuous impressions and a sense of dis­covery while holding artifice to a minimum. Much if not all of the time, W.S. Di Piero is such a writer, and the result is a poetry like this: 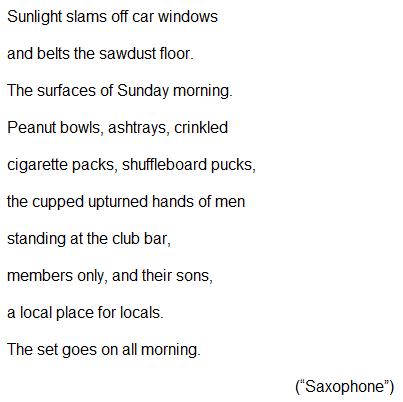 There’s no meter here, but there is rhythm—three or four accents to a line. The verbs are masculine and muscular, but not without nuance. The sunlight that “belts” the sawdust floor doesn’t just punch it, but forms strips of brightness among the detritus. And this poem is about music, after all, so we understand that the sun “belts” light as a saxophone belts out a tune.[private]

Direct and unpretentious the poem may be, but it is far from artless. It is one of many in which Di Piero recalls his childhood, in this case to locate the forces that made him the man he became. As a child too small to reach the keys on the instrument, he puzzled at the music inside and the man who could release it,

toward some misted life not yet my own

where I’ll become the music I have been.

Readers may note that not only does the conflation of time allow the poet to retrospectively anticipate his career in this early experience, but by dropping unobtrusively into blank verse in the last five lines he adds rhetorical power to the conclusion.

Many of Di Piero’s poems are, like these, set in his native Philadelphia. Many others are inspired by works of art, frequently paintings by old Italian masters like Carpaccio, Caravaggio, Lippi, and Masaccio. One poem, however, pays tribute to Cézanne, a modernist, and in doing so describes a method that seems remarkably close to Di Piero’s own: 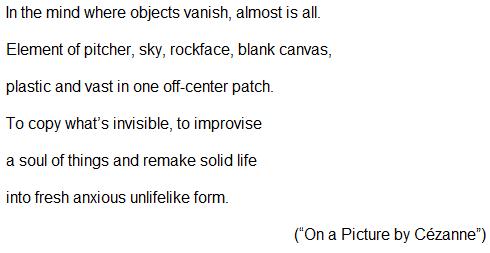 Something like this seems to be Di Piero’s aim and intention. But he is working with words, not graphic images. How does he attempt these effects in language? And does he succeed?

The first task is to make language memorable. To demonstrate a quite different approach for comparative purposes, let me quote a passage from Richard Wilbur: 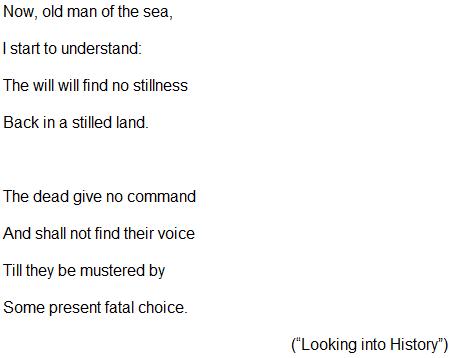 The verbs are quiet and ordinary: understand, find (repeated a second time), give, muster. They can afford to be quiet because the rhyme and regular meter give their own force to the passage, make the poem command attention and stick in the mind. Contrast this with a descriptive passage in Di Piero’s “The Incineration: Kansas”:

juncos belly up and heave toward us

and vanish in the light behind and

switching back, reel and are embodied

once again, as if the Grace who returns

her gifts could not be caught or guessed.

Here we have, among others, the verbs flourish, belly up, heave, vanish, reel. The scene is admittedly more active, but even a still tableau, like the one depicted in the first quotation of this review, employs ferocious verbs like slam and belt. These are the devices that give energy to the poems and make them—or at least an impression of them—stick in the mind.

Interestingly, when Di Piero brings the resources of rhyme into a poem, he is able to employ quieter language and still achieve some of the striking effects we see in the flashier, less formal poems: 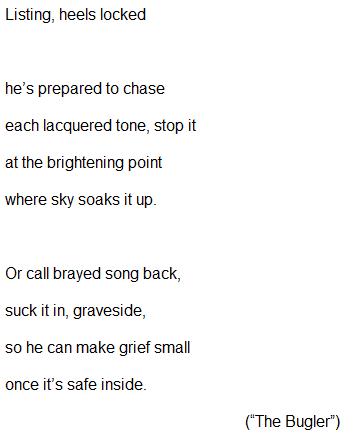 Here the progression of sound (brayed song, graveside, grief small, inside) gives a formality to the statement and makes it noticeable even as the language, perhaps in imitation of the subject, pulls back.

At other times Di Piero’s attempts to “improvise / a soul of things” seem more freewheeling. Here, for example, is the first of “Five Studies.”

The oleanders claw the screen.

on white shades beside the bed.

Somewhere, out there, Venus sets.

In here, the dim corner lampshade

showers its cone of phosphors,

prickling our arms and legs,

the next occasion, for tedium

You’re dissolving into your white ground.

The oleanders grab the sheets.

Here perception transforms itself into actuality, as when Wallace Stevens writes of a pineapple, “Out of his bottle the green genie comes.” Without the oleanders the scene would be mere tedium; with them, it achieves the tepid interest of the opening scene in a horror movie.

The rest of these studies persist in their efforts to transform the mundane into poetry. The fifth one begins:

I woke in January (the grass already thicker,

nodding in the low light)—I woke

to frost hazing all that green, the not-white,

What is a “hurt green,” and why are camphor trees “brainy”? If we think we have answers to those questions, or even if we don’t, we go on and see that the rest of the passage describes—in terms of negative qualities (not-white, not-silver)—hoarfrost on common objects on a winter morning. These lines bring no surprises, no revelations. The reader must decide whether the insight conveyed is worth the time and space consumed.

If not all the poems succeed unequivocally, we should not be surprised. It is not easy to “copy what’s invisible” or “improvise a soul of things”; by his very productivity (these selected poems amount to nearly 250 pages, and Di Piero is just past 60), the author stacks the deck against himself, for inspiration is inconstant and unpredictable. At his best he brings a bracing ingenuity to his poems, inviting admiration, but not all his output achieves the highest altitudes.

Many of the poems, particularly in the section from The Restorers, deal with religious questions. Often they are based on, perhaps inspired by, classical paintings, as if the painters’ sensibilities, devout and skeptical at once, humble and blasphemous, had infused Di Piero’s spirit. Here he is describing details from the frescoes of Filippino Lippi in Florence’s Strozzi Chapel:

This is inspired commentary, but it seems to demand to be read beside the fresco, so we can refer to it. For a more meditative and analytic spiritual quest, in Di Piero’s own voice, we might turn to a poem like “Gethsemane,” which attempts to penetrate the psyche of Judas nerving himself up to the moment of betrayal: 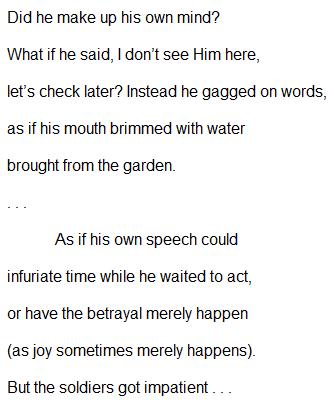 This is not as bold a penetration as Hamlet’s soliloquies. Instead it offers tentative but plausible options—did he? . . . what if . . . as if . . . Given the quasi-historical status of a figure like Judas, perhaps that is all one can ask. Poems like this do not reveal a confident and assured spiritual sensibility, but one impelled toward an ancestral belief while confuted and deterred by a quite different, secular understanding of the world.

The problem, for a writer without illusions but steeped in a tradition, is whether, and how much, to give in to the challenges and assurances of belief. In his search for a way to present his dilemma, Di Piero invokes Giacomo Leopardi, Italy’s classical master. He offers three particularly effective adaptations of Leopardi’s verses in his own “Three Poems.” The second one seems addressed to himself: 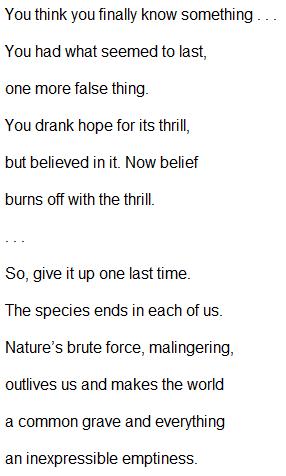 This is not a sentiment common in Di Piero, whose work is usually life-affirming and energetic. But it does not seem merely assumed for the occasion. And yet, in spite of this bleak finality, the self struggles on, and the third poem ends:

then I invite eternity, the lost seasons,

my own moment’s noise. I exist

to crack the perfect image,

the thing I love, then lose it

in the sumptuous chaos of my heart.

It is not easy to point to a single perfect poem in this collection. Di Piero is a poet of inspired moments—of textures rather than forms. He is also a poet who is stirred by the details of the world around him, and who is singularly gifted at capturing those details in words and conveying the force of his feeling to his readers. He tells us of a lover’s breath “tiding in my ear.” He shows us how “the moon’s dense light pebbles through the leaves.” He can teach both readers and writers much about the force of an unexpected but just-right word.

But if I could identify an outstanding achievement, it would be an atypical poem, one making uncharacteristic use of meter and rhyme, and—perhaps because those devices undergird it—hazarding an unusual revelation of vulnerability. The poem is called “The Divine”; it is set on the seaside. Here are its last two stanzas:

My voice going out has nothing

new to say, no slight

shock of self to lend

Teach me not to love

the flattery of foam

and salt. Teach me to learn

I have nothing of my own.

Chinese apples, for which this volume is named, are pomegranates, a fruit composed of many small fruitlets packed into sections. The book is aptly named, for it comprises many small, savory moments, and one leads to another. But beware. There are nuggets among them.[/private]