In the Grey Zone

The Rampage by Miroslav Holub. Translated by David Young, with Dana Hábová, Rebekah Bloyd and the author. London: Faber, 1998. £7.99.

That the English version of this book was published almost a year before the Czech is hardly surprising. Miroslav Holub, like several other Czech writers the majority of whose careers were overshadowed by a repressive regime, learned to rely on audiences and languages beyond his homeland. Milan Kundera, who now writes in French, comes to mind; Josef Sakvorecký too, whose novels occupy a strange hinterland between Czech and English and can only be fully appreciated by those readers who know both languages; and the most poignant case of all is that of Ivan Blatný, a gifted lyric poet who emigrated to England in the 1950s and lived out his years in mental asylums writing bizarre and at times brilliant macaronic poetry which moved from line to line between English, German and Czech. It is in such dislocations of language that political repression leaves its most lasting mark, and not in the literature of overt dissidence, which the younger generation of Czech critics is now discovering to be dull and repetitious, however courageous and necessary it was in the years of left-wing oppression.[private]

Holub has remarked that the process of translation into English is an integral part of his creative process, with the arrival of the English version often making him turn back to change the Czech text. This makes it difficult then to approach The Rampage as a translation of Narození Sisyfovo, because it is in a strange way the original also. (I should also say that the Czech text of the book which I have is an uncorrected proof so it is possible that even more changes will be made in the light of the publication of the English text.) One of the consequences of this is that nothing, on balance, is lost in translation. There is a world of difference between reading, say, Seamus Heaney or Paul Valéry in the original and in translation, but Holub’s Czech holds no pleasures not available in English.

Indeed, he is a more integral part of British poetry than Czech. One can hear him echoing in many British poets, whereas on the Czech scene while he is acknowledged as a senior poet, he is by no means a central one. An excellent recent study of Czech poetry did not even mention him in the index. I asked a Czech poet why few people in the Czech Republic read him and he said there are two reasons: one, that he is a scientist (and how could a scientist be a poet too?) ; two, that his dissident papers are not in order. By this he meant that Holub continued working as a scientist through the “normalisation” period of the 1970s and while he only began publishing again in the 1980s when there was a political thaw, it was still a time in which many of his fellow writers could not work or publish, and in some cases suffered brutal treatment at the hands of the State.

The first reason is not really worth addressing and says more about Romantic ideas the Czechs still have about their poets than about Holub’s poetry. The second is more understandable, but it is hard to imagine foreign readers or later generations of Czechs caring much about such gradations of guilt. Holub was neither the court poet of a dictator nor did he protest and suffer (as for instance Véclav Havel). He belonged, as did most people, to what is called the “grey zone” : not for the regime, but not speaking out openly against it either. (In this respect it is worth remarking that the title of “non-person” which described him in the blurbs of his English collections is misleading; it has no equivalent in Czech.)

Arguably his occupation of this grey zone, with its special tensions and threats, created his allure for English readers. Knowing that the writer lived in a Communist country encouraged them to read a coded political meaning into everything. Holub’s unrelenting use of the perspective and vocabulary of science slotted in well here too, as it enabled comparisons between the hubris of political power and the more fundamental horizon of nature, as revealed through the microscope. Thus all the presumptions of dictators and Romantic idealisations could be curtly demolished with a knowing smirk. That Holub’s most natural form is allegory also helped, as it encouraged the reader to look constantly between the lines for traces of lives under pressure, for desperate messages in bottles washed up on the shores of England and America (even when Holub was driving at something different).

Now, almost ten years after the fall of Communism, Holub, like other Central European writers whose back catalogues are beginning to look like yesterday’s news, faces a new challenge. The subtitle of the Czech text (“Poems 1989-1997”) boldly indicates his intention to chart the course of the nation since the Velvet Revolution in 1989. Typical of this mode is ‘At Last’ : 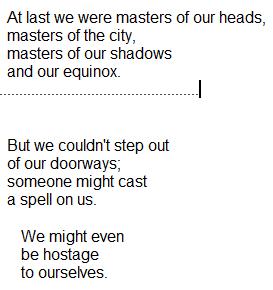 Elsewhere he confronts the excesses of capitalism in the Wild East, where “for the murder of, say, a creditor, one pays/ less than for a Mercedes 230”. And there is a clear-eyed pathos in his descriptions of the suffering of children.

But for the most part the book, as William Scammell remarked, displays a “preachiness, garnished with the periodic table”. His continued use of allegory is also somewhat tired and in places obscure. It is as though Holub has registered the political changes on the level of content but not on the level of form. Allegory was an important device for encoding meanings subversive of left-wing hegemony in the dark days, but his continued use of the mode in The Rampage looks like a case of habit winning over the impulse to observe and reassess. I doubt if even the back-room boys at the Kremlin or the Pentagon could get to the bottom of this:

In a barred chamber
on web-draped walls
the coffee dregs mount
the oriental silence of being deepens
and the only human drama
is premature ejaculation.

Imagine this is written by a poet under pressure in a land of which you know little: you crane to attend to the meaning. Imagine it’s by a middle-class man living in a country much like your own: it’s just a vatic mumble.

Now that Communism is gone, the poets of Central Europe and Russia will have to find other reasons to engage us. Holub, insofar as he is stuck in old grooves, is representative of Czech poetry in general at the moment. Poets here have not yet managed to move beyond the divisions and allegiances of the past, with a lot of work still derivative of the Beats and the Surrealists. Perhaps most interesting of all are the recent revelations of poetry which very few people (even among those in the samizdat loop) knew about during the 40-odd years of Communism. For instance, last year the senior playwright Josef Topol published to great acclaim a collected poems, a body of work hardly anyone suspected of existing. And there has been a steady stream of posthumous publication of the works of Ivan Blatný. It is this recovery of the unknown past that probably holds the most hope of exciting developments in Czech poetry for the next decade or so.[/private]