If Shoulder Season were a town, it would be a deserted one. All evidence of life—buildings, boardwalks, beds and tables, monuments and blankets, pots of flowers, tools, cars and cribs—would be left intact, the people gone. The only sound would be a voice emanating from a speaker left on somewhere. Wandering into this town, so eerily empty of human life, we would naturally be attracted to the disembodied voice: Who is speaking? What is it saying? To whom is it addressing itself?

If an orchidophage’s tastebud magnified

Clearly, someone is concerned with the bacterium of an orchid—more specifically, the taste bud of said bacterium. How the taste bud may or may not resemble the thing it has invaded (the orchid), and how this resemblance relates to the speaker’s “buds” are implied questions as well. Will the speaker’s taste buds also mimic the thing(s) it invades, in this case (indubitably!) “pricking ice cream cones”?

This may be the only voice we hear. It’s important we get it right. Do bacteria invade orchids? Do bacteria have taste buds? Do ice cream cones “prick”?  Is the insertion of “indubitably” a verbal wink to the listener? If so, why? Is it all supposed to be funny? To whom? Who is the audience for this joke? What is the joke, exactly? Joke or not, we want to know: is there sense to be made of these lines? (The joke can’t be “gotten” without a background of sense.) Or is the speaker talking to herself? Wandering into Shoulder Season is as mystifying and estranging and frustrating as this.

It can be rather quickly ascertained that the voice in this collection is educated (or well-read), fanciful (“orchidophage”), ironic (“Win-Win”), jokey (“indubitably”) and cool (that is, unemotional, though surely “hip” as well).  And, while the semantic sense doesn’t quite add up, at least the syntax is recognizable, and syllogistic in form. Maybe we don’t need semantic sense to understand the voice. Maybe the syntax alone works as sense. Here’s my attempt with the same syntax, simpler terms:

If an [anteater’s] tastebud magnified

So my buds indubitably mimic ____ (insert something “funny”).

As for the funny part, how about:

If an [anteater’s] tastebud magnified

So my buds indubitably mimic [a prick].

Now it works as a broad-based (pun-intended) blow-job joke as well as a serious rose-has-thorns (roses start as buds!), along with a sleeping beauty allusion—and the whole apparatus can be easily be imported back into the orchidophage lines. It even salvages one of the original words (“prick”). But this is a lot of work for the reader on a handful of lines, and the book is 81 pages long.

Since, in Shoulder Season, a voice is all we have, and that voice doesn’t satisfy our need for semantic sense, maybe we can be satisfied with the feints and fooling, the display of erudition, the unusual phrasing, and not worry about ratio of noise to signal. The collection as a whole is mostly purged of human drama and personal revelation, though occasional domestic references float up and disappear without purpose.

Maybe the tone provides the sense. When Frost talked about “the sound of sense” his analogy was to that of listening to voices through a closed door. Though it’s impossible to understand the context of the words, we can understand the tone (joyful, woeful, pleading, angry, and so on) and cadence (hurried, leisurely, halting, measured, and so on) and thus glean the “sense” of the voice. As with visual cues (like gesture, facial expression, physical appearance), voice cues provide information that enhances, contradicts, extends, or even eliminates the need for the meaning of the words themselves (as demonstrated most famously by Lewis Carroll’s “Jabberwocky”). It’s best to dispense with word meanings altogether:

Two flags nuzzle each other in the desultory gust

fleeing the trees, who are cruel to one another, shading their

the flags don’t give any shade at all.

On the anniversary of our country

we throw dynamite at the air

These lines seem to be meaningful. Are they? The syntax works. The tone is ironic. The lines have flags in them, and the fourth of July. They also have small business and a loose confederation. Perhaps it’s a political poem. Perhaps it’s a poem about how poems are like countries and small businesses that keep their populace (or words) confused. Or maybe it’s more about how poems are machines made of words and words don’t have to mean anything in particular–they just have to serve as components. Perhaps it’s about how poems shouldn’t be examined too closely because they’re not supposed to be real or true or taken as something worth thinking about, and if you start examining them too closely you might get mad and revolt. And, really, why should it matter that flags don’t “nuzzle” in a gust, desultory or otherwise (let alone how a gust could even be desultory)? Why should it matter that everything after “because” isn’t funny or surprising or true—literally or metaphorically or emotionally? 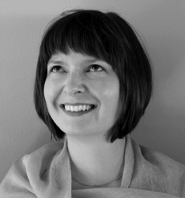 Why can’t I just stand in the town square and listen to the anonymous voice, pretend it’s saying something meaningful or beautiful or even informative, and stop asking questions? Simple. I want poetry to matter. Not only that, I insist that it matter.

This question of mattering, first posed so well by Dana Gioia, continues to haunt contemporary poetry. But for poetry to matter, do things need to matter to the poet, or do they only need to seem to matter to the reader?  Poets prove time and again that age means little, origin means less, and that for any great work the proof is on the page, not in the life.  So, while there has been much talk about poets needing to dig ditches to improve their poetry (rather than digging into their bank accounts to pay for seats on the MFA train), I am not convinced that so-called “real life” helps a poem matter all that much to a reader.  What matters to the reader, to this reader, is what’s on the page. For example, here is the entire title poem:

On the strength of the light in the southeast

I could surmise this isn’t the time for poinsettia.

fall from a cryogenic layer of air

eagles use as lorgnettes. It’s unseasonable

judging by the light in the southeast.

The poinsettia has been delicately

in attitudes of warm jouissance

so that a cuticle of dried blood hue

encroaches on the edges of a lively red,

then altogether drops to the ledge a corpse.

On the strength of this I could prise

piccolo jonquils out of April edemas.

There is certainly cleverness here, of the Ashbery brand, and the poems have a good education and a lovely whiff of eau de Armantrout; but without a sense that this poetry matters, I am left holding another handful of interesting phrases, thinking about whether to order a pizza or eat in tonight. Reading should not be harder than writing. I shrug and put the book down. It must be shoulder season.