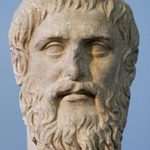 The first literary dandy of whom we still have record was Plato—who was unquestionably the greatest “exquisite” of his day. This will strike most modern readers as astonishing or inconceivable but it is neither for those who know their Greek. As a young man in love, he wrote epigrams to his courtesan Archaeanassa (which are still preserved in the Palatine Anthology) and was sufficiently conceited in his manners and dress that he drew the ire, more than once, of Diogenes the Cynic. We know from the Lives of Diogenes Laertius that the young Plato “applied himself to the study of painting, and that he wrote poems, dithyrambics at first, and afterwards lyric poems and tragedies.” Most of these works have not survived. We also know that Plato was “much assisted by Epicharmus the comic poet, a great part of whose works he transcribed” and that he was “the first person who examined the subject of grammatical knowledge scientifically.”

The philosopher had always wished rather publicly “to leave a memorial of himself behind, either in the hearts of his friends, or in his books.” Was ever a man’s wish granted so fully as his? The dialogues are everlasting models of exquisite style, of course, and he must have labored mightily to craft them—the first clause of the “Republic” was apparently found written in nine variants in one of his notebooks—having no precursors in the language of his day, or at least that have come down to us. There is a studied perfection to everything the man wrote that has appealed to the most fastidious minds in every age—apparent even in his early poems, which Shelley thought the most perfect in the Greek language. Even his contemporaries were impressed: we know that Aristotle considered Plato’s treatises as a new art, as “something between poems and prose.” It is for such style, as much as for his sublime thought, that he remains so revered.

Those who have imagined the sumptuous feasts and all-night drinking parties of the Symposium have wondered at the delights and extravagances of Athens at its height. We do well to remember that Plato records a poet’s party, hosted by Agathon to celebrate his first victory in the theater festival dedicated to Dionysus. (It is a very drunk Alcibiades, half-naked, whose late entrance so upsets the other guests and effectively ends the dialogue.) Those who have seen the oldest and best preserved of ancient Greek paintings, the frescos on the Tomb of the Diver at Paestum, as I have, may be shocked to imagine our revered masters amid such debauched scenes. That the wisest men of the ancient world thought nothing of spending their nights reclining together on pillowed couches, and drinking mixed wine until dawn, while discussing the great matters of the day as slave boys and hetairai performed on the aulos and barbiton for them—it is a vision for those who consider our modern-day symposia as the drab and crassly professional lectures of salesmen and teachers in hotel conference rooms the world over. (Even our modern bacchanals—our raves in Ibiza and Mykonos—are arid nullities compared to what we witness in the elegies of Theognis of Megara.)

This golden age—of the greatest minds playing kottabos and singing skolia throughout the night—is brought to an end, finally, by the relentless advance of the boy who Aristotle tutored. The tales of the court of the Great King are full of intrigue, and luxurious excess, to be sure—but not of literature mighty enough to matter to his descendants, it would seem. And we must pass over the library of Alexandria, and its scholars, as well—many of whom must have been literary exquisites beyond anything the world had ever known. One thinks of Callimachus, in particular, perusing the entire collection of Aristotle’s books after he bought them. The mind reels at the treasures of those catalogues! What a circle of learned men! They had before them all the masterpieces of ancient Greek literature, and all the accumulated knowledge of the world!  If we find the Pleais a little too learned and a great deal too dull for our tastes, it is no great matter. There may come another time, with readers who find more pleasure than we do in the love poems of Hermesianax, or the astronomies of Aratus, or the 1,474  iambic trimeters of Lycophron’s Alexandra—the willful obscurities of which, so famous even in antiquity, did not preclude it from being popular among the citizens of Byzantium, hundreds of years later.