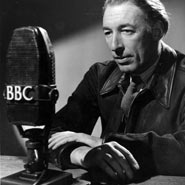 Just as Ben Jonson bore the unfortunate fate of living in what would become known as the “Age of Shakespeare,” Louis MacNeice lives in the long shadow thrown by his exact contemporary, W.H. Auden, who dominated his generation of poets and gave a name to the “Age of Anxiety” (Auden’s book of that title begat a symphony by Leonard Bernstein, secured a Pulitzer Prize for the recently naturalized poet, and was hailed by the New York Public Library as one of the most influential books of the last century). Together they suffered the temporary indignity of being joined as ingredients of “MacSpaunday,” the belittling coinage devised by critic Roy Campbell in his book Flowering Rifle. He amalgamated the names of the four Oxford “thirties poets” who were frequently, and unfairly, thought of as indistinguishable (anti-modernist in poetics, leftist in politics): Louis MacNeice (“Mac”), Stephen Spender (“sp”), W. H. Auden (“au-n”), and Cecil Day-Lewis (“day”).

It has become increasingly clear in recent decades that MacNeice, once consigned to the lower three-quarters of this composite caricature, has much more to offer than those who comprise the bottom half. Spender will likely be remembered largely on the strength of his mid-life memoir World Within World, though he proved peerless when posing in the role of dapper English poet, whether taking tea at an English lawn party or more potent tipples at lunch with Jacqueline Kennedy Onassis (in some quarters, his fabulous lifestyle earned him the derisive label “toady,” and, a real stinger, the “Rupert Brooke of the Depression”). Cecil Day-Lewis is still thought of as a charming but not terribly important poet, remembered for his honest and ironic reworking of Christopher Marlowe’s “The Passionate Shepherd to His Love” (which most readers will recognize by its first line, “Come, live with me and be my love”) and his translations of Virgil’s Georgics and Aeneid.

MacNeice is a separate case, and, while relegated to second place in the pantheon of English “thirties poets,” he is a much closer second than had earlier been imagined. In fact, it seems that if there is a chasm dividing the talents of his generation MacNeice stands on the same rim as Auden, waving to the remaining two across the way. Although his poetry gradually suffered as he took more assignments from the BBC-radio plays and other “hack work,” as he termed it, to keep body and soul together-he nonetheless assembled a remarkable oeuvre by the time of his death (his newest Collected runs to 800 pages). In 1963, he succumbed to viral pneumonia contracted while wandering the moors in a rainstorm after spelunking in a Yorkshire cave to gather sound effects for his last radio play, Persons from Porlock.

His poetry is musical and humane, possessed of wit, flair, and exuberance. From his first published work Blind Fireworks (now considered juvenilia) in 1929 to the immediately posthumous Burning Perch in 1963 (published only days after his funeral) he brought out no fewer than fifteen volumes of poetry (if one includes Letters from Iceland, co-written with his coeval Auden). His book-length poem, Autumn Journal, is generally viewed as one of the great interwar English poems, presaging both fascist victory in Spain and German bombs raining on London. His short, singing lyric “The Sunlight on the Garden” is a startling, small masterpiece that encapsulates the alarm of a generation preparing for war while courting nostalgia as it bids farewell to peace and youth. Born in Belfast, tutored at Marlborough and Merton College, Oxford, a resident of Birmingham and London, eventually a world traveler, MacNeice has always straddled the trenches that define English, Irish, and, of course, British poetry of the last century. This has only added to his appeal.

As an undergraduate, I was obsessed with MacNeice. My mania was so acute that I actually recorded tapes of myself reading his poetry to play back while driving. Years later, when I excavated one such tape from my mother’s attic, it took me a moment to place the strangely beautiful words. The unmarked Maxell cassette tape contained my reading of “Eclogue for Christmas,” one of several eclogues composed by MacNeice. It is a stark, modernist interpretation of the ancient bucolic form, retrofitted for a restless century. I found it rousing and at times terrifying. A friend in London recently told me she could “barely even read” the poem: “I find it so chilling; the language is so charged.” Permit me to reproduce the first lines of the long poem:

A: I meet you in an evil time.

B. The evil bells

Put out of our heads, I think, the thought of everything else.

A. The jaded calendar revolves,

The excess sugar of a diabetic culture

Rotting the nerve of life and literature;

Therefore when we bring out the old tinsel and frills

To announce that Christ is born among the barbarous hills

I turn to you whom a morose routine

Saves from the mad vertigo of being what has been.

B. Analogue of me, you are wrong to turn to me,

My country will not yield you any sanctuary [. . .]

This is simply stunning, by my lights, and unreservedly modern, in the best sense.

When I went abroad to study at Oxford University for my master’s degree and doctorate in English Literature, I was lucky to work closely with Jon Stallworthy. He is perhaps best known in this country as one of the principal editors of the Norton Anthology of Poetry and author of the authoritative (and first comprehensive) biography of First World War poet Wilfred Owen. In Britain, he is also known as the author of numerous collections of poetry. In the mid-nineties, he published his second biography, on Louis MacNeice. The publication was attended by some ballyhoo. I remember strolling one misty evening through the streets of Oxford. I noticed large placards in a bookstore window announcing the book’s publication. Alongside a prominent, and quite striking, photograph of the poet were two lines from his haunting poem “Autobiography”: “When I was five the black dreams came; / Nothing after was quite the same.” I was gripped. I felt immediately at home. The Stallworthy biography was widely praised, and it helped to fetch MacNeice his rightful place in our accounts of modern poetry. I am happy to see that the amplification of MacNeice’s reputation and legacy continues apace.

In his centenary year, I am delighted to have assembled a special issue devoted entirely to the life and works of MacNeice. Our London correspondent, Katy Evans-Bush, retraces MacNeice’s steps in her study of Autumn Journal. Visiting the poem’s locales in season, she notes that the trees are still gone from Primrose Hill, cleared before the war to allow anti-aircraft guns “to take the view.” She explains that MacNeice was “very much a man of his own time and his own daily, physical world—an anti-‘Romantic’ sensibility that can be found in poets from Catullus to the New York School.”

John Drexel explains why “The Sunlight on the Garden” has remained such an admired and effective poem, showing us that when “read as a whole rather than as merely the sum of its parts, ‘Sunlight on the Garden’ operates so brilliantly on so many levels that it amply illustrates Eliot’s observation that ‘genuine poetry can communicate before it is understood.'”

Our Washington correspondent, Sunil Iyengar, traces MacNeice’s life through the lens of Jon Stallworthy’s superb biography, advising that “in this year of Auden’s and MacNeice’s centennials, we may as well acknowledge that the singular example of Auden-chimera, virtuoso, polymath-may be hazardous for most young poets, who would do better to pursue MacNeice’s steadfast aim of writing good and often great poems.”

Our Irish correspondent, Maria Johnston, considers the importance of the long-awaited publication of MacNeice’s Collected Poems (available from Faber in London; the last collected was issued in 1966, edited by E. R. Dodds, revised 1979). She reminds us “MacNeice’s influence on contemporary poets has been born out of his own deep engagements with elsewheres, his vast scope and his deep sense of the complexities of human existence.”

Finally, controversial young critic James Matthew Wilson looks back at Letters to Iceland as literary travel book, experimental hybrid, and summation of the “essence of artistic modernism,” a bookend to the age begun by Eliot in 1922 with The Waste Land, and a kind of “final masterpiece that takes [earlier modernist works] all for granted and looks behind and beyond them with a skeptical eye.”