As Reviewed By: Preston Merchant

Mr. Arnold takes risks with abilities throughout, sidestepping niceness and easy turns. Above all, he allows poems to open multiple reflections and leave questions alive and moving. It is hard to say what his highly individual writing may represent in the current spectrum of American poetry.

I suspect Merwin’s difficulty in locating Shells in the “current spectrum” has mostly to do with the fact that the book is squarely middle-of-the-road, despite some of its giddy excesses. Shells is a competent collection of polished poems. One can certainly find fault with some of Arnold’s strategies–abandoning formal constraints like rhyme the moment they become inconvenient, for example–but by and large the book is readable, even graceful. Arnold doesn’t seem to be staking great claims, though, or stepping beyond the usual purview of contemporary poetry. Most of what’s here–the material and the presentation–is what you’d expect. Merwin’s belief that the book is “daring” is misguided.[private]

In “Grace,” an elegy, Arnold addresses a young man who drowned in the Mississippi River in Memphis: “Vienna choirboy gone banshee” 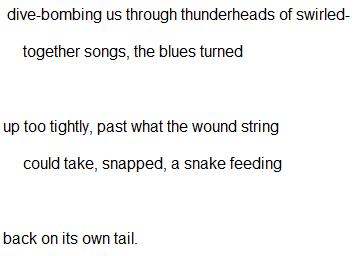 The poem is a prayer to Jeff Buckley (1966-1997), patron saint of “the loss of innocence,” a Rimbaud figure for the poet. Arnold describes Buckley’s furtive homosexual encounters tenderly, Buckley lullabying his paramour, a married man, “back to the sad eroded sleep / of the come-unraveled.” When Buckley drowns (an accident, apparently), Arnold is in the south of France, following the pilgrimage route that honors St. James of Compostela, touring a “crypt that smells of water / dripped through bones.” The theme of the young man “dead by [his] own wild-child-eyed exuberance” is rendered exquisitely, respectfully by Arnold. Though the gestures of the poem, including the summoning of a Christian saint at the end, are the standard stuff of elegiac poetry, Arnold’s take here is a mixture of the tough and tender.

Another fine poem is “Boots,” an ode to footwear, well worth quoting in full: 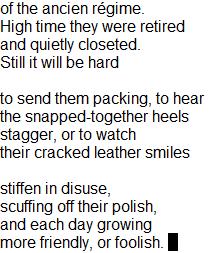 These compressed lines (mostly of six syllables) give Arnold a great sense of control and precision, especially as he balances image with commentary. The poem is actually quite moving; pathos in a pair of shoes is hard to come by. Arnold gives the poem an Eastern Europe–Fall of Communism air in a near-elegy for the most prosaic of things, but these things bear humanity’s tired burdens.

Nearly all the poems in the book are well crafted, though none rings as true as “Boots.” “Locker Room Etiquette” is a set of instructions, with only one that you probably couldn’t see coming (“your head should never / drop below the armpit”). Pronouncements like “friendships based on food are rarely stable” (a kind of sound byte for the book) from “Hot” promise more than they deliver. In most cases, the idea behind the poem (its payload) is significantly weaker than Arnold’s execution. Shells sparkles with rhetorical energy but fizzles when your eyes become accustomed to the light.
***

Davis McCombs’ Ultima Thule charts territory not often found in contemporary poetry and does so with sympathy and precision. McCombs presents a speaker in the form of Stephen Bishop, a slave of the man who owned Mammoth Cave in Kentucky in the mid-1800s. Bishop served as its guide and oracle, becoming something of an attraction in his own right. The book opens with a sonnet sequence in Bishop’s voice; the middle and final sections (the last, another sonnet sequence) are in the poet’s voice, drawn from his experience as a park ranger and guide to Mammoth Cave. Throughout, the poems are quietly accomplished and intelligent.

McCombs avoids heady pronouncements in his poems and resists–much to his credit–any temptation to make Bishop a Virgil in the Underworld. Limestone caves are wet, McCombs knows well, so he cleverly relocates the Inferno. A caving party descends only to return to discover a massive brush fire:

The opening sonnet sequence moves rapidly, fueled by Bishop’s own sense of discovery. “I was drawn to wonder, the margins of the map,” he says in “Ultima Thule.” He knows the cave but is most intrigued by the reactions of the well-to-do folks from above, who propose, among other things, that one open section of the rock be converted into a ballroom. “Mere fancies,” he notes:

Bishop seems wholly of the dark world he inhabits, at home among the fish with no eyes, comfortable in the absolute silence. Top-worlders are strange to him; to them he is both an adornment and necessary implement on their journey. It is to McCombs’ credit that he does not turn these poems into post-modern meditations on slavery. McCombs’ Bishop, and the poems he speaks, are well spoken and dignified, rich in their understatement.

The final section stands in dialogue with the Bishop sequence; here McCombs himself takes on the role of guide and seeker, expanding the world that was necessarily limited in Bishop’s eyes. McCombs’ seeks a graver context for the cave and the human relations that are affected by it. Geology, history, myth, and religion enter the realm–some topics Bishop could only guess at–but McCombs’ post-scientific wonder is undiminished. Here is “Solution Cave,” which meditates on the forces of water at work below the surface: 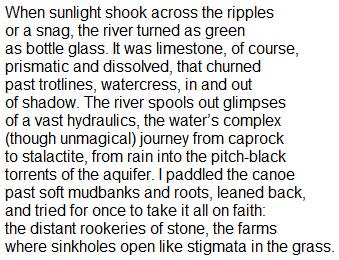 What McCombs describes as “unmagical” is magical nonetheless, still requiring a measure of faith for the observer to believe that the simple chemistry of water and stone can produce such wonders below. Only when the sinkholes open can he find evidence of the processes at work. This is the appeal of McCombs’ book–there is nothing jaded or cynical, shopworn or strained in his work. There is only an honest, even charming, engagement with the history and science of Mammoth Cave and the people who were fascinated by it.

Preston Merchant has worked as a documentary photographer; he is at work on a project on the worldwide Indian diaspora. A preview, and other galleries, are available at his website. His poems, reviews, and translations have appeared in the Antioch Review, Sewanee Review, New England Review, Missouri Review, Tameme, and Verse. He also edited the special feature of Verse on poets from India. He lives in New York City.
View all posts by PMerchant →
Bookmark the permalink.