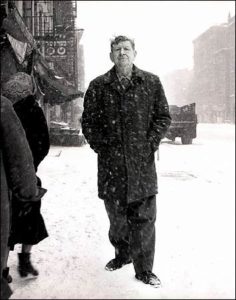 W. H. Auden is ordinarily depicted as the leading, in fact the best-loved, member of his generation of English poets, the generation falling between the airy heights of T. S. Eliot and the grim reactionary postmodernism of Philip Larkin. Just as John Ashbery managed to decamp from the whimsical and often wallowing group known as the New York School, Auden gained notoriety and reverence that left him at a remove from his contemporaries. His intimate alliances with such photogenic figures as Stephen Spender, Louis MacNeice, Christopher Isherwood, and Benjamin Britten lent dramatic proportions to his career and personal life, and his intellectual light reflected well on them (although such collaborations as arose were not without their faults: Auden composed the libretto to Britten’s dreadful opera Paul Bunyon, co-authored three middling plays and Journey to War with Isherwood, and published the sometimes limp Letters from Iceland with MacNeice; however, he redeemed himself among music lovers with the stunning libretto to Igor Stravinsky’s opera The Rake’s Progress). Though hardly the most handsome of his generation at Oxford, he was nevertheless bathed in warm admiration and outright loyalty from a devoted circle of companions, as much for his intellectual powers as his audacious charm and humor. His wit is renowned, and a survey of any anthology of quotations will surface more than a few by Wystan, including such favorites as “thank God for books as an alternative to conversation” and “one cannot review a bad book without showing off.”

Fame came quickly and at a young age for Auden. Upon arriving at Oxford, he insisted, when asked what future profession he intended to assume, that he would be a poet. His tutors were incredulous but intrigued. If anyone could achieve such a thing, it would be this self-assured young man. By his second year at Christ Church College, he was at the heart of a burgeoning group of young poets and intellectuals, who sought his opinion on a variety of subjects. Though he graduated with low marks, he had already distinguished himself as a poet, self-publishing his first chapbook while at university and placing his first book, Poems, with Faber and Faber at age 21. A few years later, King George VI presented him with the Gold Medal for Poetry. After some time spent investigating the homosexual café world of Berlin with Isherwood, he found himself, by his mid-twenties, considered the most important poet of his generation. Later in life, he would return to Oxford to take up the post of Professor of Poetry and hold his daily informal salon at a café in the Covered Market, at the center of Oxford. Much later in life, having grown somewhat disenchanted with his annual routine of a half-year in lower Manhattan interpolated by seasons in either Italy or Austria, he returned to Christ Church to take up residence in meager accommodations on the college grounds. Sadly, he found himself isolated by fame and largely ignored by students more keen to meet an authentic beatnik than the grizzled old poet. Today, undergraduates slurp cucumber soup and swap jokes in the echoing Christ Church dining hall beneath his admonishing portrait, which always seems to be hung at a slight angle, as if slouching.

As with such giants as Henri Matisse and Ludwig von Beethoven, it is customary to divide W. H. Auden’s career into two distinct phases, bisected, in his case, by the Second World War. The earlier poetry, particularly that of the thirties, is defined by a preoccupation with political and historical matters, while that of the forties, fifties, and particularly the sixties, is concerned with more modest affairs such as friendship and the household. Needless to say, this split, however accurate it may seem from a distance, is a preconceived notion, which his readers would do well to dispense with entirely. There is, however, a clear shift in mid-career from peripatetic European to convivial New Yorker, when he took up residence in various apartments in Brooklyn (with Paul Bowles, Thomas Mann’s son, and uber-stripper Gypsy Rose Lee and friends, the subject of February House by Judith Moore) and the West Village (where he shared an apartment with the younger American poet, his life mate, Chester Kallman). Around this time he also became an American citizen and embraced conservative Christianity, despite his homosexuality, which was open in his circles but hardly advertised publicly as was Allen Ginsberg’s (a young composer once remarked at a dinner that Auden “doesn’t love God. He’s just attracted to him”).

A devoted formalist, it can be said that the rigorous technical consistency of his poetry mirrors its moral depth, a type of well-wrought urn, though hardly the reflexive sort envisioned by the famous critic Cleanth Brooks (who had John Donne and his fellow Metaphysicals in mind). One is surprised by the dramatist’s flair and composure of Auden’s early recordings. From “The Wanderer” in 1930 on to “In Time of War” in 1938, his voice is congenial and already avuncular in spite of his youth. Unfortunately, the cigarettes caught up with him, and his once agreeable voice went gravelly. Heavy smoking and daily drinking took their toll, and from the scarcely intelligible (which is to say poorly preserved) recording of “In Memory of W. B. Yeats” onward, his voice becomes harder to take. By the midpoint of “Friday’s Child,” recorded in 1958, he sounds as though he’s just climbed up to a fifth-floor walkup.

These recordings hold substantial textual-scholarly interest. Auden not only substitutes individual words during performance (for instance, “invade” for “invest” in the first line of the eighteenth stanza of “Thanksgiving for a Habitat”) but whole titles. “Fish in the Unruffled Lakes” is announced simply as “Song” and “Death’s Echo” as the more forceful “The Dead Echo.” The recordings also make plain his use of slant rhyme and what could uncharitably be referred to as “eye” rhyme. In the otherwise chiming final section of “In Memory of W. B. Yeats” one witnesses, or rather hears, the following lunge:

Earth, receive an honoured guest:
William Yeats is laid to rest.
Let the Irish vessel lie
Emptied of its poetry.

Of course one thinks of Blake’s rhyming of “eye” with “symmetry” in “The Tyger” and is reminded that such deviations from pure form are usually welcome when handled by a master. Image is far from central in Auden’s poetry; philosophical and ethical assertion mingle with political opinion or fact to form what could be called tracts or aphorisms:

The sons of Hermes love to play,
And only do their best when they
Are told they oughtn’t;
Apollo’s children never shrink
From boring jobs but have to think
Their work important.

Both Georgian traditionalists and many Imagist moderns were repelled by Auden’s poems, saturated as they are with leftist utopian ideology and studded with Greek gods, indignant jabs, and nimble pranks. J.D. McClatchy writes that Auden’s early poems seem as if written “by an anarchic Boy Scout on speed. There was a cocky, conspiratorial, shocking edge to them, and he would use schoolboy slang, Norse sagas, liturgy and metallurgy, camp or conscience-whatever suppressed energies might be available.”

Auden coined the term Age of Anxiety (securing the Pulitzer Prize for the book of that title in 1947), and has been described as the first English poet to feel at home in the twentieth century. The most prominent quality of his work is compassion, his belief in a world where “one could weep because another wept,” his vision of “Agape,” or universalistic uncorrupted love. Attempts to peg a program or project to his career are ill fated; like any great thinker, he evolved. Unlike Geoffrey Hill (considered in some circles the finest living English poet), who never retracts a sentiment or line of poetry, Auden turned his back on much of his own writing. The most enduring and popular line from “September 1st, 1939”-the day Hitler’s panzers jumped the border into Poland, effectively sparking the Second World War, also a poem that has gained great currency in the US since 9/11, when newspapers and websites began reproducing the poem-“We must love one another or die,” was thought unsuitable by Auden because, strictly speaking, it is not true. We may love all we like, but we will still die, though perhaps not so soon or in so ghastly a manner. The poem was perfectly timed, in an historical sense, on the eve of the most destructive war in history, but, as Auden later lamented, not a word of poetry could have prevented the horrors of the Second World War. Of course, great poetry is often at once true and a bit of a reassuring fib. He changed the line to “we must love one another and die.” He then realized how unlovely the line had become once relieved of its original rhetorical clout, so he eliminated it altogether. It was only much later, when assembling a Selected Poems, that he was persuaded by friends to restore the line.

Auden’s utopian meditations were formed in the shadow of the looming figures of Karl Marx and Sigmund Freud, but he eventually dismissed the political effectiveness of poetry. It is interesting that this is, in a sense, a reversal of Theodor Adorno’s insistence that after Auschwitz there can be no lyric poetry, by which he meant that no poem could exist in an entirely personal casing but must partake of the sweep and pull of history. Whatever can be said of Auden today-his early, naïve ideological entanglements, his tendency to repeat himself to interviewers in his later days, his slovenly lifestyle-he must be remembered for two things: first, his compelling commitment to friendship and its attendant compassion, which was extended to universal dimensions in his poetry; and second, his dedication to the life of a poet, as man of letters, editor, librettist, teacher, critic, as manifested in his tireless involvement in forging and sustaining the cultural landscape of England and America. For these things, we remain indebted, and these recordings are nothing less than indispensable to an understanding of the man and his works.