The Voice of the Poet Part 8: Robert Lowell 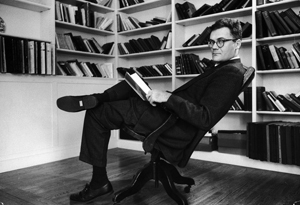 In his enormous Pulitzer Prize-winning account, Armies of the Night, Norman Mailer describes the kaleidoscopic tumult and turmoil of the 1967 march on the Pentagon to protest American involvement in Vietnam. It was an instant in history when the formal orders of the Old and New Left came together, sometimes reluctantly, with hippies, sectarians, self-styled revolutionaries, and demure New England intellectuals. This was perhaps the last time that such a bizarre gathering would occur on American soil. Among the intellectual elites in attendance and chosen as the avant-garde, literally the advance guard of the march, was the inconspicuous and professorial Robert Lowell, looking a bit capsized and alarmed by the day’s events. Mailer described him as America’s greatest living poet, though he also pointed out, in typical Mailer fashion, that the average National Guardsman assigned to defend the Pentagon would no more recognize America’s greatest living poet than much care about such an obscure status. Lowell is most celebrated today for his keen historical sensitivity, and he has been described, hyperbolically, as the greatest historian of his day. It is therefore fitting that he participated in what can be comfortably termed a crucial historical event at a time when his poetry represented the blending of intensely personal and broadly public concerns.

He began his career with the myth-embracing high style of T. S. Eliot and reached his climax with the startlingly plain disclosures that initiated the confessionalist tenor of the age (a tenor, it must be said, that persists to the present day in many quarters) before settling into his years of desperate decline, writing and rewriting blank verse sonnets amid nervous breakdowns and ruined marriages. This confessional style of his 1959 book Life studies was incredibly influential at the time and presented a pivotal shift in American poetics, a casting off of the grand historical assumptions nourished by modernists such as Ezra Pound and the stately New Critical poems of American postwar poets like Richard Wilbur. This style later characterized the works of the doomed John Berryman and absolutely dominated those of the equally doomed Sylvia Plath and Anne Sexton (Life Studies simultaneously set the tone and kicked open the door; he taught both Plath and Sexton at Boston University and was close friends with the manic Berryman). Both poles of Lowell’s career and all the restless sea between them are represented in these recordings, from the densely constructed and enormously effective “The Quaker Graveyard in Nantucket,” to the sparse late poem “Reading Myself.”

Born into one of the most prominent and oldest families in the country, Lowell spent his entire life after age thirty-when he won his first Pulitzer Prize for Lord Weary’s Castle, received a Guggenheim Fellowship, and was appointed Poetry Consultant to the Library of Congress-in the public eye. His comments on the state of the nation made the front page of the New York Times. Poets and educated readers waited for his poems in The Partisan Review with great anticipation. He was one of the last poets to achieve such prominence. After declaring himself a conscientious objector in a letter to President Roosevelt during the Second World War, he was jailed. Later, in a highly publicized gesture, he refused an invitation to Johnson’s White House. The southern accent he cultivated and preserved from his years studying with the critics Cleanth Brooks and Robert Penn Warren at Louisiana State University is audible in these recordings, yet the New England drawl of his home is perceptible beneath the otherwise weary, proper inflexion. The rise and fall of his speech is reminiscent of T. S. Eliot’s recordings for the Library of Congress-Lowell’s recordings were also assembled by the Library of Congress and as late as the mid-1990s it was still possible to find bins of marked-down vinyl LPs of For the Union Dead, in the library’s gift shop-and thus from the lofty but staid intonations of the High Anglican or Catholic service (Eliot converted in adulthood to the Church of England, Lowell to the Roman Church). Lowell projects rhythmic jolts and dips, fashioning a musical texture suggestive of his classical training, though the strains that increasingly dominated his private and public lives is also in evidence.

The recordings include early poems such as “The Quaker Graveyard in Nantucket,” and “Falling Asleep over the Aeneid” as well a generous number of poems from Life Studies, including the two poems most familiar to younger generations, “Skunk Hour,” and “For the Union Dead.” The cathedral echo of “For the Union Dead,” emerges as the most powerful moment of the recordings. Recited at the Coolidge Auditorium on October 31, 1960 (he had read it on June 5th of that year for the Boston Festival of the Arts, on which day the audience included Eleanor Roosevelt), it pulls the public struggle for civil rights together with a moral certainty that makes it one of the most powerful American poems of the century. It stands as a warning and admonition, holding a mirror to the country’s deeply rooted political hypocrisy, its civic indifference, self-absorption, and arrogance. His life was one of journeys, and the paths of self-discovery and revelation he experienced privately seemed to mimic that of the nation at large as it came to terms with its own imperial brutality and conceit. More than any other poet, he was fortunate to be in a position, both artistically and politically, to realize his complex vision. Like so many poets of his generation, he was, however, plagued by physical ailments, which resulted in his dependence on drugs, and he went through many unstable relationships and multiple marriages, as though endlessly seeking a happiness that would, in the end, prove elusive. In the last days of his life, he attempted to escape from a third, turbulent marriage to Caroline Blackwood, and he decided to return to his second wife, Elizabeth Hardwick. When the cab that picked him up at the airport arrived at her apartment, the cabby turned around to find Lowell dead in the back seat, pagan and Puritan, lost in the middle of yet another desperate journey.