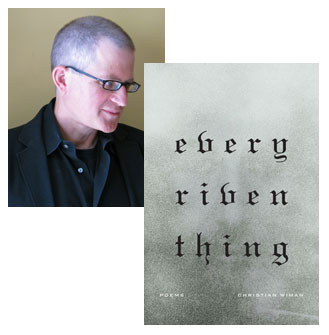 From its hardcover heft and granite-engraved dust jacket (remove the jacket and a black, bible-like, hardback cover is revealed), to its ivory paper stock and black section divider pages (complete with roman numerals blazoned in white), every riven thing announces the solemnity it aims to deliver and does: verses crafted as if with a chisel on stone, the weight of each line falling into the congregation of a hushed readership, organ sounding in the background—

There is no consolation in the thought of God,

he said, slamming another nail

in another house another havoc had half-taken.

grace is not consciousness, nor is it beyond.
(“Hammer is the Prayer”)

Wiman’s preaching style doesn’t truly take hold until the second section of the book, after the first section’s poems set the scene for a sensitive boy-child’s coming to reckoning with mortality. Though it takes awhile to get going, the lofty rhetoric rolls from Wiman’s tongue with alarming frequency and to no other purpose but to ruminate and moralize:

There is a lake from which no sun returns.

Brown, glintless, it lies in the land like the land.

If it is grief that brings him here, it is

a grief in which the land participates,

a dry grief, a grief of heat, in which the trees’

contortions tighten and the cacti crouch.

He stares and stares at the unchanging lake.

No question but that this poet knows his business. Such verses show awareness of meter, rhyme (internal and end), a talent for rhetorical use of repetition (“a grief in which the land participates,/a dry grief, a grief of heat, in which the trees’/”), apt metaphorical phrasing (“trees’/contortions tighten and the cacti crouch”), as well as a graceful use of syntax, especially of the compound-complex kind. But hark! The ghost of Shelley’s “Ozymandias” haunts with its “lone and level sands [that] stretch far away” and Hopkins hovers near that cacti “pitched past pitch of grief.” The nineteenth-century turn that Wiman favors is one that begins to require some indulgence on the part of the reader:

If I say I loved the seagull

tethered to its cry, the cypress’s imprisoned winds,

speak to the brink of my hands

soft and knobby as a kitten’s skull.

If I say I loved.

Edna? Is that you? But the nineteenth century may be preferable to the seventeenth, which is where the poems tend to congregate when they want to confront God or to impart wisdom (usually a little bit of both):

God let me give you now this mind of dying

into consciousness of all I lack

and of that consciousness becoming proud:

There are keener griefs than God.

They come quietly, and in plain daylight,

leaving us with nothing, and the means to feel it.

I struck the board, and cried “No more!” then fled Him, down the nights and down the days, shouting “Batter my heart, three-person’d God!” With stakes this high (life or death), it’s hard to believe in the reality of danger when the poems themselves fall back on the poetic strategies of another time. Where is the precipice? The fear? The heat that drives them on? Writing like Hopkins is a laudable accomplishment, a job jolly well done, but eliciting something original, as Hopkins did for his time, is what’s missing in Wiman’s work. One only needs to compare Wiman’s attempt to record spiritual struggles in these poems with those of his contemporaries, D.A. Powell and Franz Wright–both of whom have managed to write searing and wholly original poems dealing with God, mortality and spiritual suffering without invoking clichés of diction, form, or sentiments from centuries past.

If one believes in the biography as a necessary accoutrement to the work, then Wiman’s is unimpeachable (he has been diagnosed with an incurable cancer), but high-minded and concerned with important matters as these poems are, and as grounded in real biography as they purport to be, they fail to impart a sense of what’s at stake. They only talk about what’s at stake:

But the world is more often refuge

than evidence, comfort and covert

for the flinching will, rather than the sharp

particulate instance through which God’s being burns

into ours. I say God and mean more

than the bright abyss that opens in that word.

There’s no real sense of urgency, only an urgency once-removed, something talked about. If the “I” in this collection were a persona (and perhaps it is), I would object to its lack of persuasiveness. I am not convinced that a voice so careful, earnest, and proper (or a poet/persona so invested in crafting each line in the shape and echo of Hopkins, Herbert, Donne or others of their bygone ilk) is one that can take contemporary readers by the collar and shake them, or shock them, into an awareness that the poet claims to have attained with great difficulty. Suffering, hard work, and integrity do not, unfortunately, make an original, exciting, or memorable poem.

As for the collection as a whole, there are several poems here that strike me as exercises. (To put it more generously, they are intended to show Wiman’s range, that he can toss off a few on the side while forging the tough ones in the secret smithy behind the altar.) This is an unfortunate editorial decision, as the book would have benefited from a culling of at least 10 poems. Its ponderous tone is not alleviated, but instead trivialized, by the inclusion of such ditties as “The Wind is One Force,” wherein Wiman lightens things up by applying end rhymes to the same lot of grave observations and admonitions. Here, the reader is allowed to get up and stretch, greet his pew mates, and relax a bit. It’s all a rueful chuckle after all, this thing we call life:

it all goes soft as snores,

as if dreams were a course

a people’s hearts its source,

their bones its wake.