The Year of Turning Seventy

As Reviewed By: Lorne Mook

Those who know Charles Wright’s career know the story. While in the Army, in Italy, in the spring of 1959, Wright went to the shore of Lake Garda and read “Blandula, Tenulla, Vagula” near the spot where Ezra Pound had composed it, discovering—for the first time, at age 23—poetry propelled not by narrative but by association, the kind of poetry he was meant to create. Ten years later, Pound published the last section of his Cantos where, in Canto CXVI, he wondered if this poem that had occupied him for decades cohered. A year after that, in 1970, Wright published his first book; and since then, his poetry, whose split-level lines and free-verse music owe much to Pound’s influence, has prompted similar wondering—for Wright is fond of bringing together individual poems in larger and larger groups. For instance, his fourth book, China Trace, consists of fifty short poems, but he has also referred to it as a single poem in which the main character begins by saying goodbye to childhood and ends as a constellation, stuck in the sky and short of salvation. Wright then put most of China Trace together with poems from his first three books into Country Music: Selected Early Poems, following it up with “selected poems” for the 1980s (The World of the Ten Thousand Things) and 1990s (Negative Blue). And, then, he called these three books a trilogy. Readers of the poetry will, of course, disagree about how well these groupings actually cohere and how much coherence matters.[private]

Wright’s latest book, Littlefoot, raises the same issues in a new way, for it is the first to bear a promise of some level of coherence on its cover: on a clear white background, in small black capital letters, one finds the words “A POEM.” Littlefoot, named after one of the horses on his Montana ranch, moves chronologically through one year (October 2004 to October 2005) during which Wright (on August 25, 2005) turned seventy. A comparison to one of his earlier long (although not book-length) poems is inevitable: “A Journal of the Year of the Ox” also moves through a single year (1985) during which the poet celebrates a significant birthday (his fiftieth). Despite being a “journal,” it is highly structured, with references to three places (or groups of places) providing structure as well as thematic unity. The story of the Cherokee nation being forced away from a sacred part of their homeland (the Long Island of the Holston, in east Tennessee near where Wright grew up) appears in the January, April, September, and December sections. Visits to homes of literary precursors and a vision of Dante suggest others’ (to Wright’s humble way of thinking) more successful presentations of ultimate meaning. And Wright’s home in Virginia (contrasted with an August stay in a Holiday Inn on his birthday) is the setting for the September-December sections, in which the poet finds some meaning and sense of home even as he acknowledges an inability to find ultimate meaning or to feel perfectly at home.

In comparison, Littlefoot is relatively incoherent. The poem has thirty-five numbered sections, the number thirty-five evoking the beginning of The Divine Comedy and the midpoint of the three-score-and-ten lifespan that Wright reaches in the poem, as well as 1935, the year of his birth. But it’s usually difficult to see how one section relates to the next, and often just as difficult to see how, within the longer of the sections, one stanza relates to the next. Yet, even if the poem seems more like a verse journal than the actual journal poems of the 1980s, even (that is) if the calendar seems to be the only reason the poem is ordered as it is, there are still topics (familiar to Wright’s readers) that recur and make it possible to make connections and find meanings: topics such as loss; and memory; and the landscapes in which one feels the loss, and finds only memory of only some of the past, and therefore (as in “A Journal of the Year of the Ox”) falls short of finding ultimate meaning or an ultimate home. Wright states the loss, in terms too bland for my taste, at the start of the poem:

Then, in section 12, he revises the statement, indicating that some of the past does get repeated, in a way—in human memories (“in the mind”) and through nature’s seasonal regenerations (“in the world’s flow”):

Other things—images, stories, songs—recur and create meaning in Littlefoot. For instance, footprints from section 12 reappear in 23 (where the north wind is called “Bigfoot”) and 33 (where “The emptiness of nonbeing” is “Something to seek out and walk on, one footprint after the next”). In section 9, Wright retells beautifully Kafka’s story of the Hunter Gracchus, who dies only to have his death-ship wander from pier to pier in this world without ever reaching the next. It’s a poignant expression of a theme that goes back at least to the end of China Trace and that Wright has said he shares with Emily Dickinson: the impossibility of getting to heaven. He returns briefly to “the ghost bier of the Hunter Gracchus” in section 22, where it represents “A wrong turn, a lack of attention, a lack, it seems, of love” in the poet’s own life. In section 34, where the poem reaches its chronological endpoint, Halloween seems like a version of the same story, as some of the living dress up as the dead and wander from house to house. Finally, bits of hymns (all about memory or the dead or both) appear in sections 5, 7, 17, and 32 and culminate in a final section consisting entirely of A. P. Carter’s song “Will You Miss Me When I’m Gone.”

Just as there are many satisfying connections in Littlefoot despite its lack of coherence, there is much wonderful poetry despite a lack of consistent inspiration. Wright, who has said that he is after “the metaphysics of the quotidian” and that he “writes an eschatological naturalism,” is (in his earlier books and here) often clumsy when writing about metaphysics, and sometimes downright cheesy when using things from too low in the realm of the quotidian to make his similes. But he is often brilliant when describing the quotidian or the natural world with such loving attention to detail that something metaphysical or eschatological gets implied. On the one hand, he is capable of stanzas like this about the beliefs of some unnamed and vague “they”:

And capable of similes like these that are more distracting than illuminating: 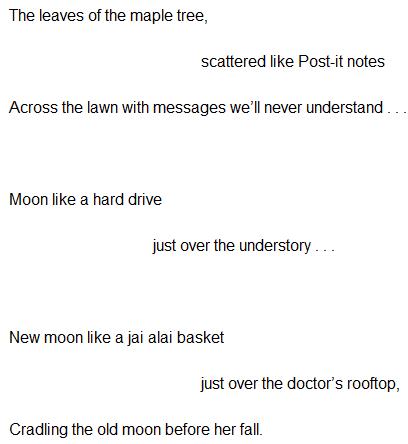 On the other hand, he is capable of a seeing so precise and a saying so musical that his language invokes something of the unseen and the unsayable, as here, when he describes a snipe on the surface of a pond: 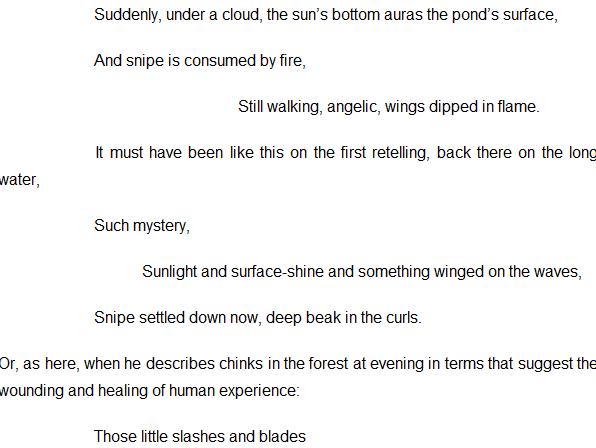 Or, as here, when he describes chinks in the forest at evening in terms that suggest the wounding and healing of human experience: 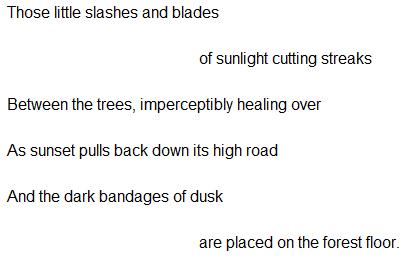 At one point in Littlefoot, Wright says simply, “At seventy, it’s always evening.” Even if this poem of the October-to-October year in which he turned seventy does not show him at his most coherent or consistently inspired, it does show that as his career reaches its evening, he can still, sometimes, do what great artists so often do. By describing their wounds so well, they offer us healing. And by describing their sense of mortality so well, they help us to face our own.[/private]