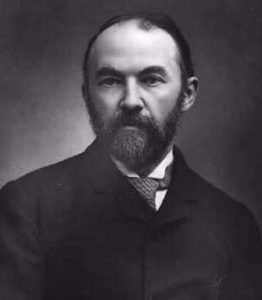 How can you account for the love you have for a favorite poem?  One way is simply to say that it sparks personal associations for you. For me, that’s true in the case of “Neutral Tones,” as I suspect it is for the many who regard it as one their favorite Hardy poems. After all, it vividly recounts that moment in a relationship when lovers become aware that they’re only prolonging its inevitable end. Since such experiences are apt to occur in the formative period of late adolescence, they’re apt to stick with you.

Indeed, the poem has those memorably melancholic phrases that can so haunt a lovelorn freshman pacing a campus on an early winter’s day: “alive enough to have strength to die,” “chidden of God,” “God-curst sun.” Yet its rueful undertone also has great appeal for those further along in life. Four decades after I first read it, having outgrown my bittersweet associations, I find a basically unchanged but far richer poem.

Now, as then, it seems suffused with that grim atmosphere so instantly recognizable as Hardyesque – a quality so palpable in poem after poem that it seems to exist above and beyond the poems themselves.  In his lyric poetry especially, it always seems to be a damp, gray day. Two ill-fated lovers are locked, or were locked, or will be locked (sometimes all three) in a death struggle with love. Time is passing them by. There is something in the nature of the situation that will not allow it to be otherwise. And so on.

For me, “Neutral Tones” is a perfect embodiment of that atmosphere. Yet many of his other poems occupy the same emotional territory much less successfully. The difference, I think, has a great deal to do with the poet’s ability to meld meter with emotion in more or less supple ways.  In With the Grain, Donald Davie observes that in many of Hardy’s ungainly moments, one can sense the hand of an engineer laboring too hard on the machinery. The rhymes can be heavy-handed, the words forced to fit the prosody. Take, for instance, a stanza from one of his most famous and affecting poems, “The Voice”:

Or is it only the breeze, in its listlessness
Travelling across the wet mead to me here,
You being ever dissolved to wan wistlessness,
Heard no more again far or near?

I wince at “wistlessness” even though I know that it’s a revision of the far clumsier “existlessness” — and yet the poem delivers. Or take “The Burghers,” which before it tiresomely proceeds in the form of a generic revenge ballad, emits a radiant image of damnation characteristic of Hardy at his strongest:  “The level flare raked pane and pediment/And my wrecked face….”

The punishing setting sun, foretelling a kind of hell, echoes that colder sun — white, “as though chidden of God” — a few pages earlier in Wessex Poems. In “Neutral Tones,” however, craft grapples with emotion in a much livelier way – elaborating upon it, complicating it, intensifying it.  Deceptively simple in its skeleton, as Victorian students of prosody tended to call the abstract structure of a poem, “Neutral Tones” consists of four quatrains, each with three tetrameter lines and a final trimeter line that rhyme abba, cddc, etc.

Beyond the counted number of accents per line, however, its meter is an irregular combination of iambs and anapests, its rhythm an expressive alternation between speed and significant deceleration. “We stood by a pond that winter day,” it begins, with the anapest “by a pond” slowing down the quicker iambs that surround it.

In the second line, two final anapests stress the sense of cosmic reprimand: “And the sun was white, as though chidden of God.” The densely packed alliteration and assonance intensify what the rhythm signifies. The “mind of winter,” in Wallace Stevens’ phrase, grows more severe when the beat stops at “white” and then, after two lightly stressed syllables, lands upon “chidden.”  The word “hidden,” only barely buried in the chattering of “chidden,” carries the suggestion that the form of chiding God has chosen for the sun is to strip it of its color and heat. This is, of course, seen by the speaker, whose love has grown similarly colorless.

In the second stanza, we encounter the speaker’s own sphinxlike hiddenness: “Your eyes on me were as eyes that rove/over tedious riddles solved years ago.” Hardy revised “solved” to “of” after the 1898 edition, removing the consolation that such riddles might ever be solved. The rhythm of the line suggests an impatient passing of time, like the drumming of fingers on a table. The beat falls heavily on “tedious,” stressing the ennui and contracting the word to two syllables – “teed-yous – as if to speed the empty moments along.

In the next two lines, the poet first evokes an extended moment of playful possibility for the lovers — “And some words played between us to and fro” — only to crush it in the ungainly compression of “On which lost the more by our love.” Buried in portentous obscurity – its gnarled syntax has confounded many readers — the line ultimately may mean no more than “Our love was diminished all the more by the play of words between us.” (To be sure – and perhaps testifying to the opacity of the line – there has been considerable debate about its meaning. John Bayley, in An Essay on Hardy, and others read it to mean “some words played between us as to which of us lost the more by our love…”)

In the next quatrain, however, we find “Alive enough to have strength to die.”  One of the most memorable uses of the oxymoron in English poetry, the phrase embodies the ghostly vitality of the entire poem. Using conventional scansion, we can count it as an anapest (“to have strength”) anchored between two initial iambs and a final iamb. But we can also measure it in the spirit of dipody, a theory of prosody in which Hardy was deeply engrossed.

In Hardy’s Metres and Victorian Prosody, Dennis Taylor brilliantly elucidates the theory. Developed by Hardy’s friend Coventry Patmore, the dipodic principle reveals “how the metrical line can be capable of enormous, though not unlimited flexibility,” Taylor writes, “not only in variations of a metrical norm, but in the same line’s susceptibility to different metrical norms.” In practice, dipody means that instead of scanning poetic feet individually, readers can count each two feet as one, thereby enabling them to compare the relative strength of stresses over a wider range of syllables.

The stressed syllables of two adjacent iambs could thus be measured against each other, rather than merely against preceding unstressed syllables. In the line “And a few leaves lay on the starving sod,” for example, while “few” and “sod” are clearly stressed, they are much less so than “lay” (largely because it immediately precedes a caesura) and “starving” (mainly because it is a longer word than “sod).

Similarly, if we look at the first two iambs of “alive enough to have strength to die” we see that while the second syllable of “enough” is indeed stressed, it’s clearly a weaker stress than the “live” in “alive”—and can thus be seen to emphasize the vitality of its stronger neighbor.  Put “alive” together with “to have strength,” and you get an extreme weight placed on the idea of the strength to go on living. But weigh that against the final iamb, which ends on the most conclusive of words (“die”) and you get a formidable standoff: “Alive enough to have strength to die.” (Note also the balance implied by the placement of “alive” at the beginning of the line and “die” at the end.)

In the final stanza, the poem’s speaker reflects that although the scene is buried in the past, its truth has remained with him.  Since then, in the neutral tones of a more objective light, he has learned certain lessons about the faithlessness and wrongness of love, and those lessons have placed the poem’s prior scenes in the context of the tragic nature of things. That view of life may well underpin Hardy’s sensibility. Yet the strength and flexibility with which his artistry engages with his characteristic atmosphere keeps poems like “Neutral Tones” alive for us.

David M. Katz's second book of verse, Claims of Home, Poems 1984-2010 , was published in 2011 by Dos Madres Press. His poems have appeared in Poetry, The New Criterion, The Paris Review, The New Republic, Shenandoah, The Notre Dame Review and will appear in PN Review and The Raintown Review. His first book, The Warrior in the Forest, , was published by House of Keys in 1982.
View all posts by David M. Katz →
Bookmark the permalink.