To get a sense of the bleak and illusionless intelligence that animates Joshua Mehigan’s poetry, the best place to start is the title poem of his first collection, The Optimist. Optimism, of the quiet, bourgeois, cheerfully resigned variety, is something contemporary poetry hardly needs more of. Reassurance, minor epiphanies, the solace of everyday things—these are some of our most popular poets’ most popular subjects.

But Mehigan’s optimist, we soon discover, is a woman dying of cancer: “Touch burned out first, then vision.” And where another poet would play this death for bathos, or for the bittersweet resignation that is a slightly disguised form of bathos, Mehigan makes it yield a genuinely astringent recognition. This is not simply that we are all destined to die—a truism we evade so regularly that no poem can bring it home to us—but rather that death exposes the hollowness of all our desires. The dying woman’s last request, to pick out the dress she will be buried in, is presented not as a brave assertion of personality in the face of oblivion, but as a reflexive operation of will, as helpless as the jerks and twitches of the hanged man:[private]

She wasn’t making light. It seemed to her
that cancer just rehearsed life’s attitude
that one’s desires must taper to a point
which has position, but no magnitude.

The poet who can wrest this insight from such a subject is in no danger of “making light,” in any sense of the phrase. If there is a light in Mehigan’s poetry, it is the sober lucidity that shows things simply as they are. Indeed, the more cheerful a poem’s title in The Optimist, the more certain it is to betray its promise of happiness. “Progress” turns out to be a poem about nothingness, both cosmic and existential: “in truth nothing was in him, around him, / substantial, pervasive, and all of that— / even atomic.” “Merrily” seems to invoke “merrily we roll along,” but its epigraph from Donne describes a very different kind of journey: “from the womb to the grave we are never thoroughly awake.” In this parable of life as a river-voyage, Mehigan insists that we are not pilots of our destinies, merely their cargo: “As if to steer, / I drop a hand in. Oh well. Anyhow, / the scenery is mesmerizing here.”

If Mehigan’s understanding of life is consistently dark, however, it is not insistently so. He does not complain, argue, or preach about the state of affairs his poems reveal: in fleeing from optimism, he does not end up a pessimist. Rather, the terse eloquence of his formal poetry seems to constrain him to direct, accurate observation. (Or, rather, his instinct for directness and accuracy leads him to form, whose artifice is, paradoxically, the best way to avoid rhetoric.) The quietness of Mehigan’s poetry is made possible by a genuine formal mastery, rare for any poet today, and doubly impressive in a first collection.

For an example of how rhythm can express a poem’s meaning even more effectively than words, look at “A Questionable Mother,” about a woman who has murdered her child. This ripped-from-the-tabloids subject might seem too garish for poetry, or at least to demand an equivalent garishness in its treatment, such as Frank Bidart brings to his tales of serial killers and madmen. Mehigan, on the other hand, enforces an extraordinary atmosphere of hopelessness simply through a series of pentameter lines, each dragging to a halt on a weak syllable:

Here thought of murder weren’t that uncommon.
Nakedness was uncovered by the hour.
Within, the suspect cried they must believe her.
The female officer behind a window
of thick green glass typed slowly without stopping.

It is typical of Mehigan to show the crime not in the overwhelming instant of its commission, but in the bleary, routine aftermath. Life, too, goes on “slowly without stopping”: that is the truth Mehigan always returns to, and which makes his sadness convincingly unmelodramatic.

This complex of formal, tonal, and philosophical gifts makes Mehigan akin to Robert Frost, and at least one poem in The Optimist seems a deliberate response to a famous Frost poem. Just as Frost, in “Out, Out—,” sternly elides the moment of the boy’s death—”Little, less, nothing!—and that ended it”—so Mehigan, in “The Spectacle,” relegates a couple’s death by fire to a line break:

They slept a moment more but didn’t wake
until the gas was on them like a tongue,
and then they were asleep again.

The chilling kindness of the euphemism is also Frostian, as is the concluding turn away from the victim to the ambiguous survivors: “the firemen said, ‘Stand back, please. . . please stand back . . .” Yet despite the similarities “The Spectacle” does not read like a pastiche of Frost. Rather, it is Mehigan’s expression, in his own idiom, of a similar experience with the world.

Nor is that experience conveyed only in the extremes discussed here—murder, disease, accidental death. It is equally present in Mehigan’s wrenching poems about family life, whether he writes from the point of view of the child, as in “After a Nightmare,” or the father, as in “Runaway Daughter,” or the husband, as in “The Tyrant.” There is more insight into domestic grief in these and other poems in The Optimist than in a dozen louder, more overtly confessional books. And that sense of insight born from experience is what makes Mehigan’s work so moving and impressive. Few American poets, old or young, seem to know so much.

The first poem in A.E. Stallings’ new collection, Hapax, suggests that Elizabeth Bishop plays the same tutelary role in her witty, intelligent poems that Frost does in Mehigan’s. “Aftershocks” employs a famous rhyme from “One Art,”—master, vaster, disaster—and invokes “cartography,” the favorite subject of the author of “The Map” and Geography III. At the very least, the situation of the lovers in “Aftershocks”—who find to their surprise that “We are not in the same place after all,” who ask “have we always stood on shaky ground?”—suggests that Stallings, like Bishop, is a poet who approaches the world warily. She has a coolly ironic sense of the way things fall, not dramatically apart, but unsettlingly askew—the way, as she puts it in “The Dollhouse,” “lives accrue, / With interest, the smallest things we do.”

The most appealing of Stallings’ gifts is her sense of play, though she is not a ludic poet, if that word suggests the attention-grabbing somersaults of a Paul Muldoon. Rather, her delight in the artificiality of language —the way it can be coaxed into rhymes and patterns—is adult, decorous, even slightly aloof. The pun in those lines from “The Dollhouse,” drawing out the double meaning of “interest,” is highly characteristic; it bespeaks a poet who pays as strict attention to her words as to her thoughts, and who finds both kinds of attention a source of pleasure. That is why verbal conceits abound in Hapax. At a funeral, “silence sounds its deafening report”; a poem titled “Thyme” is also, inevitably about time. “Minutes” compares the passing moments, with their easily refused demands on our attention, to beggars, and then works out the metaphor with Metaphysical thoroughness: 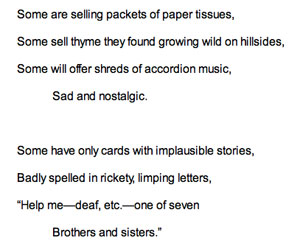 Stallings’s ideal reader would be able to recognize the Sapphic stanza she employs here, since the Greek classics are her favorite subject and resource. (The book’s title, Hapax, is the Greek word for “once.”) She comes by this interest honestly—she is an American expatriate in Athens— but drawing on Greek myth for emotional resonance is a perilous tactic, and she does not always avoid its pitfalls. Temperamentally, in fact, she seems drawn to a certain classicist’s donnishness, as in her long series of limericks about gods and heroes (“Arachne, Athena beside her, / Let her ego grow wider and wider”), which would not be out of place in a senior common room.

But Stallings deserves praise for avoiding the misuse of the classics that is much more usual today, in poets from Ted Hughes to Louise Glück: treating them as a ready-made storehouse of tremulous, Gothic intensity. Stallings’s scrupulous intelligence never serves her better than in her powerfully understated approach to myth, as in “Asphodel,” a poem about the flowers of hell: “I noticed a strange fragrance. It was sweet, / Like honey—but with hints of rotting meat.” Such precise imagination allows her to do justice to the real foreignness of ancient Greece, and provides some of the most memorable images in Hapax: a dead dog “touching noses / Once, twice, three times, with unleashed Cerberus”; the “needling milk teeth” of Actaeon’s hounds, who will grow up to devour him; Persephone who “weeps kerosene / And wipes it on her sleeve.” Stallings herself describes this technique—the poet guiding herself through the unknown by holding fast to the concrete—in “Explaining an Affinity for Bats”: “Who find their way by calling into darkness / To hear their voice bounce off the shape of things.”

But the most intriguing direction that Hapax opens up for the future of Stallings’ poetry lies in more personal subjects. Her poems about love, sex, and heartbreak have that rare combination of emotion and reason, sweetness and sourness, that used to be called worldly-wise. If few poets sound this way anymore, it is because few recognize, as Stallings does, that feeling is more poetically effective when mastered by form and irony. When Stallings writes about shattering emotion, as in “Fragment,” she does not use “I” even once, preferring to give herself wholly over to the metaphor of a dropped glass:

In the matter-of-factness of that last line, we seem to hear Stallings’s true note—as we do in the miniature drama of disconnection in “Failure,” and the compressed history of a love affair in “Flying Colors: Flags of Convenience.” It is a note that already makes Stallings one of the best younger poets, and that promises to grow even stronger in the work that lies ahead.[/private]