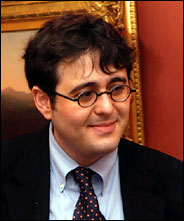 I read Burning Wyclif, Thom Satterlee’s debut collection, because it was recommended to me by a friend, without knowing anything about the book or the poet. If I had been told in advance that it is an extended sequence of poems about the life of John Wyclif, the fourteenth-century English theologian who is considered a forerunner of Protestantism, I don’t know if I would have been eager to make the attempt. Generally speaking, when a contemporary poet builds his or her work around a obscure figure out of intellectual history, there is reason to be dubious. Think of the way Anne Carson endows her modish, attitudinizing poems with a spurious scholarly glamour, by associating the names of Simonides or Sappho with verse whose actual inspiration is Gertrude Stein; or the way Jorie Graham creates the illusion of metaphysical depth by interlarding her own text with chunks of Heidegger and Wittgenstein. In these poets, and in the many poets inspired by them, the past is not so much inspiration as decoration, a trove of intellectual status symbols to be plundered at will.[private]

Even poets who make a more serious use of ancient myths and symbols tend to want the past to meet them more than halfway. Frank Bidart, in his book Desire, used the Greek myth of Myrrha—a tale of father-daughter incest—to explore the same kind of psychosexual terror he already found in twentieth-century ghouls like the murderer Herbert White and the anorexic Ellen West. Putting new wine in old bottles is better than shattering the bottles, but it brings us no closer to an authentic experience of the past. Few periods have been less interested than our own in escaping the provincialism of the present; despite all our reflexive praise of the Other and otherness, we are shy of history, which is the greatest otherness of all.

What makes Burning Wyclif such an exciting book is precisely its quietness, which is the quietness of a poet trying to forget himself. The form of the book is loosely biographical: Satterlee imagines a series of episodes from Wyclif’s life, beginning with his boyhood and ending with the posthumous immolation that the Catholic Church inflicted on his heretical corpse. Along the way we see Wyclif struggling to master Aristotelian philosophy, as a student at Oxford; receiving ordination as a Catholic priest; fighting off the temptation of lust, thanks to a young widow who lives across the road; and working on his English translation of the Latin Bible, the achievement for which he is best known.

Described this way, it might seem that Burning Wyclif is merely versified scholarship. In fact, Satterlee has done something more difficult even than mastering a historical period. As episode follows episode, it becomes clear that what we are actually reading is devotional poetry—a series of Christian meditations, in which the figure of Wyclif is used to explore the mysteries of faith. This is hagiography in the original sense—not empty praise, but writing about a holy person that helps us to share in his holiness. And it succeeds because Satterlee is careful not to let the saint obscure the man—a danger he writes about in the book’s opening poem, “Habitus”:

The fitting took all day. He tried on
Son and Friend, Scholar, Reformer,
Heretic; he slipped into Priest,
wore also Doctor Evangelicus
and Morning Star. Some robes
hung too loosely; others pinched his neck.

In the end, he had to wear them all
and learn the sadness of being a word—
only one surface to show the world
while he lived underneath the layers
and listened for the barely audible
sound of his own heart beating.

Satterlee knows that it is impossible to give a convincing picture of saintliness, in a secular and psychological age, without making that human heartbeat audible. This does not mean that he zeroes in on Wyclif’s frailties, or supplies him with a suppositious wound to match his bow. But Satterlee helps us believe in Wyclif the saint by showing us Wyclif the student, in “Wintertime in Oxford,” walking through the cold “with Aristotle / pressed to one ear, Augustine / to the other—medieval muffs . . . .” It is a comic, touching image, and also a suggestive one. For the voices of Augustine and Aristotle did echo in Wyclif’s ears, and we can’t enter into the medieval Christian worldview without some knowledge of those thinkers—not just abstract knowledge of their doctrines, but an inward sense of how Wyclif experienced them.

Satterlee, in other words, has to teach us lost ways of thinking about the world and God, if we are to appreciate either Wyclif or the poems Satterlee wants to write about Wyclif. We join the young theologian in mastering Aristotle’s categories (in “Wyclif Places Himself, His Room Within the Ten Categories of Essential Being”); we are made to feel the allure of self-flagellation (in “Brethren of the Cross: Oxford, May 18, 1349”); we are immersed in medieval iconography, in a remarkable poem that imitates the shape of a triptych. That is one of several poems which experiment with the layout of words on a page. Another, “On Angels,” brings home the old scholastic quandary about angels dancing on the head of a pin by literally shrinking itself down to a point. (These visual arrangements, reminiscent of Renaissance picture-poems, are generally more successful than Satterlee’s attempts at traditional form. His villanelles and sonnets are a little awkward, and feel ill-at-ease among their free verse neighbors.)

Satterlee’s resurrection of a lost vocabulary of thought and feeling is what allows Burning Wyclif, in its best moments, to achieve a genuinely religious power, reminiscent of George Herbert. No contemporary poet I know has captured the challenge of faith better than Satterlee does in “Ordination,” where we see Wyclif receiving the sign of the cross on his brow:

There the bishop builds
the cross, two beams linked
in the place of the skull.

Of all the miracles
Wyclif ever believed,
none taxed him more

than to find himself
still standing with all that weight
on his forehead
as the bishop moved away.

Satterlee’s understated imagery transforms the ordinand’s head into Golgotha, the Hill of Skulls, and the bishop’s gesture into the beams of the Cross. The weight of this mystery bears down on Wyclif’s head, in a beautiful image of submission, and a subtle foreshadowing of Wyclif’s own posthumous martyrdom. That bizarre punishment—the heretic’s body was dug up in order to be burned, forty-two years after he died—is the subject of the title poem, which concludes with Satterlee’s observation that “no one even thought the word martyr.” It is a beautiful reminder of the absurdity and the mystery of martyrdom, which is a gift that the oppressor thoughtlessly bestows on his victim. Religious reflection of this order is very rarely found in contemporary poetry. One might not even have thought it was still possible, until Thom Satterlee achieved it—a sure sign of a true poet.

In a perfect world, Rachel Wetzsteon would be one of the most popular poets of her generation. You would see people in the outdoor cafes along Upper Broadway reading copies of Sakura Park, her third collection, the way pilgrims to Greenwich Village carry Scott Fitzgerald or Edna St. Vincent Millay. For Wetzsteon’s poems manage to turn Morningside Heights—a quiet, bourgeois neighborhood near Columbia University, home to the park of her title—into a theater of romance, an intellectual haven, a flaneur’s paradise. Her poems evoke the kind of life that generations of young people have come to New York to live—earnest, glamorous, and passionate, full of sex and articulate suffering:

The pastry shop’s abuzz
with crazy George and filthy graffiti,
but the peacocks are strutting across the way
and the sumptuous cathedral gives
the open-air banter a reason to deepen:
build structures inside the mind, it tells
the languorous talkers, to rival the ones outside!

In a period when New York has happily given itself over to getting and spending—when being young in the big city is a kind of package-tour, affordable only to neophyte lawyers and bankers—it is heartening to see Wetzsteon affirm the city’s true glamour. Wetzsteon can write convincingly about glamour, that perilous muse, because she knows that it is not superficial, a matter of how you dress or who you know. It is, rather, one of those “structures inside the mind,” a way of seeing yourself and your surroundings as charged with mysterious significance. To be really glamorous, Wetzsteon convinces us, you need the self-awareness that comes with intelligence: “Romantics, so far gone / they think their lovers live for wisdom, woo / by growing wiser,” she writes in the comic poem “Love and Work.”

Wetzsteon can sound a bit like Dorothy Parker when, in the same poem, she complains:

There is an inner motor known as lust
that makes a man of learning walk a mile
to gratify his raging senses, while
the woman he can talk to gathers dust.

But while Sakura Park draws inspiration from Parker’s brand of tough-talking, quick-witted femininity—and from savvy screwball heroines like Irene Dunne, whose performance in The Awful Truth (1937) Wetzsteon invokes—the reader is always aware that this is just one of the roles Wetzsteon likes to watch herself play. Her sensibility is equally informed by Baudelaire, the prince of flaneurs, and Kierkegaard, the prince of ironists, both of whose names appear in the text. Like them, she perversely prefers suffering to happiness, because suffering leads to self-consciousness:

Looking down at the city below,
I am almost grateful that when I said
I have met my soul my soul said no;
it was a verdict that nearly bled

the hope from my veins, but it got me thinking.

Many of the poems in Sakura Park are about unhappy love affairs, and perfectly capture the arc of emotions from flirtation to passion to remorse. (“Little Song for a Big Night,” one of the best poems in the book, covers that whole trajectory in five stanzas.) But Wetzsteon always returns to the conviction that it is “thinking” that matters, more than feeling—a conviction that is, perhaps, a prerequisite for being a poet. She makes this clear in just three lines, from the sequence “Flaneur Haiku”:

Lovers holding hands:
a sign of sharpened senses
or stupefaction?

Wetzsteon’s poems are odes to sharpened senses, to possibilities held open, and to the city whose own sharp openness seems like a standing invitation. The spell of Sakura Park, woven from Wetzsteon’s intelligence and lyric deftness, has already become, for me, a part of New York’s magic.[/private]