New from Roof Books (the New York house that brought us L+A+N+G+U+A+G+E magazine, and books by its prominent practitioners including Charles Bernstein, Ray DiPalma, Hank Lazer, Jackson MacLow and Ron Silliman), Lissa Wolsak’s Pen Chants feels like it’s ushering in a new day of sorts for the Language school. Long (and undeservedly) derided as being unreadable, inconsequential or nonsensical, Language had austere beginnings–challenging the politicized and standardized “meanings” of words–but perhaps did slip into the wrong hands somewhere along the way. Enter “experimental” poetry, a consistently mediocre style written not by, or in the spirit of, the old Language guard of radical thinkers, but by grad students and bored homebodies who seem to have figured if Bernstein can string six, two-word sentences together and call it a “poem,” why can’t I? Maybe this is a harsh generalization; but how else to explain the explosion, particularly online, of this kind of writing–obtuse, personal moments that do not translate at all into public experience, fueled by nothing but the writer’s love of razzle-dazzle?[private]

Wolsak’s book, her second, might actually herald a moment of Language re-thinking. The brakes have been put on, and the dessication of Language/experimental/Avant poetry in America has slowed. Why? Because the landscape this poet crafts–one both Beat and Classic (contrasts between Ginsberg-like “fuck puny fiction, pornocracy, / and pandit classes” and the Mallarmé-ian “I am mostly silence… distaff / but it is not so / as I have heard from ****”), Hejinian and Dickinson (“elliptical hand / in mock hand / draw close to me / belly-bitten grasses, / shadow-milks, / my fallen twin whose / fork lies incused in my hair”)–is not only mantic and wonderfully rhythmic, but also quite cohesive for a work of its kind. The demands of the audience that looks for a new apparatus with which to explore human experience meshes with the demands of the audience that requires a tangible experience.

These moments crash to the surface of Wolsak’s long, 70-page poem–or song, to be more accurate. Here is experimentation where the emotional, the visceral, is not eschewed or excluded; lesser Language poetry (and, to be sure, who can really say what is or is not Language poetry any more?) seems a vacuum, void of the sugary and sticky, seeking instead to be a dry cracker whose bland taste cries “Theory!” Not so with Wolsak, who shouts early on that “at stake is / inescapable speech” in “a culture tired…of its narratives.”
What ensues is a journey through the not-quite physical, not-quite mental landscape; perhaps it is the landscape of meditation, of retreat into the “suspensi spiritus,” the instant before thought is morphed into sound (or, as the poet writes, the instant when silence is “spoken [into] mysteries”). Each moment becomes in essence a note in a grand suite: 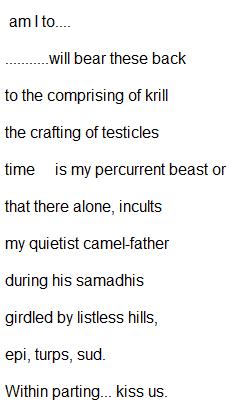 Pen Chants is splendid departures strung together with the best narrative thread of all–music. Music of the searcher, one whose soul is restless, a “rose [in the] unlisted meanings of space.” Wolsak defines for us the space she sees with the language she sees fit, whether it fits with convention or not. Thus in Pen Chants the experimental spirit is re-invigorated, no longer victim of the lapidary or mandarin lapses seen in some of that mode’s recent work. Wolsak gestures for us, wants us, to follow her, in order that we may “conquer the depths.”[/private]