“Is That Really the Best You Can Do?” Quincy Lehr on Poetry and Personal Style 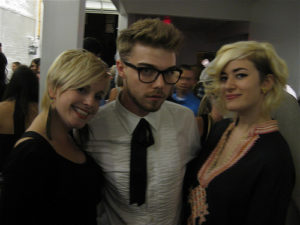 When Solon declared that he learned something new every day (or was it Pericles?—some dead Greek guy, at any rate), he perhaps was not thinking of the utility of the Pratt-Shelby Knot when trying to keep a leather tie proportional enough that the thin end does not emerge at an inconvenient and insistent angle. However, after futzing around with the Windsor and half-Windsor (which rather vitiate the point of wearing a leather tie, don’t they?), I am quite convinced I’m right. I make no apologies for that.

The tediously ubiquitous Seth Abramson recently wrote in an essay on corruption in poetry that: “If you spend even 10% of the energy you spend on your writing on efforts to be a hipster in dress or manner or behavior or social proclivities, you may be a tiny bit corrupted.” And sure, everybody hates a hipster, but one suspects that Abramson, who still looks like the defense attorney he once was, means something else. That is, he means that excessive attention to one’s own appearance, social manners, and activities will distort one’s artistic output. This may well be true if one is the sort of little conformist shit who clogs the pipes of the poetry system in the U.S., but in such a case, the problem isn’t the ten percent of one’s energy that one spends adjusting one’s narrow-brimmed pork pie hat to exactly the right angle—the distressing thing is the ninety percent spent on poetry.

If Balzac is right that clothes “are the most tremendous modification social man has experienced,” then far from it being a question of dead time better spent cranking out the verse, one’s sartorial proclivities are important indeed. There is an amiability to Richard Wilbur’s ugly sweaters that is somehow the same amiability that suffuses his poetry, whereas there is a rumpled elegance in both Mark Strand’s verse and in his wrinkled white suit. They would be hard to mistake for anyone else (though Wilbur has a depressing number of imitators in the middle-to-upper echelons of New Formalism), not only in the way they write, but in the way they look and the way they act. Sadly, the same does not hold true for most contemporary poets. Indeed, there are some broad types, each of whom tends to be associated with certain kinds of verse.

One of the most depressing things about poetry is that it seems to attract preps to a far greater degree than most of the arts, though I suspect orchestral music may come close. You know the sorts—the “classic” American tailoring in the khakis and blazers (which unless you have linebacker shoulders or a huge case of being… well… huge, make it look like you’re wearing the collected sails of the Spanish Armada), the knit sweaters, the non-distressed, preternaturally tidy trousers, etc. And with the women, an older version of that girl in Advanced English II with the brown hair pulled back in a ponytail who’d never talk to you. (Okay, I imagine Chelsea Rathburn would have spoken to me in high school, but I wouldn’t have liked her tone.) Indeed, the prettier female examples can provoke some rather pathetic drooling and awkward jump-start conversations at poetry conferences.

And much as it happens in the Homo Prepiens species more generally, one gets a fair bit of gender demarcation. The women work their way through the Loeb Classics, interspersed with slightly saccharine words of thirtyish wisdom about… you know… relationships and feelings and shit. (All of this being naturally foul-protected as “women’s poetry,” even though it frequently reflects and perhaps even reinforces traditional gender roles.) As for the guys… Oh, you hated them in high school, and you hate them now. It’s either smug cleverness or slightly embarrassing earnestness, more typically the former, though the latter is often filtered through a gauze of WASP nostalgia. It’s bad enough when W. S. Merwin writes about Martha’s Vineyard. For the under-fifty crowd, it should be punishable by death.

As for the hipster dipsters, oh please. Anyone with a mustache that stupid has no right to be in the arts in any capacity whatsoever, and the sartorial gimmickry of depressing po-mo pastiche finds a mirror in the verse. Any resident of Williamsburg, Clinton Hill, or Fort Greene here in Brooklyn knows the type of poet I mean, the sort who looks like a walking advertisement for American Apparel and writes poems with titles like “Godzilla Battles the California Raisins.” If you don’t know what I mean, wander into readings at the Union Pacific on Fourth Avenue or Pete’s Candy Store on Lorimer. You’ll probably not have heard of the poets in question—they tend to be legends among the recent graduates of the Sarah Lawrence, Columbia, New School, and NYU MFA programs more than the general public. There are often flashes of brilliance in phrases and images, but, as is the way with hipster culture, they get buried in the worst kind of affectation—the “I don’t give a fuck, but I do, but you can’t know that, so I’ll make sure that I do whatever I do shittily” sort.

The end result is poetry that sounds like Michael Robbins knock-off—and Robbins (who’s based in Chicago, but same difference in this case) has the look down, though his receding hairline does ruin the effect somewhat. But look at his picture on the Poetry Foundation web site. The stubbly near-beard, the wink-nudge Slayer t-shirt (an indie band would be too obvious, see; metal is less cool and therefore more cool, if you follow), the glasses with thick, shitty frames, and the “retro” headphones around his neck—he has it all. May God have mercy on his soul. Oh, and his debut collection (named after a poem of his in The New Yorker) is Alien vs. Predator.

One could go on—the blah suburbanites and slubbish shapeless crowd, that thugged-out slam shouter, etc., but the point is that predictability in costume and verse too often march in tandem. An artist should craft one’s art from every fiber of one’s being, so why in the name of flame-broiled Jesus on a Kaiser roll would one coat that being in stereotyped, uninspired dress? The insistence that life imitate art is not an escape—it is a polemic against the homogenized late capitalist banality that surrounds us. Granted, there can be a certain pathetic holdover from the Counterculture of the 1960s and 1970s, and while Jorie Graham looking a bit like Judy Collins’s nightmare of herself may in fact say something, I’m pretty sure I’d as soon not listen.

Of course, the Godmother of Suburban Hausfrau Ennui, Oprah Winfrey—whose forays into poetry publishing and promotion remind us that our art’s waning popularity has its upside— has stepped into the breach. The March 8, 2011 issue of Oprah Magazine featured “rising poets” saying ridiculous things about poetry (even while looking quite female and photogenic). Here’s the bit on slam poet Suheir Hammad:

The author of Breaking Poems, and an original cast member of Russell Simmons Presents Def Poetry Jam on Broadway, Hammad writes about “how people maintain their humanity in difficult circumstances.” She likes her clothes to tell a story, too: “I don’t always look the way people expect a poet to look. Onstage, you’ll find me in sequins.” For spring, a to-the-ankle skirt and sweeping chiffon duster make for a dramatic entrance. “Materials and shape interest me,” Hammad says. “There are no rules—just, ‘How am I going to make this work?'”

In the interests of “keeping it real,” one should note Hammad is pictured in a duster, flowing skirt, and dress that cost $582—never mind her shoes and accessories. Sarah Lawrence professor Rachel Eliza Griffiths is pictured in clothing worth in excess of $5,000. While the whole thing was a somewhat hokier (if more subdued) version of runway stereotype, it nevertheless indicated that one can be a poet and look good rather convincingly—even if, well, some of the outfits were a bit fucktarded and, as David Orr remarked in The New York Times (March 25, 2011), some of the models “are rising poets mostly in the ‘I get up in the morning’ sense.”

Despite this, though, and despite Winfrey’s magazine’s generally ham-handed handling of poetry (contrary to fashion’s generally ludic nature, much of the remainder of the poetry coverage focused on poetry’s putative moral and psychological benefits—YAWN!!!), its pairing of poetry and fashion was nevertheless by no means without merit. One is no less an artist for wearing good clothes—and $582 is not that much money where dressing up is concerned. (At the time of writing, I’m wearing $735 worth of clothing—which does, however, include shoes, underwear, etc.) But look, if you’re not an MBA poet like John Barr or Dana Gioia, money probably is a bit of an object for you, and besides you’re not an Enemy of the People, so why dress like you want that job laying off people in the Midwest in order to nudge stocks up by half a point?

Why is this even controversial? It’s probably rather deeply rooted in our culture. In the first place, there’s that tripe one hears from less responsible school teachers and workshop leaders about how “everyone is a poet” if they can only be inspired enough (“O Captain! My Captain!”). The concomitant is that if everyone is a poet, then everybody looks like everybody, and looking too different is a mark of… elitism perhaps. That people like me make hopeless accountants and operatic tenors never seems to even the equation in this argument. Moreover, many of those in this country who have touted the “general reader” and the “general audience,” in some ways a more sophisticated version of this argument, are hardly egalitarian in their politics.

The hipster thing superficially seems different. After all, there are jokes about hipsters, and the style (broadly construed) is associated with cosmopolitan urban areas—particularly fashionable neighborhoods within them. But again, the exaggerated nonchalance, the hyperbolized insouciance, and the reliance on pop arcana, along with the affected nonchalance, at least gesture toward a putative egalitarianism. (And to be fair, even if hipster left-liberalism at times has a knee-jerk quality, it would be wrong to necessarily dismiss it as a mere prop.)

But in both cases, the objection is not to actual differentiation of the poet from the rest of the population, but to the explicit acknowledgment of that differentiation. Thus, a seeming unconcern with fashion becomes, itself, an ideological statement. Go onto the Eratosphere po-board and see the number of times that members reference the West Chester Poetry Conference’s “laid-back” atmosphere to see what I mean. The not-too-implicit assumption is that preening, peacockish behavior is somehow illegitimate, that while artists tend to be monstrously egotistical, they should act as if they aren’t.

So how to fix this? Briefly, if you’re a poet, looking the part might be a good idea. I’ll restrict my comments to the males of the species, not so much because I think that these questions are unimportant for women as that I suspect that if I say anything concrete on that score, certain ex-girlfriends will hunt me down. So, a few pointers:

Quincy R. Lehr's poems and criticism have been published in numerous venues in the U.S., UK, Ireland, Australia, and the Czech Republic. His first book, Across the Grid of Streets, appeared in 2008, and his second, Obscure Classics of English Progressive Rock, is due out soon. He is the associate editor of The Raintown Review, and he lives, inevitably, in Brooklyn.
View all posts by Quincy Lehr →
Bookmark the permalink.