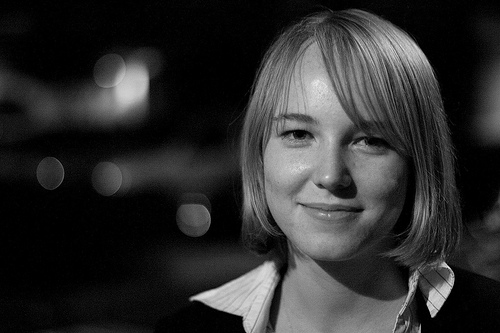 In Ashley Anna McHugh’s “All Other Ground Is Sinking Sand” (“On Christ the solid rock I stand” goes the previous line of the hymn this title is taken from), a villanelle addressed to the speaker’s father, we find ourselves at the ailing father’s bedside and learn that he has a bedsore that has turned gangrenous:

Doctors say that he could die: They have to hurry,

and my father cries, he prays—but this is a hard story:

Staph spreads, and surgeons treat his body like a quarry.

Close to his spine, they mine the green-black ore—

and still, he prays. I can’t—but this is my father’s story.

Here, at the end of the poem, we see McHugh’s command of form in full force. When I say form, I don’t only mean the metrical framework (in this case, predominantly hexameter, uncommon in English-language villanelles) or the repeating pattern of the villanelle; I also mean McHugh’s masterful variations of syntax, punctuation, even typography, all of which enable this poem, whose idea is already emotionally fraught, to achieve a level of emotional impact that would be impossible in the hands of a poet of lesser ability.

In this short poem (five tercets and a quatrain), there are six colons, one semicolon, and three em dashes. As is evident in the above excerpt, the use of these “hard” punctuation marks, in addition to all the periods, allows the poem to progress in uncertain fits and starts, in staccato time. This effect increases at the close of the poem so that in the last line alone we encounter three periods and three commas. What’s more, the initial repeating line of the poem—which, in McHugh’s oh-so-slight variation on the dictates of the villanelle form, serves as the closing line of the poem rather than the penultimate—began as a complete phrase from the King James version of what is commonly called “The Lord’s Prayer,” unimpeded by punctuation: “Thine be the kingdom and the power and the glory.” As the poem progresses, it gets shortened first to “Thine the power, and the glory,” and then finally it is expanded again, but rhythmically chopped even further into fragments: “So, Thine be the kingdom. Thine, the power. Thine, the glory.” Here, where the speaker has adopted the father’s prayer as her own despite her lack of faith, the italics have disappeared. This is no longer merely a quotation—from the Bible, from the speaker’s father—but the prayer has become, somehow, paradoxically, her own. McHugh has given us a powerful, compact exploration of faith’s link to love, of the way devotion leads to devotion—devotion to her father moving the speaker toward the divine.

I should also note McHugh’s remarkable ability to make metaphor, as when “the surgeons treat his body like a quarry.” Too many poets would be content with having found an interesting rhyme (phew!) that also provided an interesting metaphor and would have moved on. But McHugh senses how artificial that would feel in the context of this story, and so the metaphor is extended and explored through the next line, so that the aptness of the comparison becomes more clear: “Close to his spine, they mine the green-black ore.” This metaphor not only conveys a sense of the father becoming an inanimate object upon which the doctors act (one effect of medical terminology, perhaps, and more literally embodied in surgery under anesthesia), but the metaphor also conveys the idea of value—a mine for precious ore.

In this poem we see the technical strengths that are everywhere evident in McHugh’s first book as well as her primary thematic concerns: a conflicted exploration of her religious upbringing and meditations on intimate relationships, both familial and romantic. McHugh achieves admirable tonal variety in these poems, though one difficulty that results from this variety is that in the first section humorous, relatively frivolous lyrics sit uneasily beside poems about dying loved ones and the suicidal. Between “Ashes on Assateague Island,” with such lines as

And now the nurses ease

I send you through the fire.

and “Song for the Suicidal,” where we read,

Where the hooded man crouched, rocking.

Where the pale boys shuffled cards.

She wore a numbered band.

come several poems, including “From His Coy Mistress,” a response to Marvell’s famous poem, ending with these lines:

Rolling our strength and sweetness to a ball

So gentlemen, fill me in: If there’s not time

for decent sex, how’s coyness such a crime?

This is a wonderful bit of tongue-in-cheek, but the placement in the collection makes the wit at work seem mere comic relief and diminishes the effect of both the humorous and the grave poems in the section.

The central sequence of the collection, “Cairns,” a 17-part poem in rhyming pentameter, tells the story of a man, Jake, remembering a hiking trip with his now-dead father through West Virginia land where old explosives left by the military have been marked with cairns (heaps of rocks). The catalyst of Jake’s memory is lilac petals swarming in a pre-storm wind:

Maybe he can let the past be past

if the lilacs settle, still their frantic stir?

These petals frame the sequence. By the time they reappear in the last section of the poem, we have learned much about Jake’s relationship with his father and the way the volatility of the explosives encountered on their hike has come to symbolize that relationship for Jake. Here is section XIII:

He’d tripped, and then he felt the cairn divide.

Three rocks. Cairn as warning, not a guide.

Bright shell. Nothing was hurt, and nothing died.

He knew this should have been enough of luck.

It wasn’t. His father unfolded maps, and wrote

the landmarks, guessed the distance to the road.

Rebuilt the cairn. They hiked on east, their route

Cairns as warnings, as guides: across the river,

when hard-packed trail gave way to brush, or over

rock fields—. At every cairn, his heart would shiver.

Then: Tree-line. Fist of wind. Air thin. Then: Dark.

He closed his eyes. Shell after shell. He thought

his father gasped back there, but maybe not.

The sequence moves back and forth in time, painting scenes at home, on the trail, at the hospital, and finally one in which Jake is building a cairn as a memorial to his father, the wind blowing through it:

No cairn will answer it: No trail. No shell.

nothing to fear—but wind

whinnies its cracks, and so it howls, sings sharp:

it names itself with the song of an empty sign….

The sections of “Cairns” are placed solidly at the center of this book, forming, if you will, a cairn of words that does justice to the character’s own attempt to understand and memorialize his father.

The final section of the collection, like the first, assembles poems on the themes of love, death, and religion. One of the most effective poems of this section, “Hunting Accident,” recalls the first poem of the book, which warns, “Beware the favor of God,” and tells the story of the speaker’s father dying in a fall from a tree-stand, praying for mercy before he died, receiving Job’s response from God:

Half-buried by leaves, he prayed

From deep in that whirlwind,

to the hoarfrost of heaven?

And from whose womb did the ice come forth?

“Hunting Accident” seems to be about the same incident, but interestingly it shifts halfway through to focus on a shot deer from the past:

Again, we see McHugh’s formal acuity at work. The caesuras imposed by whitespace work marvelously well here, lending the force of breath stopped then released to the word “shot” and providing suggestions of multiple connotations for the phrases “like a cradle. Becoming” and “meat is so simple.”

The complexities of the relationships and ideas in Into These Knots are served well by the precision and ingenuity of McHugh’s formal techniques. This is an extraordinary debut marked by aesthetic and emotional effects achieved through formal mastery, and we can look forward eagerly to McHugh’s future books.

Luke Hankins is Senior Editor at Asheville Poetry Review, where he has been on staff since 2006. His first book of poems, Weak Devotions, is forthcoming from Wipf & Stock Publishers in late 2011. A chapbook of his translations of French poems by Stella Vinitchi Radulescu was published by Q Avenue Press in 2011. His poetry, prose, and translation have appeared in American Literary Review, New England Review, Poetry East, Southern Poetry Review, and The Writer’s Chronicle, among other places. He regularly posts book reviews, interviews, and other commentary at his blog, A Way of Happening (http://awayofhappening.blogspot.com).
View all posts by Luke Hankins →
Bookmark the permalink.