The Lighter Side: Happy Anniversary, AWP! 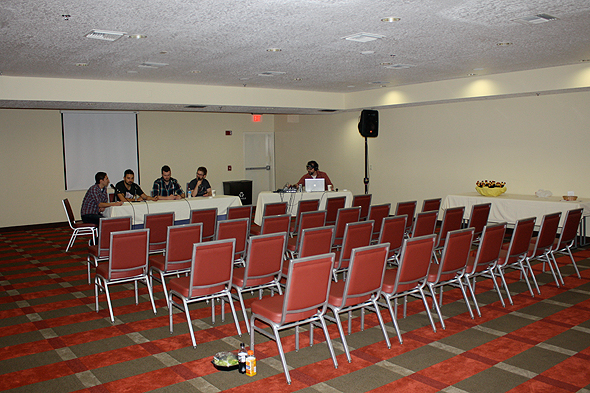 (Here’s a salute to Creative Writing programs from our poets and critics, past and present, culled from various interviews and essays.)

“Abolish the M.F.A.! What a ringing slogan for a new Cato: Iowa delenda est!” – Donald Hall

“We are now at the point where writing programs are poisoning, and in turn we are being poisoned by, departments and institutions on which we have fastened them…” – R. V. Cassill (the founder of AWP, in his address to the convention at its 15th anniversary)

“The Creative Writing experiment is now a generation old. It has been thoroughly tested and explored in every conceivable way and has proved, in my opinion, a colossal failure. Commons sense dictates that it should be abandoned.” – Karl Shapiro

“A few good poets will be able to use them [creative writing programs] to gain time and leisure to write, but one must assume that they would have found some other way to write if necessary. For the rest, the effect is to enlist a poor or moderately talented writer into a fashionable style, and encourage the production of mediocre, inauthentic work. To the extent that this becomes a flood and sweeps away the genuine, the MFA system is actively destructive to poetry as an art.”– Adam Kirsch

“In principle, there is no reason that writing programs should be bad for American poetry. The proliferation of music programs in the U.S. has helped raise the standard of orchestral playing and broadened the access to classical music. But, for a variety of reasons, the growth of graduate writing programs has had some unfortunate effects on both American poetry and poetry criticism.” – Dana Gioia

“. . . the exponential expansion of creative writing programs in recent decades—and the introduction of creative writing in some schools as an undergraduate major—has been terrible for literature and education. The only beneficiaries now are the deans and provosts who get promotions for developing these programs and the not-always-distinguished writers who administer and teach in them. Unlike musicians, writers do not usually mature early. To write richly and well, they need to know something about the world and about ideas. And while students may profit from taking a creative writing class among their other courses, they need to learn about subjects like history, political science, and astronomy. They need to read great writers of the past and present. And it is counter-productive to encourage them to take multiple workshops in which their own apprentice exercises are the principal texts they study.” – Timothy Steele

Tagged  “Abolish the M.F.A.! What a ringing slogan for a new Cato: Iowa delenda est!” – Donald Hall.
Bookmark the permalink.