The Voice of the Poet Part 3: Sylvia Plath 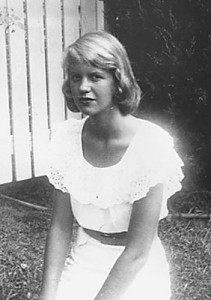 Few twentieth-century poets in English have achieved such lofty heights of fame or been surrounded by such cumbrous shrouds of legend as Sylvia Plath. Alongside Allen Ginsberg, she is the best-known American poet since the Second World War, earning through her death the fame that Ginsberg gained only over decades of very public and flamboyant life, much of which reduced him to a shaggy icon of the hippie moment. Plath’s fame has, lamentably, allowed as much sarcastic detraction as undiscerning devotion to accumulate around her glaring and difficult reputation. Attitudes toward her life and art (taken by many to be inextricably bound together) tend to fall into one of two camps. The first holds that her death was a necessary final act in the literary Passion play of a woman’s escape from a world of persecution and limits, exemplified by Robert Lowell’s presumption that the last poems were her “appalling and triumphant fulfillment” (she herself declared in the poem “Edge” that “The woman is perfected. / Her dead // Body wears the smile of accomplishment”).

The other camp is one of dismissive chauvinism, endeavoring half-heartedly to corrupt her reputation with imputations that she was marginally-talented, conceited, pampered, and would have been profoundly unhappy whatever her circumstances. It is likely that the truth of her life-which may be less mythical and more workaday than we might at first appreciate-allows for all of these allegations and much more as well. In Woody Allen’s film Annie Hall, Annie’s Alvy Singer remarks on seeing a copy of Ariel that he is amazed that Plath’s tragic death could be construed in some schoolgirl way as romantic. Her distressed life and horrifying death, as much as her poetry, have been wielded as weapons of gender politics. With the passing-away of her often vilified husband, Ted Hughes, who spent much of his life as Poet Laureate of England, one should hope that a more balanced account of her career may evolve (Hughes’s mediocre book of poems about his time with Sylvia, Birthday Letters, was an instant bestseller in 1998, answering few questions about their relationship but raising the question of whether a book of poetry should appear on the fiction or non-fiction columns of the New York Times Best Seller List; in the cases of Ted Hughes and Sylvia Plath, it could well be on both).

Plath died young, at 31, and her poetry was uneven, her progress difficult to chart. She was up till then the author of one competent but unremarkable book of poems, Colossus, and the gushing autobiographical novel The Bell Jar, under the pseudonym Victoria Lucas (it would go on to attain cult status alongside other such adolescent classics as Catcher in the Rye and On the Road). Her best poems appeared only after her death. Her literary aspirations were apparent from a young age, and as a teenager she had already begun publishing both poetry and fiction. Her earlier poems buckle under the heft of modernist imitation and fail to support sophisticated critique; the voices of W. B. Yeats, Wallace Stevens, and even T. S. Eliot echo throughout. It seems likely that as a younger woman she viewed herself as part of a line of well bred, in some ways aristocratic female poets, such as Marianne Moore, whom Plath interviewed for Mademoiselle in 1953.

Poet and editor Peter Davison, with whom she had a brief summer love affair, is not alone in suggesting that she viewed other women poets in her generation largely as rivals rather than members of a revolutionary sorority, and she was fiercely jealous of the early success of Adrienne Rich, who won the Yale Younger Poets Series at the age of twenty-one; the men did not matter as much to her, except as conduits to publication and prizes. It is also alleged (and disputed) that she suffocated creatively under the intellectual sway of Hughes, a man of dominating charisma and commanding intellect, who diverted her reading away from poetry and toward anthropology and myth. Hughes, also standing in the long shadow of W. B. Yeats, engaged with her in occult exercises intended to release the creative power of the subconscious. There is no doubt that he exerted considerable influence on her in many ways, at least at the start of their relationship. It is only when she broke with him, sexually and poetically, that she became the strikingly original poet that she did. While attending Cambridge University on a Fulbright Scholarship, she first encountered Hughes, already a known and respected young poet, at what we would now call a “launch” party for a literary magazine. Legend has it that they were immediately magnetized to each other and began passionately kissing in a closet where she bit Hughes’s cheek open, drawing blood and the unwelcome attention of his then-current girlfriend. A scan of the surviving diaries from the early portion of their marriage will reveal that the two were happy for some if not most of the time they spent together, even if finances were a bit tight, as they are for writers at any age. However, contentment and art are not always peaceful bedfellows, and this is nowhere so apparent as in these recordings.

The first half are taken from a recording made on April 18th, 1958, with Hughes beside her, watching over her, as it were. The poems are excruciatingly formal, in both construction and performance. Listeners might find it hard to believe that the affected English accent and prim delivery of “November Graveyard” arrives from the same throat that would later unleash the terrifying “Lady Lazarus.” A comparison of the two poems on the page (or screen, in this case) will highlight this distinction:

This gives way, in a mere four years, to these harrowing tercets:

I have done it again.
One year in every ten
I manage it-

A sort of walking miracle, my skin
Bright as a Nazi lampshade,
My right foot

A paperweight,
My face a featureless, fine
Jew linen.

Peel off the napkin
O my enemy.
Do I terrify?-

The nose, the eye pits, the full set of teeth?
The sour breath
Will vanish in a day.

Soon, soon the flesh
The grave cave ate will be
At home on me

And I a smiling woman.
I am only thirty.
And like the cat I have nine times to die.

This is Number Three.
What a trash
To annihilate each decade.

This poem is part of the later group. It was recorded on October 30th, 1962, three days after her thirtieth birthday and not long after she separated from Hughes, who proceeded to slip away with a mistress to Spain, leaving Plath alone with their two children. Gone are the finishing-school pretensions. It is here one finds the most famous of her works, including “Fever 103°,” “The Applicant,” “Ariel,” “A Birthday Present,” and what is perhaps her best-known poem, the infamous, thumping “Daddy.” It must be said that “Daddy,” after a few dozen readings on the page, can seem a bit contrived and even insincere (she has been loudly criticized for her appropriation of Holocaust imagery, which has been regarded as a cynical and superficial means to express private grief); but upon hearing her read it, one is inspired to grab onto the chair or whatever solid surface presents itself. It is exhilarating and agitating. Its syncopated rhythms swell and amplify the increasingly desperate rage that is radiated and exhaled by the speaker of the poem toward her “Daddy,” who is the incarnation of various basically pernicious characters: the overbearing and later deserting Ted Hughes, her father Otto Plath (a highly regarded biology professor at Boston university), a despotic Waffen SS Panzer commander, a parasitical vampire, and a ghoulish, unidentified husband who stands in for the original Daddy after he dies.

What is perhaps her most famous line appears in this poem: “Every woman adores a Fascist.” The boundaries between autobiography and poetry seem to be demolished, but they are only smudged, even if violently so. The numbers do not add up. The years do not tally, and the facts, insofar as anything in the poem can be called a fact, are fuzzy. Of course this vicious blurring is also a blotting out of a private reality that has become too harsh to bear, and it sustains rather than dilutes the emotional force of the poem. Importantly, it is in these later recordings that her own soaring anger obliterates the imperial casing in which she seems trapped during the earlier readings. This is scary stuff.

Her first book of poems, Colossus, exposes her awkward use of words culled from the well-thumbed thesaurus that Hughes described her clinging to and perchance overusing in her early career. After reading Robert Lowell’s confessional poems in Life Studies and meeting Anne Sexton, Plath gradually acquired the ability to express her own personal anguish in her poetry. Literary historians are fond of abundantly demiurgical years in a poet’s career, particularly the last years before an untimely death, such as those of John Keats (who died at 25) and Wilfred Owen (who died in battle at 27). Plath composed an astounding twenty-six poems in the single month after her separation from Hughes. In many ways she was the best of what have been called the confessional poets, balancing her classical erudition with a passionate sensibility, and she, along with Sexton, inaugurated an era of American poetry that is still with us. Just as she once fell under the sway of Hughes and Stevens, young poets today, both men and women, are easily pulled under by the dark currents of her Ariel poems, and those waters are deeper than they at first appear.

The winter of 1963 was the coldest in London since 1813, when a very different breed of poet strode through the narrow streets bundled up against the wet chill. Plath had taken up residence with her two children in an apartment formerly rented by W. B. Yeats. She would rise in the frozen predawn darkness to work on her poems before the children woke. She was frequently ill with fever and most likely overmedicated. On February 11th of that miserable winter, she left food out for her children and laid her head into the oven. She also left a note with instructions to call her doctor. The gas fumes seeped down the stairs and lulled downstairs neighbor Trevor Thomas to sleep until the next day, when he awoke, realized what had happened, and called for an ambulance. Alvarez later expressed the opinion, in his landmark book, The Savage God, that Plath hadn’t intended to kill herself but rather be found and saved, thus compelling Hughes to return to her.

No one can know, but it seems from her own writings on suicide, and particularly on her earlier attempts, that she meant to die. Years later, Sexton, who had discussed her own suicide attempts with Plath, wrote in “Wanting to Die” that “suicides have a special language. / Like carpenters they want to know which tools. / They never ask why build.” The poems she left behind at her death were collected to form the book Ariel, certainly one of the best books of American poetry ever written, and one that will no doubt weather the storms of controversy and exploitation that her tragic and abridged life have inspired.