The Voice of the Poet Part 4: Elizabeth Bishop 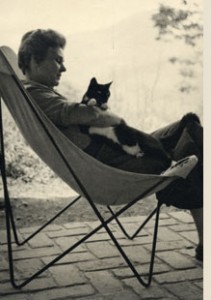 In 1962, as CIA analysts stood over grainy photographs of what they believed to be Russian missile bases in Cuba, Elizabeth Bishop wrote in her poem ‘Sandpiper’ of the sea receding, where “(no detail too small) the Atlantic drains / rapidly backwards and downwards.” This passage, the falling away of detail into experience, and, above all, the belief that no detail is too small to be of significance, is emblematic of the focused energies to be found in her poetry. This is her great strength, that while the world waited on the brink of war, she could use the human concern for detail to create works of art rather than political hostility (one might recall Allen Ginsberg’s poem from The Fall of America that begins with the invaluable lines “If Hanson Baldwin got a bullet in his brain, outrage? / If President Johnson got a bullet in his brain, fast Karma?”).

Unquestionably one of the most important American poets of the century, Bishop’s poetics is one distinguished by tranquil observation, craft-like accuracy, care for the small things of the world, a miniaturist’s discretion and attention. Unlike the pert and woolly poetry that came to dominate American literature by the second half of her life, her poems are balanced like Alexander Calder mobiles, turning so subtly as to seem almost still at first, every element, every weight of meaning and song, poised flawlessly against the next. Eliminating virtually any trace of her private life from the poems, she exhibits a flexible grasp of poetic impression, without abandoning herself to impressionistic forays. Alongside her intimate friend, Robert Lowell, Elizabeth Bishop was responsible in some part for the enormous shift in lyrical sensibilities that took place in American poetry at the middle of the twentieth century. Bishop left behind a large number of excellent recordings despite her overwhelming reluctance to read or record her own poetry. The twenty-three poems available as part of Voice of the Poet make up nearly a quarter of the total of eighty-seven poems she published during her lifetime, in four collections, each roughly a decade apart. The resemblance to Philip Larkin’s publishing career is apparent. Like Larkin, a generation younger and an ocean away, Bishop’s productivity seems out of all proportion to her influence, which is vast even if her Collected Poems is not. Poets of very different stripes and styles continue with equal confidence to declare Bishop a principal influence, and this demonstrates that she was situated upon a fault-line that she herself helped to create, responsible in part for what the critic Helen Vendler once termed the “breaking of style” (Vendler had Gerard Manley Hopkins in mind at the time), a sundering (however refined) that is seen and heard by a great many over great distances in greatly different ways.

Although she was convinced by Lowell to make several recordings for the Library of Congress, she generally refused requests to tape her readings on the grounds that she, like so many, disliked the sound of her own voice. She requested that her literary executor, Alice Methfessel, enforce this silence after her death, though Methfessel has since yielded to relentless public appeals for a commercial release of the composer, so to speak, performing her own works. The early recordings are slightly marred by the mistakes that most often afflict young poets; she rushes nervously through some of the poems, tripping over the rhythms rather than allowing them to move naturally. Her later recordings, in contrast, portray the rather lackadaisical turn she took in years that followed. J.D. McClatchy suggests that she was, to a point, “bemused by her own lines.”

Elizabeth Bishop was born in 1911, in Worcester, Massachusetts. Her father died before she was a year old, and her mother was committed to an asylum when Elizabeth was only four years old (she would never see her mother again). While themes of insanity and the “madhouse” resonate repeatedly through the works of Sylvia Plath and Anne Sexton, they remain rare in Bishop’s (though as late as 1957 she published the litany ‘Visits to St. Elizabeths’, the asylum, where, incidentally, Ezra Pound daily pontificated on the great lawn to doctoral students, right-wing radicals, and assorted paranoid literary cranks). With what money was left her by her family, Bishop moved to New York’s West Village and later traveled to Europe and South America.

While her male contemporaries, from family man Randall Jarrell to model bohemian Dylan Thomas, sought a life of reading tours, official posts, and cocktail parties, she chose to remove herself from such aspects of the literary life, preferring quiet regions populated by ordinary people performing mundane tasks (though she lived in both Key West and Brazil at different times, James Merrill once spoke of her “instinctive, modest, life-long impersonation of an ordinary woman”). It is in these places, as observer, that she gained her greatest insights into the human condition.

While her settings may shift between bustling Manhattan streets and craggy New England coasts, thematic attention tends to be dedicated to places where labor is being performed. Whether farms, fishing villages, or factories, the ebb and flow of industry come to form a symbolic extension of the human drive to coordinate, discern, and finally regulate the world. Where there is the grime of work there is also the trace of energy and therefore hope, whether at the filling station or the fish houses, the bight or Varick Street (where the factories once “struggled awake” at mid-century and where now one schleps out to heave canvases and stereos in and out of storage), work goes on and the world is constructed in its midst, in the motion provided by these impulses toward action. These are the places where “the crumbing ribs of marl protrude and glare / and the boats are dry, the pilings dry as matches,” where the “untidy activity continues, awful but cheerful.” (By her request, “Awful but Cheerful” is carved on her gravestone in Worcester.) She once said that writing poetry “is a way of life, not a matter of testifying but of experiencing. It is not the way in which one goes about interpreting the world, but the very process of sensing it.” Among the many qualities that have contributed to her greatness is her simultaneously ocular and phonic precision when describing a scene busy with otherwise insignificant detail:

The five fish houses have steeply peaked roofs
And narrow, cleated gangplanks slant up
To storerooms in the gables
For the wheelbarrows to be pushed up and down on.
All is silver: the heavy surface of the sea,
Swelling slowly as if considering spilling over,
Is opaque, but the silver of the benches,
The lobster pots, and masts, scattered
Among the wild jagged rocks,
Is of an apparent translucence
Like the small old buildings with an emerald moss
Growing on their shoreward walls.

It is not surprising to learn that she would work on a single poem for years, even a decade, and felt it had to be absolutely perfect before she could publish it (more prolific authors, such as D. H. Lawrence or Allen Ginsberg, while gaining greater political and public laurels, have little hope of leaving behind a literary reputation as impeccable as Bishop’s; for every Women in Love there is unavoidably a Kangaroo,for every ‘Death to Van Gogh’s Ear’, a hundred disappointments like ‘Mind Breaths’).

If Anne Sexton is the Siren of the dark psyche, Adrienne Rich the Pilot of political speculation, Jorie Graham the Valkyrie of philosophical investigation, Bishop is surely the elder Sybil of everyday human life, wandering the waste lands, as it were, and revealing her wise art only to those who actively seek it out. For those who continue to seek her art and lifework, these recordings are nothing less than essential.