The Voice of the Poet Part 6: James Merrill 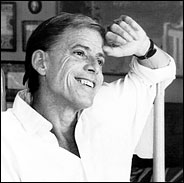 James Merrill is usually imagined as a genteel lyric poet who lived a genteel lyrical life, engaged by purely domestic concerns, whether in New England or Greece, while turning out some of the most balanced and swiftly canonical American poems of the century. He is also thought of as a poet who willingly removed himself, for the most part, from the political and social discord that marked many of the decades of that same century. As with most abbreviated portrayals, this is at once inaccurate and a bit too much to the point. Although not attracted to the political stage, Merrill’s life and works are important more for their inward development, their internal contrary energies, than any imagined civic obligation they might fulfill. Where Robert Lowell and Robert Bly felt quite at ease at the great podium of American politics, Merrill was cut from very different cloth. He believed that the foremost problem with “political or social writing is that when the tide of feeling goes out, the language begins to stink.” In this he was correct, and, in exchanging a bit of democratic contemporary appeal for a more ample vision, it is likely that he guaranteed himself a lasting place in the history of American letters.

While he is most often extolled as the preeminent lyric poet of his generation, he also devoted great efforts to the difficult epic form with Divine Comedies (1976), Mirabell: Books of Number (1978), and Scripts for the Pageant (1980), which were all three combined to form (with added coda) his mammoth occult work, Changing Light at Sandover (1982). It seems incredible that the author of such delicate early works, memorable principally for their surface qualities, would go on to write not only poems of extraordinary interior strength but a grand poem of such magnificent scope and breadth as Sandover. Just as music-from Wagner to Boulez-often finds its way into the poems as either theme or emblem, the poems themselves are ultimately an elegant music that perpetually harmonizes itself (clever populist Robert Pinsky would doubtless sign over his right arm to have penned ‘The Victor Dog’).

Merrill’s private life was propelled into the public eye at the sensitive age of thirteen, when his father (then the most famous financier in the nation, co-founder of Merrill Lynch) and mother divorced. Headlines of the New York Times described the young Merrill as a “pawn” in his parents’ lamentable struggle. Though he lived (J.D. McClatchy suggests “survived”) a privileged childhood, it would be irresponsible to attribute the balanced aristocratic qualities of his poems to his monetary security and rarefied social milieu alone. As a poet he possessed great gifts despite, not because of, his ethereal environment. Beyond this, it should be clear in our post-Marxian age that attempts to disentangle the high arts of any era from the moneyed classes is doomed to miscarriage of one sort or another.

Merrill is an exemplar of one of Wordsworth’s famed dictums that poetry is thought recollected in tranquility, and he leaves many traces in his poems of enigma or chaotic experience that is to be reassembled. Merrill himself once remarked that “we don’t know what we feel until we see it distanced by [. . .] translation.” He restates this in ‘Another August’ as “Years past-blind, tattering / wind, hail, tears-my head was in those clouds / that now are dark pearl in my head.” In the Parnassus of major modern American poetry, his is the most intimately formal; as with the giants of European poetry in the past four centuries, his shrewd formalism is scarcely detectable to the reader, and, if it becomes apparent, it does so as do the thematic designs of a Josquin Desprez motet or the intricate marble work of a Donatello saint.

The recordings begin with ‘The Black Swan’, an early poem on a subject familiar to readers of English poetry. The swan has proven one of the more stable standards of poetic discourse (a young Oxford student once described how his father made him sit silently for an hour watching a swan in order to get to the heart of a Yeats poem), and it serves the young Merrill’s appetite for raw symbolic potential. ‘Voices from the Other World’, while auguring Merrill’s later immersion in the epic occult, recalls T. S. Eliot’s exploration of the symbolic power of the supernatural more than a generation before with his Madam Sosostris, “famous clairvoyante,” and drowned Phoenician sailor of The Waste Land. Though the verses themselves, from the compact ‘A Renewal’ to the highly cadenced ‘Three Chores’, are closely mannered and delicately rhymed, Merrill’s enunciation in the early recordings from the forties and fifties, though musically exact, could hardly be less pretentious. The poems from the middle of his career, the sixties and seventies, seem more gilt, but in a stern, sweeping, classical way rather than an ornamental, baroque one. It is in this period that he crossed into the too-often ostentatious and tawdry realm of the confessionalist. Yet, even once succumbed to the confessional disposition so popular at the time, he retained a certain poise and sense of ceremony that set his poems apart (‘The Emerald’ is an excellent example of this). He created what are unmistakably crafted works of art that will no doubt survive the oblivion of lesser confessional poems of the era. From this point, his work matured and acquired an emotional complexity derived from a mingling of reminiscence and longing.

‘Days of 1964′ surely stands out as one of the better love poems composed by an American this century, with its moving descriptions of intimate circumstances and its oscillating rhythms:

Where I hid my face, your touch, quick merciful,
Blindfolded me. A god breathed from my lips.
If that was illusion, I wanted it to last long;
To dwell, for its daily pittance, with us there,
Cleaning and watering, sighing with love or pain.

Comparisons to a waltz are here difficult to avoid. In fact, much as a conductor will alter the smallest element of a piece of music to great effect when performed, Merrill’s is an art that evolved. Nowhere is this more clearly in evidence than in the recordings, where a single phrase or word is transmuted into another with equal rhythmic value but more precise meaning: “A sudden beam” on the page becomes “A sudden gleam” on the tongue.

The centerpiece of the recordings is ‘Lost in Translation’, best known for its extended metaphorical development, setting the gradual construction of an exotic jigsaw puzzle against the art of translation. The variegated stanza forms and flexible, alliterative word play allow the reader (or listener in this case) to enter a multiform region of sensation sought and knowledge gained.

Then Sky alone is left, a hundred blue
Fragments in revolution, with no clue
To where a Niche will open. Quite a task,
Putting together Heaven, yet we do.

An array of fragments resolves to perfect form, as that which was broken is mended in memory. There is more, though. There is that which is lost in perfection. Just as the wild possibilities presented by the scattered jigsaw pieces disappear as the last one is set into place, certain subtleties (thus certain beauties) are inevitably lost in translation; and, as the boy must relinquish some of the scattered puzzle’s wonder, the translator must also learn to let go of some part of an original language.

Merrill’s later poems display masterful wit, the age-old poetic fixture so meticulously deployed by the metaphysical poets, but Merrill’s is more a means of emotional expression than skillful evasion; it comes across as charming without seeming facile or effete.

Lives of the Great Composers make it sound
Too much like cooking: “Sore beset,
He put his heart’s blood into that quintet . . .”

These instances are meant to raise a chuckle or, failing that, an eyebrow in the audience, but they do not detract from the poem. Never given to overly effulgent readings, his voice comes across as weary and a bit more detached in the later poems, but the vigor of the poems, so finely crafted, carries through.

If his poems appear to be so symmetrically ornate as to be almost grotesque in an era that was dominated by shabby, self-indulgent, and often irresponsibly political poems, they may be saved by this same fact. Merrill once posed the question “think what one has to do to get a mass audience. I’d rather have one perfect reader. Why dynamite the pond in order to catch that single silver carp?” Indeed, history has revealed repeatedly that the work of art most likely to find Merrill’s “one perfect reader” is the most durable and the most appreciated in ages that follow. May these splendid recordings go in hand with the poems themselves on that long dangerous passage.