The Voice of the Poet Part 7: Five American Women Poets 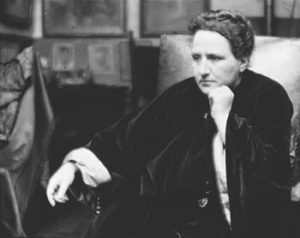 Gertrude Stein is the odd woman out in this collection, her fame owing as it does to a broad array of achievements. As an experimentalist, adjudicator, patroness, and novelist, we observe a pivotal figure in modernist art and Parisian bohemian stirrings in the first half of the century, but perhaps unavoidably, the poetry seems a lesser fixture of this ambitious life work. Her writings have remained undervalued to the present for two reasons. The first is that outside of select graduate seminars, usually devoted to gender rather than poetic craft, she has grown unfashionable over the past few decades.[private] Those with whom she is most often associated are not trendy at the moment: John Dos Passos, Ernest Hemingway, even Picasso (who has attained the status of a Beethoven, universally revered but no longer anyone’s favorite player). The second reason is the sheer (one must admit overwhelming) volume of her work. A would-be student of her oeuvre must face that her central works alone include Three Lives, The Making of Americans, Matisse, Picasso and Gertrude Stein, Tender Buttons, Useful Knowledge, Geography and Plays, Composition as Explanation, An Acquaintance with Description, Lucy Church Amiably, How To Write, Before the Flowers of Friendship Faded Friendship Faded, Operas and Plays, The Autobiography of Alice B. Toklas, Portraits and Prayers, Lectures in America, Narration, The Geographical History of America or the Relation of Human Nature to the Human Mind, What are Master-pieces, Everybody’s Autobiography, Picasso, The World is Round, Paris France, Ida, A Novel, Wars I Have Seen, and Brewsie and Willie. In addition to this, Yale has produced eight enormous volumes of her unpublished work; the possible student has by now switched majors to garbology or even proctology, anything that requires less rummaging and probing.

Stein charges through a long sequence of poems recorded in January 1935 at Columbia University, upon her return to the states after thirty years in Europe to attend a performance of Four Saints in Three Acts, the Virgil Thompson opera for which she had written the libretto (though he had to discard over two thirds of it and rewrite what remained). She rushes as though the recording were nothing more than an act of archival drudgery. She leaves no silence between lines or even discreet pieces. Perhaps this impersonal, even machine-like reading tactic is perfectly suited to her philologically self-conscious and psychologically affective style. Her poems approach musico-poetic transcendence. She establishes a sensation, a rhythm, rather than a stage for philosophical inquiry or emotional vent, resembling more the thumping repetition of a trance DJ than the delicate flux of a mid-century jazz combo.

These poems mimic the visual textures and patterning of post-cubist painters, many of who would have been familiar to Stein’s drawing room on the rue de Fleurus. By her own admission, she envisioned a breach with the linearity that had defined most of Western art up to the twentieth century. She sought a “continuous present”, and in this she was hardly alone. She was, however, one of the few women engaging in such language experiments in English. Her writing owes a great deal more to the painters and sculptors than to the writers of the era, and she worked in what we call broad strokes. She approached her project with the grand sense of purpose we associate with the bolder modernists, from her fellow American Ezra Pound to the Italian playboy Filippo Tommaso Marinetti, both of whom dashed off manifestos that resemble in tone Stein’s remark that “Paris was the place that suited us who were to create the twentieth century art and literature.”  In his famously ambitious Harvard commencement speech defending the “New Art,” e.e. cummings described Stein’s “logic of literary sound-painting carried to its extreme.”

From the bullish, domineering Stein the recordings move on to H.D., Hilda Doolittle, whom Pound considered too “demure.” Her poems are chiseled and cool with sea wind and sand, embracing the classical gods and heroes despite the Imagist determination to avoid such inherited ornamentation. Having fallen in love with Ezra Pound while he was at the University of Pennsylvania (she was up the road at Bryn Mawr), she later moved to London to be near him. Pound, with his gift for manufacturing seemingly historical events, sent a group of Doolittle’s poems to Harriet Monroe’s Poetry magazine in Chicago on which he scribbled that they were from the mysterious poet “H.D., Imagiste.” The initials remained with her from then on, and the Imagist movement had its first publication.

The selection that appears in these recordings is from her last major work, Helen in Egypt, an account of Helen and Achilles through the voice of the Greek lyric poet Stesichorus (her Helen is transposed to Egypt from Greece; Helen of Troy is a phantom, the Trojan War an illusion created by jealous gods). The recordings were made in Switzerland between September and November 1955 (a full six years before the book itself would appear). Doolittle sounds remarkably frail at times (she was 69 years old at the time), but this only adds to the rapturous distress conveyed by the poem. She had experienced her share of romantic difficulty, having married an unfaithful Richard Aldington and leaving him, while pregnant with his child, for the writer Winifred Ellerman, known to his readers as Bryher; Helen’s Egypt can reasonably understood as Doolittle’s Switzerland. Her reading becomes more effective as it builds, leaving the listener with a spooky sense of loss and anguish by the end:

why did he let me go?
did he hear the whirr of wings,
did he feel the invisible host
surrounding and helping me?
was he afraid of the dead?

Edna St. Vincent Millay enjoyed the status of a best-selling poet in the 1920s, when her slim volumes could be found in every genteel home in the nation (Huntsman, What Quarry sold 60,000 copies in its first month in 1939, respectable sales even by today’s outrageous best-seller standards). She was the first woman to receive the Pulitzer Prize, then in its seventh year. She was thought of as a very “feminine” poet, and this drew as much criticism as devotion. It inspired some very ill-considered comments; in fact it is difficult to determine which sounds less considered, John Crowe Ransom’s assertion that she displayed a womanly “indifference to intellectuality” or the series editor’s remark that she was the “Sylvia Plath of the 1920s.” She enjoyed herself, to be certain, after moving to the West Village; she was a regular at the right parties and had numerous affairs (including one with Edmund Wilson). Later in life, through depressed and regularly drinking to excess, she actively protested the execution of Sacco and Vanzetti and the German “annexation” of Czechoslovakia before penning extravagantly patriotic poems to commemorate the American invasion of Fortress Europe on D-Day.

She reads her poems, as if about to break into song, straining to contain some great joy. The final recorded poem, “Recuerdo,” is perhaps her best-known poem (barring the brief poem “My candle burns at both ends; / It will not last the night; / But ah, my foes, and oh, my friends- / It gives a lovely light”). She brings a soft youthfulness to the undated recording of the poem:

We were very tired, we were very merry-
We had gone back and forth all night on the ferry.
And you ate an apple, and I ate a pear,
From a dozen of each we had bought somewhere;
And the sky went wan, and the wind came cold,
And the sun rose dripping, a bucketful of gold.

Louise Bogan—who has been described as a poet’s poet, whose work W. H. Auden described as drawing “beauty and truth out of dark places”—lived a tumultuous life (allowing for certain exceptions, a surprising number of pre-MFA-era poets in the twentieth century seem to have lived unpredictable and, it must be said, exciting lives in the Byronic tradition). After marrying young and losing her husband young (he died at 32), she moved to New York City and supported her daughter by working as a librarian. She married the wealthy (and largely forgotten) poet and novelist Raymond Holder. A litany of “poetic” events followed: her house burned down taking with it her manuscripts; she suffered two nervous breakdowns; a divorce from Holden; a turbulent affair with the poet Theodore Roethke. After this, however, her life settled. She served as the New Yorker‘s poetry editor for thirty-eight years and won nearly every major prize available to a poet in the United States. Her recordings are the clearest of the five assembled here. Her voice is very even, controlled; her poems advance and resolve effortlessly. She places very little emphasis and brings no dramatic flair to the readings. This allows the reader to experience a more crystalline expression of the poems as they exist on the page rather than lifted off of it:

The glass does not dissolve;
Like walls the mirrors stand;
The printed page gives back
Words by another hand.
And your infatuate eye
Meets not itself below:
Strangers lie in your arms
As I lie now.

The recordings end with Muriel Rukeyser, a woman as often associated with feminism as literature. She wrote generously outside of the poetry world, publishing a novel, plays, film scripts, translations, children’s books, and three biographies (she was also a prolific poet, publishing no fewer than eighteen collections of poems). She gave the feminist movement one of its most potent slogans: “No More Masks” (from “The Poem as Mask”). Her reading style is both casual and classical, and her poems will strike today’s readers as the most clearly modern (as opposed to modernist) on this CD. Section IX of her long poem “The Speed of Darkness” is a capable summation of the life works of the five authors in this excellent collection:

Time comes into it.
Say it. Say it.
The universe is made of stories,
not of atoms.