From the [correct] Chinese

Thomas Merton, whose The Way of Chuang Tzu is perhaps one of America’s better-known translations from the Chinese, begins that book by explaining his “translation” process was essentially “’imitations’ of Chuang Tzu, or rather, free interpretative readings” culled from “four of the best translations of Chuang Tzu into western languages.” Ernest Fenollosa, whose translations provided the basis for Ezra Pound’s Cathay, knew little Chinese. Kenneth Rexroth translated his 100 Poems From the Chinese not from original texts, but from botched translations of the originals. The result? A “tradition” of “Chinese” poetry written by westerners that owes little to what was actually written so many hundreds of years ago. It is only now we come upon Sam Hamill’s welcome, lucid and compelling analysis of the problem with translating from the Chinese, dissection of the flaws of his translator-forebears, and collection of poems translated with the utmost integrity.[private]

Some might wonder what integrity has to do with translation, thinking the act an exercise in redux, in artistic license, in updating old echoes into fresh voices befitting our time. Then one comes across examples like these, provided by Hamill in his introduction: Pound’s “Separation on the River Kiang” actually means “Separation on the River River,” kiang meaning river in Chinese. William Hung translates a line of Tu Fu as “Such is indeed the shining grace of God,” perfectly ignoring the fact Tu Fu would never have conceived of “God” in a multitheistic society. The encroachment of Western ignorance, both cases, and taintors of otherwise exciting and groundbreaking imagistic and aural work.

Hamill is right to criticize Pound and Hung, and not only on those grounds. Any cursory readings that compare Hamill’s book with others–especially Cathay–will unearth what can be called the style and language divide. Some translators’ choice of diction and structure, for example, don’t mirror that which would ostensibly fit Chinese speech, settling instead on seemingly anglocentric expressions, word choices and rhythmic patterns. For example, Pound’s version of Song 5 of the Shih ching (Book of Songs, ca. 600-200 B.C.) is a preposterous hodgepodge of vernacular and inversion fit more for the ponderosa and Parliament than China: 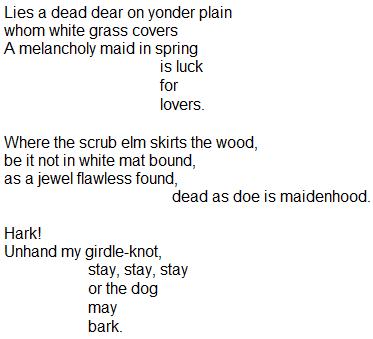 Contrast the above Pound offering with Hamill’s translation of a poem dealing with similar subject matter: the intrepid traveler, dwarfed by a great natural landscape, embarking at the same time on the inner journey, finding in the physical environment a sort of spiritual instruction and guidance. It’s clear the poet Pound translates must be mis-translated: as seen in Hamill’s piece below–and indeed in most every poem in Crossing the Yellow River–we’re dealing with straightforward, image-oriented poets whose personae are not nearly as presumptuous or verbose as Pound’s, poets content in the belief that less is more:

Hamill’s rendition of Wang Po is reminiscent of the voices and personae found in the Ch’u, filled with long narratives and epic-like poems, spoken by stoic yet fallible personae which Cyril Birch in his Anthology of Chinese Literature called “incorruptible”–see Arthur Waley’s sections from the Book of Songs, or David Hawkes’s translation of Songs of Ch’u, to name some examples. On the other hand, Pound’s many machinations–among them, obtuse breaks and enjambment, and tin-eared end rhymes–are simply too impressionistic and precious, the traits of a pedant rather than a peasant. They don’t jibe with the plainspoken, hardened, sympathetic Everymen like Wang Fan-chih, for example: 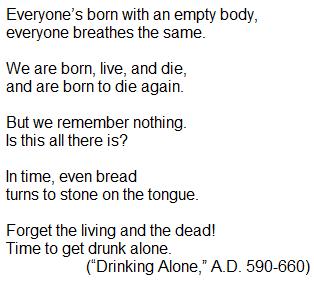 While Pound’s invention is interesting, accuracy can not be discounted when dealing with many Chinese poems, which are short to the point of being terse and fragmentary–and therefore bound to suffer complete and total contortion and distortion when Western eyes try to force upon the long-gone Chinese bards their own sensibilities. In his introduction, Hamill cites a particular Basho haiku as an egregious example of careless translation–and of translators’ proclivity to end poems with formal closure, in the process overlooking the author’s original perception and therefore, intention for writing the poem. “An old pond. / A frog leaps in. / Kerplop!” is the embarrassing translation, which Hamill proffers (convincingly) should read, “At the ancient pond / a frog plunges into / the sound of water.” This translator, as well as others, “missed the poetry,” Hamill says. And so it goes with Pound, Hung, Fenollosa, Rexroth and Florence Ayscough, who make a range of formal errors (e.g., ignoring the classic Chinese end-stopped couplet) and stylistic missteps (e.g., wordiness, “Victorian [and Modernist] baggage,” etc.) in Hamill’s eyes. Considering his uncanny attunement to the old masters’ clarity of thought, Hamill’s translations are more convincing. Take, for instance, the clunky and a-musical syntax in Witter Bynner’s version of Tu Fu’s “A Song of War Chariots”

The war-chariots rattle,
The war-horses whinny.
Each man of you has a bow and a quiver at his belt.
Father, mother, son, wife, stare at you going,
Till dust shall have buried the bridge beyond Ch’ang-an…

and contrast with the clearer, unbroken Hamill version (which he calls “A Song of the War Wagons”):

Wagons clang and horses cry
As soldiers pass with bows and arrows.
Families clamor to watch them go.
A huge cloud of dust swallows the trembling bridge.

Not preoccupied with making his own stamp on the poems he translates, striving for simplicity and clarity, and too learned to translate from inaccurate and sloppy versions of the original texts, Hamill’s attempt at faithful reproduction is commendable. The results–hundreds of poems spanning hundreds of years, including large sections devoted to favorites Tu Fu, Wang Wei and Li Po–are smooth, spare, haunting. Among them, the bombastic Wang An-shih (“You want an assessment of this life? Ha! / Thirty-nine long years, and not a thing to show”), the romantic Li Ch’ing-chao (“Flowers fade alone. Rivers flow alone. / Only our longing is shared”), and the anonymous singers of a series of “Taoist Songs” (“Heaven and hell are men’s unhappy inventions, / as the ancients intended”). Hamill’s 30-odd years of devotion to the Chinese, coupled with his Zen practice, have tuned his ears and mind to a near-authentic state; he has become the poets he translates, rather than the translator who, wittingly or not, usurps the original, vital and ultimately inimitable voices.[/private]