Despite the freedom in his fourth book–plentiful sectioning of poems; spatial liberalism (experimentation with enjambment, spacing, indentation); lofty language; the use of up-to-the-second names and places–Bruce Beasley has written a piece of supreme symmetry, has crafted an architecture so streamlined as to be the subject of a Charles Sheeler gelatin print.

“Signs and Abominations” is a book of intersections, of vantages, of careful dovetails that complement and reflect those around them. It is a careful, well-thought and highly ambitious treatise on the interrelation of the Profane and the Sacred; it is a fervent interrogation of Religion, a claim that the institution can’t function without the art that works to react or reflect against it.[private]

One would think the polemic employed by an artist battling the art-leery–Rudolph Giuliani and Tipper Gore, ridiculously enough, come to mind when reading “Signs,”–would eschew imagery for the pedant’s elevated speech. Thankfully, Beasley takes up the call to arms wielding a coherent non-linearity, cogent intersplicing of linguistic and stylistic modes, and a synchronic sense of the generations’ ideas on man being an “imperfect split” from God–the heart of the matter: 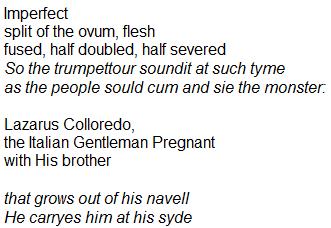 In what turns out to be more fun than lecture, his methods actually re-invigorate the “What is art, what is God?” argument–one that’s only been stewing for, oh, say 3,000 years.

In painterly fashion, Beasley sets the reader in different corners, in different lights, on different branches, from which to view the argument. A run-down of the words used in poem titles will provide an adequate idea of the structures Beasley uses not only to contain the poems but to look upon their subjects from many angles: “Prayer[s]” and “Unprayer[s],” “Fragments,” “Sermons,” “Spiritual Alphabet,” “Diary,” “Hyperlinks,” “Self-Portrait[s].” The book itself is segmented in 5 sections, not counting the proem “Forerunner.” Copious “Notes to the Poems” provide more definitive strata. Numerical sections and letters, epigraphs, word definitions and devices like “Negatives” and “Alters” further delineate and break poems apart.

These are not gratuitous devices but rather little containers that latch together, creating a seamless, directorial shifting between scenes. They also point to the inherent difficulty of communicating the “inside” of the “mystery” (see Beasley’s idea of mystagogia below).

To Beasley, Andres Serrano, Kafka, Kierkegaard, Dickinson, Ekhart, and countless others seen as projectors of abomination (either in their art, or feelings toward themselves or humankind; “For admiring myself / I loathe myself, / Michael Wigglesworth wrote in his diary,” pp. 63) become sympathetic figures in the struggle against the guilt and stigma brought about by being creators, dissenters.

incongruity of numinous substance and world… 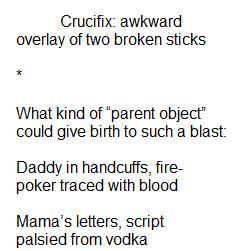 Blurring ages-old lines is just the least of what Beasley does. He has, in effect, created his own mystagogia, the very word he used to name his third book–a word he uses in the epigraph of its title poem to mean “the period immediately following the initiation into a mystery.” This is not a book of heresy, not the easy rumination-in-the-mirror on some “tattered soul”–“Signs and Abominations” is the present and future of poetic, theoretical thought; it is indeed the best road map yet for divining the mysterious relationship between the human and ethereal energies.[/private]